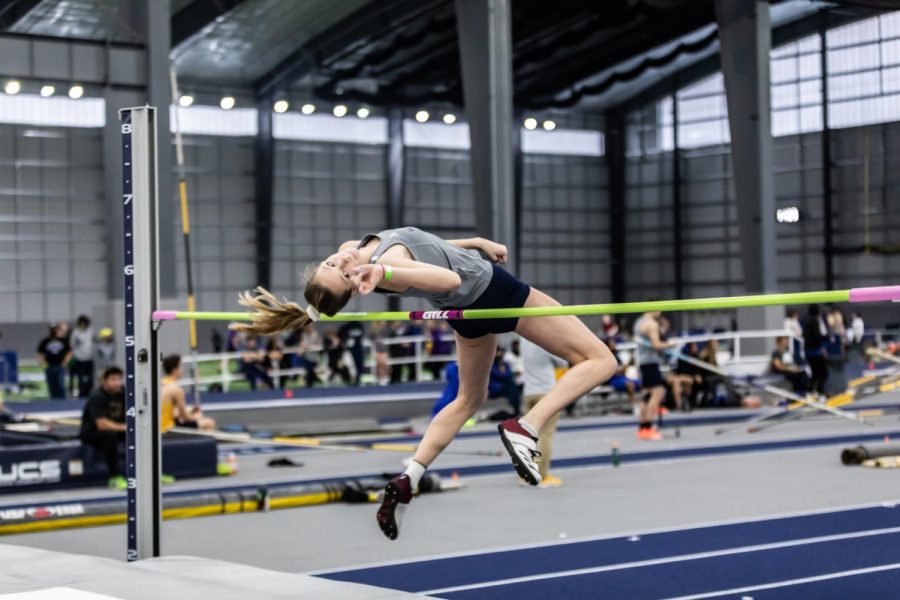 Catching some air: Washburn's Skyler Saunders clearing the bar in the high jump. Saunders competed on day two of the Washburn Open on Saturday, January 30th.

Putting together a track and field meet is no small task, behind every event there are a group of people who help to make it possible. Whether it is returning a weight that was thrown, recording times, or even catching a fallen pole, it is the job of these volunteers and staff to keep everything on time and as organized as possible. In a year like this one those people are as important as ever.

With no spectators allowed at track and field meets due to COVID-19, opportunities for family and friends of athletes to watch them compete were limited. Due to that, some decided if the only way they were going to be able to watch was to help with the meets, then that is what they were going to do.

“Not even just parents like, friends, roommates, boyfriends and girlfriends, have come out and have been a really big help,” said Alex Coleman who is a graduate assistant coach on the Washburn track team and is in charge of coordinating with volunteers.

One of those parents was Todd Bolin who, along with his wife Tammy, volunteered to help with the pole vault event so they could watch their daughter, Tassilyn Bolin, who is a freshman pole vaulter at Washburn.

“We wanted to come see our daughter compete so that’s why we volunteered, and we will probably try to every meet that we can,” said Bolin.

That availability will be valued by people like Coleman going forward because she believes that meets this year will require a longer list of volunteers to choose from due to the need to pass a health screening test.

The day of a volunteer is not a brisk one either, and with meet days lasting roughly twelve hours it is easy to see how the number of volunteers needed begins to add up.

While the preparation and time commitment from athletes for meets is unmatched it would all be for naught if it were not for the volunteers keeping everything moving forward. In a year with such unique conditions, the way that people have come around to help the student athletes has left a noticeable impact on Washburn sports.