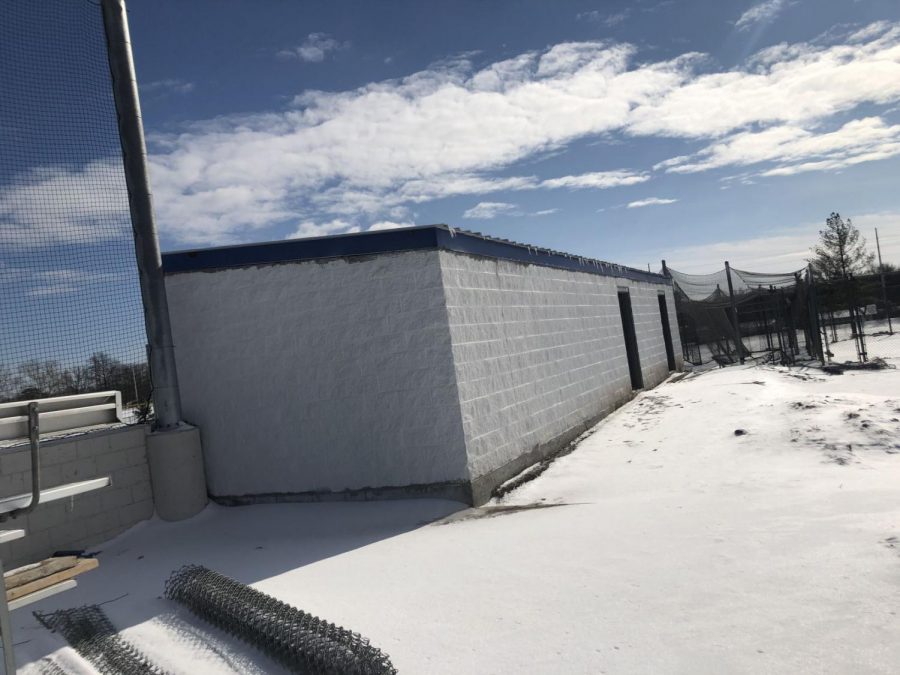 Upgrade alert: Construction of the new softball dugouts continues. The facilities haven't had major upgrades since before the 2001 season.

While driving down 19th St. through campus, students may notice a change happening on the softball diamonds.

Since the original construction of the field in 2001, there haven’t been any new major renovations. During the construction, they added restrooms, press box, concession stands, storage and the second level working press area. Before the 2002 season, the field received a new sound system.

Head coach of softball, Brenda Holaday said the changes coming in the near future are long overdue.

“When you look at the current field, the first thing you think is, ‘this isn’t a college softball field.’ When you compare it to other fields, really we have a lot to get done to bring it up to standards,” Holaday said. “Last year, we got the new wall up. The main project this year is the dugouts, because most other teams have stone dugouts. We’re getting a much needed storage area also, since 1/3 of the dugout is actually for storage.”

Senior Savannah Moore agrees with Holaday when it comes to the discouraging comparison to other softball facilities.

“I got kind of used to the old fields, but going to other fields, I was always envious,” Moore said. “I think the new additions will make the field look exactly how this team is, maybe even better.”

The new dugouts are nowhere near the final touch for the softball program.

“We’re trying to move forward with the artificial turf field so we’ll look like a real college field,” Holaday said.

As far as the season goes, Moore thinks the field is just the beginning of the team’s new look.

“We’ve been working really hard, I’m really excited,” Moore said. “We’re going to be facing some challenges but I have no doubt we will be successful with those.”

Opening their season next week in Texas, Holaday expressed her faith in the hard work of her players during the offseason.

“We returned a big share of our players from last year so our expectations are certainly high. We have six seniors, all big time players, along with some transfers and incoming freshmen. We have a great group of leaders who take ownership and have high expectations for themselves and the whole team,” Holaday said.

As the season progresses, hopefully so will the evolution of the diamonds. Holaday looks forward to the new changes.

“The next move should be getting the turf field put in, bleachers and lights.”