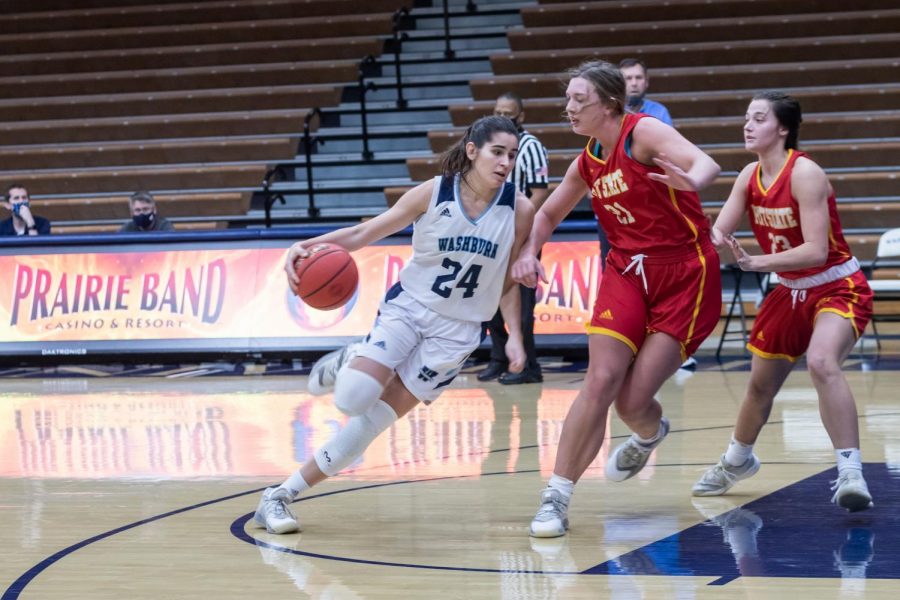 Hoop Dreams: Washburn’s junior guard Nuria Barrientos driving the ball in towards the basket to make the play. Barrientos had a total of 11 points against the Pittsburg State Gorillas.

After a hard-fought win against Missouri Southern State University on Thursday, the Washburn University Women’s basketball team looked to leave the week undefeated and with a winning record for the first time this season. They would face a difficult challenge as their opponent would be the Pittsburg State Gorillas who entered the game with a record of 7-3 and riding a six-game winning streak.

Unlike last game it was defense that was giving the Ichabods struggles to begin as Pitt State scored 16 points in just the first six minutes of the game. At the end of the quarter, Washburn was able to flip the script as their offense came alive, giving them a 18-17 advantage after the first ten minutes.

Neither team was able to take control in the second quarter as the Ichabods stayed just ahead of the Gorillas the entire quarter but never led by more than four points. Washburn had balanced scoring across the lineup as five players scored at least five points in the first half, led by senior Hunter Bentley’s seven. That offense gave the Ichabods a slim lead of 36-34 as the game moved to halftime.

The Gorillas came back at the start of the third quarter tying the game at 40 just before the Ichabods had a three fall for junior Nuria Barrientos followed by a three-point play from Bentley to bring the lead up to four. Just like in the first half, the Gorillas would not go away, and Washburn’s lead could never get higher than seven points before closing the quarter leading 50-48.

In the fourth quarter, Pitt State was finally able to overcome the Ichabod’s lead after a three pointer fell with just under eight minutes remaining. The Gorillas continued to go on what would be a 13-0 run before it was ended with a Hunter Bentley layup.

The Ichabods were able to continue to respond and tie the game at 56 after a shot from Bentley who ended the game with a team high 16 points. The Gorillas would take a two point lead all the way down until 9.2 seconds remained when Barrientos hit a shot in the paint to tie the game before it would ultimately go to overtime tied at 58.

In overtime, the teams traded baskets before Tristan Gegg would hit two threes in the final three minutes that would prove to be the difference. A few missed free throws from Pitt State left the Ichabods with a chance to recover but the shots were not going down as Washburn would end up falling 69-61.

“We should have won that game, honestly the way we played, and defended we should have won, we just didn’t finish like we needed to,” said Washburn Head Coach Ron McHenry.

The Ichabods will be back in action on Tuesday, January 19 when Lincoln University of Missouri will come to Lee Arena.