Washburn Men’s Basketball gets back on track with win 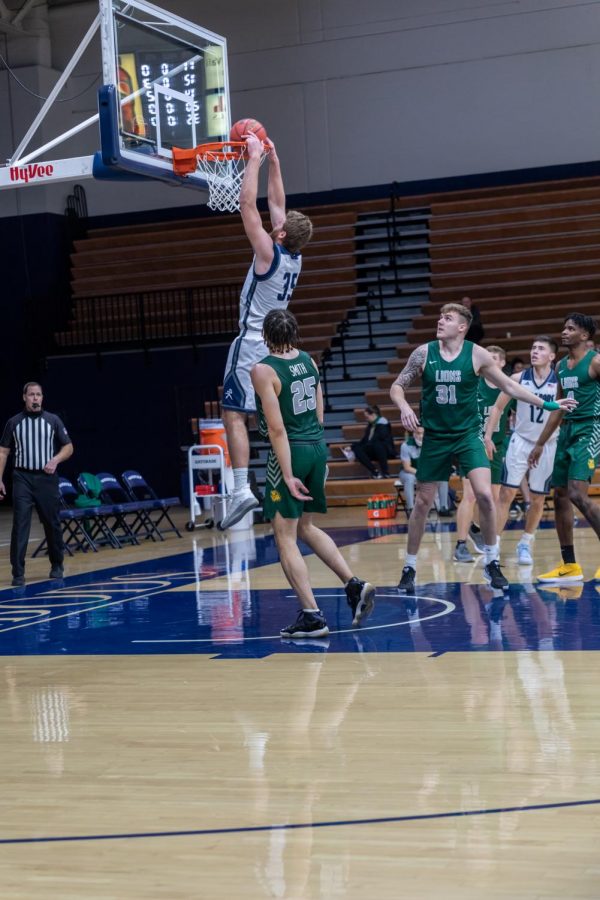 After suffering its first loss of the season the Washburn University Men’s basketball team aimed to get back on track as the Missouri Southern State University Lions visited Lee Arena. The Ichabods entered the game at number eight on the NABC coaches poll but were decimated by injuries in their last game and faced a Lions team that was picked to finish second in the MIAA before the season began.

Being forced to a small lineup meant that Washburn was going to push the pace at every opportunity and the Ichabods did. When it didn’t come in transition most of their shots were coming from deep, and they were going in. In just the first ten minutes Washburn was able to connect on five threes coming from four different players.

With Washburn’s lack of size Missouri Southern was able to feed the ball inside to their leading scorer Cam Martin who led them with 19 points at the half. On the other end it was senior Tyler Geiman who took control for the Ichabod’s down the stretch of the first half. Geiman’s 16 points were crucial, and a team high in the half, but his penetration into the defense set up even more open looks for the offense.

“My job is to give them (teammates) confidence and stay in attack mode because that allows everyone else to do the same thing,” said Geiman.

That offensive focus to go along with an aggressive style of defense led to a 47-33 halftime advantage for the Ichabods.

The Ichabods came out of halftime even hotter than they entered it with an alley-oop to senior Jace Williams on the first possession followed shortly after by back-to-back threes by junior Jalen Lewis, all three baskets which were assisted by Geiman. The hot offense continued as Washburn’s lead quickly ballooned to nearly 30 points.

“I challenged them a little bit in the halftime speech and I think that first five minutes was really important,” said Washburn Head Coach Brett Ballard. “We came out and played well and kind of put the game a little bit and that set the tone for the rest of the game.”

Even after the offense slowed down later in the half it was the defense that picked up forcing turnovers and creating tough shots. Once the shots began falling the lead crept up to and more than 40 points, peaking at a 41-point advantage.

Five players finished with at least two made threes on the night, including six from freshman Levi Braun, who scored a career-high 19 points, and a perfect 5-for-5 night behind the line for Lewis. Those two performances were key to Washburn’s 51 percent shooting from deep for the game which was too much for the Lions to overcome as the Ichabods cruised to a 99-58 victory.

The win puts the Ichabods at 9-1 on the year, and they will get a chance to get into double digits when Pittsburg State University will be looking for revenge when they travel to Lee Arena on Saturday.