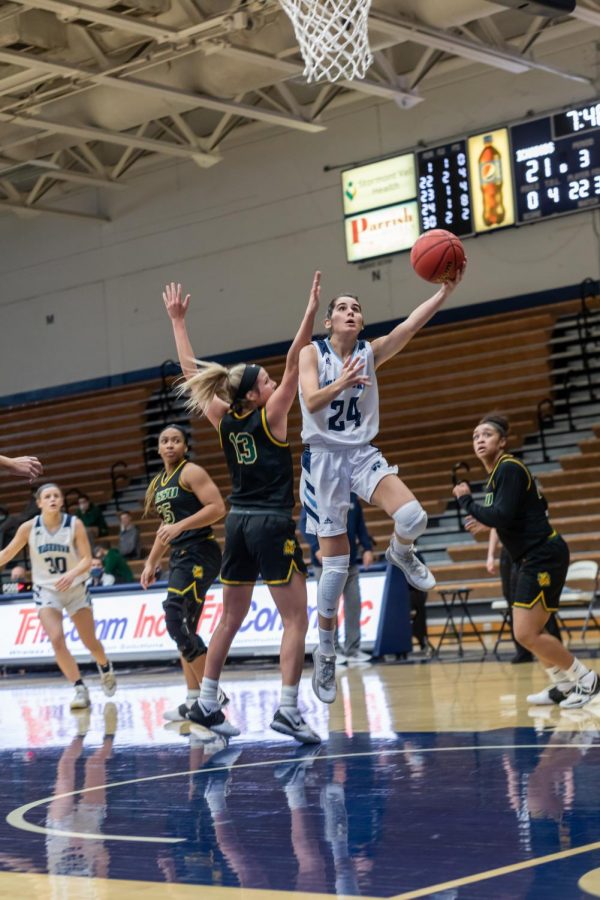 Hoop Dreams: Washburn’s junior guard Nuria Barrientos fighting through the Lions defense for the easy two points. Barrientos had a total of 12 points during the game against the lions.

After a road win against Missouri Western State University the Washburn University Women’s basketball team returned home for their first game of the new year. Washburn entered the game at 3-4 and was looking to get back to .500 for the first time since the opening game of the season. To do so they would have to beat Missouri Southern State University who came into the game 4-4 overall and winners of four of their last five.

The first quarter was all about attacking for the Ichabods as they took every opportunity they could to attack the basket against the Lions. On the other end, Missouri Southern struggled to score but its size led to offensive rebounds which kept them in the game as they trailed 15-12 at the end of the first quarter.

Some of those offensive rebounds turned into turnovers from Missouri Southern in the second quarter leading to fast break opportunities for Washburn which was most of the offense that the Ichabods could muster for the quarter, scoring only six points. Even with the offensive struggles Washburn was able to hold Missouri Southern to 28 percent shooting in the first half so that going into halftime the Lions only had a 21-22 lead.

“If you are struggling offensively you can’t struggle defensively too, so you better have all of those things, the defense, the toughness, so we are kind of hanging our hat on being tough and doing those things,” said Washburn Head Coach Ron McHenry.

Coming out of the half the Ichabods went back to their strategy from the first quarter of attacking the basket which led to 14 free throw attempts in the quarter. With their stout defense from the first half carrying over, and a late scoring burst from sophomore Abby Oliver who led the team in scoring with a career high 19 points, Washburn was able to regain control and enter the fourth quarter leading 37-33.

The Ichabods did not stop there though, as the fourth quarter went on, they continued to build on their lead which got to a game-high nine points with just under three minutes remaining in the game. Down the stretch it was clutch free throw shooting by senior Hunter Bentley, who finished with 15 points, and a defense that held Missouri Southern to under 33% shooting for the game that allowed Washburn to secure a 56-49 victory.

With the win the Ichabod’s advanced to 4-4 on the season as they get set to face Pittsburg State University on Saturday when they travel to Lee Arena.