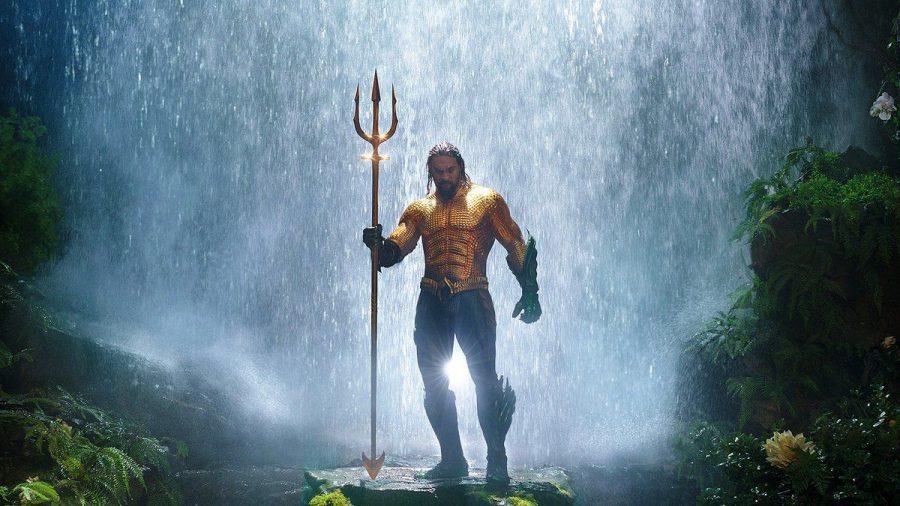 50/50: James Wan's "Aquaman" is a perplexing film, action and visuals are great fun, but the rest of the film is very lacking. Pictured is Arthur Curry (portrayed by Jason Momoa) the poorly written and acted protagonist of the film.

This may be the best DCEU film yet.

The DC film shared universe has had an absolutely terrible losing streak. “Suicide Squad,” “Batman v Superman,” “Justice League” and the like were all marred with a multitude of problems, and are genuinely bad movies. So far the only successful DC film was “Wonder Woman,” directed by Patty Jenkins. Just like “Wonder Woman,” “Aquaman” stands out among the rest.

Directed by James Wan (“Saw,” “The Conjuring”), “Aquaman” is about Arthur Curry, son of a human and Atlantean woman (portrayed by Temuera Morrison and Nicole Kidman) who has superhuman powers such as strength, the manipulation of fish and tides, and really fast swimming. He is of course portrayed by Jason Momoa, and I still love the Rob Zombie and Jason Momoa look. He is shoved into a save-the-world plot involving underwater politics, Indiana Jones-type globe trotting and a host of other amalgamations.

The basic gist is that Orm (Patrick Wilson), Arthur’s half brother, wants to take over all of the ocean and declare war on humanity. Then there is another villain, although a less used one, named Black Manta, portrayed by Yahya Abdul-Mateen II, who has a grudge against Arthur. The plot is startlingly similar to Marvel’s “Black Panther” but the protagonist and antagonist roles are reversed.

Most of the film is dedicated to Arthur, and Mera (portrayed by Amber Heard), an Atlantean princess with strange powers. The characters fight and travel their way through beautiful underwater areas and around the globe, visiting places like the Sahara and Italy. That is where the film absolutely shines, visually and action-wise.

The CGI in this film is heavy, but I absolutely enjoy it. It really blew away my expectations. Combined with great costume design, this led to quite a spectacle that I have never really seen before in a movie. Much of the film is set underwater, and for the most part it works, only one time did I notice a tiny flaw with the CGI. Visually, I can see kids absolutely loving this film, even more than I did. I was thoroughly impressed in stark contrast to some of the previous films. Normally, I don’t make a big deal about costume design, but in combination with other VFX this film was on another level, from Arthur and Orm’s suit designs to even Atlantean Guards, I enjoyed all of it as the effort and creativity really showed.

I also have to gush about the action. Usually I’m not impressed by superhero action with the exceptions being “Daredevil” and “The Punisher,” but these were awesome. They were long takes that hit hard and really left an impact. There was absolutely no shaky cam and I enjoyed every single one. When not talking, Aquaman punching fools had a weight to it, and this can be applied to other characters and their fight scenes.

In between the action is where the film’s problems occur. “Aquaman” is over two hours long, and it really showed. While there were plenty of plot points, near the end there were moments where I was checking my watch to see what time it was. I can’t put my finger on it, but even though it doesn’t have a bunch of filler, this film definitely felt a bit too long.

There are also some major issues with acting and writing, and while “Aquaman” is better in some respects, certainly more than “Suicide Squad” and “Dawn of Justice,” there are still some incredibly forced dialogue and plot points. Jason Momoa, while he unquestionably looks the part and brings physicality to the role, is a weak actor. He will crack jokes and deliver lines, but he really doesn’t have the charisma and likability of Bruce Campbell, Arnold Schwarzenegger or more recently Chris Pratt, as this film is definitely going for a Star-Lord type Aquaman. He seemed at points to phone the performance in and at others to really try, but nevertheless, it pulled me out of the experience.

When there isn’t questionable acting, there is certainly questionable writing. Amber Heard’s performance as Mera started out great, and she really wasn’t given good content to work with, leading me to want to see her with good content before I can form a proper opinion on her acting.

The proven great actors are also given questionable material with Patrick Wilson being provided the worst. While he does his best with what he is given, there are some truly awkward moments with him because of the writing. However, there were a number of times where I got into his role, and being an actor I admire, I’m glad his acting skills could rise above the poor writing in places. Then, there is Abdul-Matteen’s Black Manta. I loved this guy’s character and acting, and I enjoyed every time he appeared. He might be my favorite performance in the movie, but even he wasn’t spared from the dialogue.

Another problem I have is with the soundtrack. Typically, I don’t outright criticize a film’s soundtrack, and the movie had some I enjoyed. There were some Synth elements which totally matched the setting, and I was pleasantly surprised. Sadly, Rupert Gregson-Williams’s score is more generic than that with the usual superhero orchestra music playing rather than the fun synth music. To top it all off, there is an “Africa” cover by Pitbull, which led me to cringe and sort of laugh more than anything.

All in all, “Aquaman” is visually mesmerizing and has awesome action. It really seems to be up there with “Wonder Woman” and “Man of Steel” as the best DCEU movies. However, it is certainly easy to be better than a movie like “Suicide Squad” so its faults really can’t be ignored. Momoa’s acting and the writing in general led me to never completely suspend my disbelief, and there were notable problems even down to a soundtrack that began unique before falling flat. That being said, I think general audiences and children will love this movie. If I had been a kid when this was released, this is the type of movie I would watch over and over. I can definitely see this film being a crowd-pleaser to the majority, but it still suffers some incredibly large problems that keep it from being a fantastic film.