‘The Punisher’ season 2 review: Up is down, and black is white 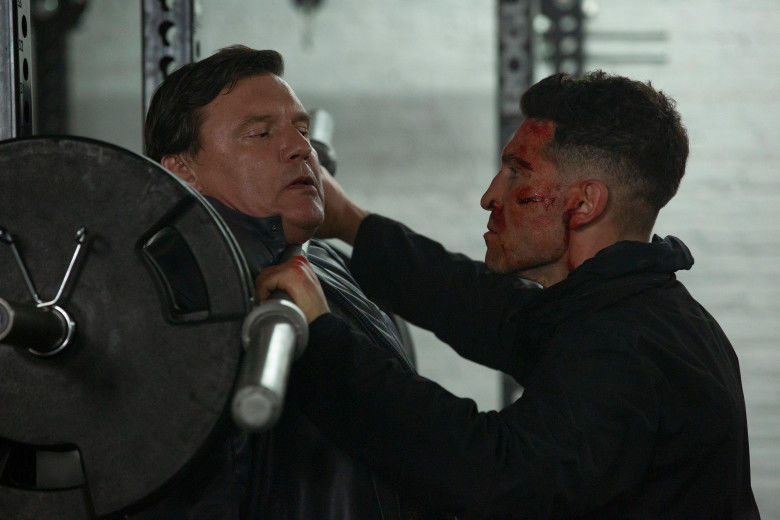 Without Remorse: Cancellation imminent, 'The Punisher' is still well worth watching and my favorite section of the Marvel umbrella. Pictured is Jon Bernthal as Frank Castle, using a barbell for unintended purposes on Russian goon Kazan (Illia Volok).

At least we got another season, right?

The second and likely last of “The Punisher” has arrived. While the first was a continued origin story, which in some aspects I liked and others I didn’t like at all, I was excited as a fan of the character to see him in his travels after the origin story.

Everyone knows the story of Marine Corps veteran Frank Castle avenging his slain family, and season 2 depicts Frank after he tied up all the loose ends. Given a chance to be a civilian again, Frank has stopped doing the Punisher thing and is just drifting around the country aimlessly, but gets dragged back into the fight. Wolverine had Jackman, Superman had Reeve and the Punisher has Jon Bernthal. It should really come to no surprise that Jon Bernthal elevates the character to something really incomparable to the comics, and he continues to give the role so much passion that is truly admirable. He is joined by returning cast members such as Jason R. Moore, Ben Barnes and Amber Rose Revah, as well as newcomers Giorgia Whigham, Josh Stewart and Floriana Lima.

One thing I absolutely enjoyed were the performances. Bernthal speaks for himself, but Whigham’s performance as a young woman Frank becomes a surrogate father toward was overall really enjoyable, and those two bouncing off each other was fun.  Barnes is unquestionably of the same caliber as Bernthal, and he really is just fun to see perform.

The problem is that some of the material is wasteful and drags on artificially. Josh Stewart’s character, Pilgrim, is a sovereign citizen wacko-type with a twisted religious bent, but it really feels like a wasted opportunity. The character, and that of Whigham’s Amy, both have some comic inspirations but mixed together it just feels ify as the story behind it isn’t strong and feels watered down for television, considering the source material found in writer Garth Ennis’ work.

I have to talk Barnes further because he deserved better in terms of makeup. His character is supposed to be horrifically disfigured.  There was definitely some miscommunication between writers and makeup, because he is given just a tiny amount of scarring when it is painfully obvious that was not the intention as the first season set him up to be the opposite. The character Billy has scenes that are written to react to his face as some sort of mangled, grotesque mess when it is just Barnes with some scars.

Considering the show is probably cancelled after this, I really tried to savor my time with it. Jon Bernthal immortalizes Frank Castle, and even surpasses the comic in giving the character so much depth and complexity that he never had before. The show has a ton of issues, but I still think it is worth watching just to see Bernthal, Whigham and the rest of the cast perform.