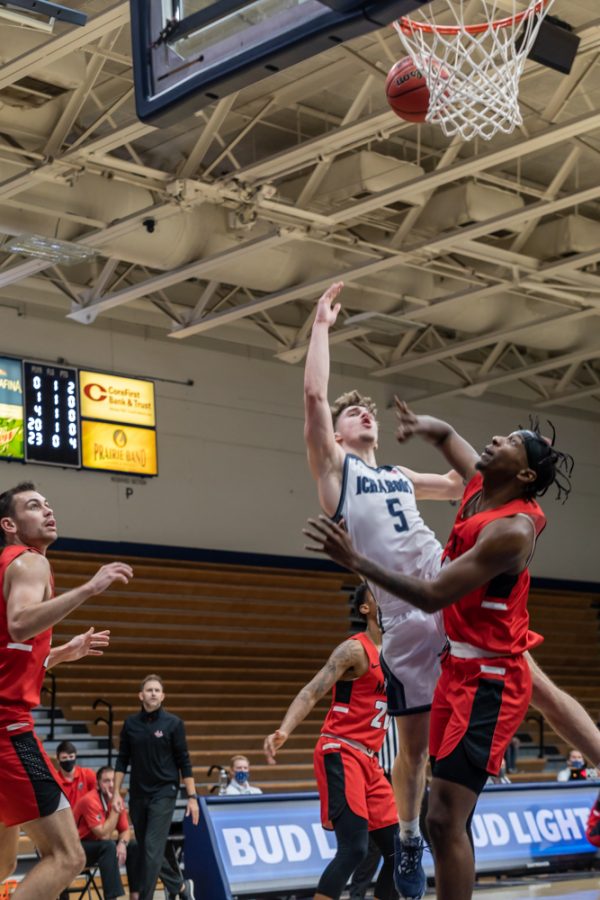 Taking the hit: Washburn’s Senior guard Drew Maschoff driving in for two and getting fouled. Maschoff had a total of 14 points during Thursday night’s game.

The Washburn University Men’s basketball team put their perfect 5-0 record on the line Thursday night when they hosted the University of Central Missouri Mules. The team was also looking to improve on their number ten NABC ranking acquired at the beginning of the week. While Washburn sat atop the conference standings the Mules came into the game at 1-4 on the season, having dropped two in a row.

The Ichabod’s wasted no time imposing their will with a balanced scoring attack and sound defense as they jumped out to a 22-6 lead in just over nine minutes. That defense would not let up, forcing Central Missouri to shoot just under 27% from the field in the first half, including 0-10 from three.

With 5:11 in the half one contributor to the hot start, junior forward Jonny Clausing exited the game holding his lower back after being fouled inside and would not return for the rest of the game.

“Don’t know yet, kind of back spasms so we will see, hopefully nothing major, doesn’t seem to be anything structurally so we will see how he is feeling tomorrow,” said Washburn Head Coach Brett Ballard.

Without their inside presence, the passing of Washburn became key to their strong start as the Ichabod’s assisted on 12 of their 13 baskets in the first half. Many of those assists were thanks to the hot shooting from outside as Washburn was able to connect on seven nine pointers in the first half, including four from freshman guard Levi Braun. Braun’s 12 first half points were part of 46 for Washburn, giving them a 46-25 lead going into the break.

Washburn’s offense stagnated to begin the second half as they were held scoreless for the first three and a half minutes while Central Missouri went on an 8-0 run. While the offense for Washburn was able to respond thanks to some outside shooting, without Clausing Central Oklahoma continued to feed the ball inside. Washburn was forced to foul inside and the resulting free throws helped keep the Mules in the game.

“We don’t panic, our team knows how good we are and we know that we can do anything once we come together,” said senior Guard Drew Maschoff who finished the game with 14 points and nine rebounds.

And panic they did not, after a personal 4-0 scoring run and drawn charge by Connor Deffebaugh, the game opened up for Washburn giving them a 15-point lead with just under six minutes left in the game. The Ichabod’s continued their balanced scoring attack, which ended with four players scoring in double figures led by Jalen Lewis who had 16. In the end Washburn was able to extend their lead back to what it was in the first half giving them an 80-60 victory.
Washburn will be back in action Saturday afternoon playing host to the Lincoln University of Missouri Blue Tigers.