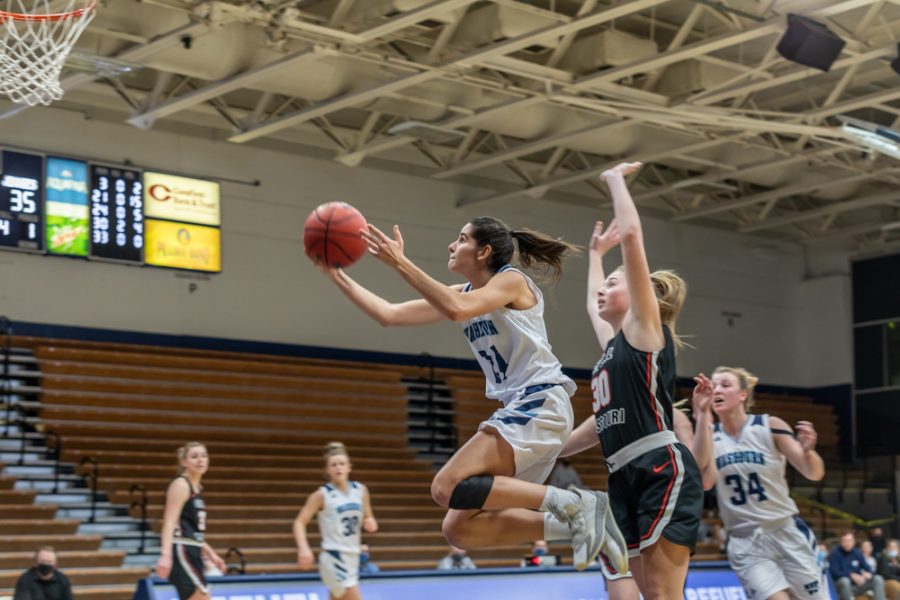 Hoop it up: Washburn’s junior guard Nuria Barrientos taking it to the bucket against the Jennies defense. Barrientos had a total of 14 points in Thursday night’s game.

Following the Ichabod’s biggest win of the season last Saturday against Rogers State, Washburn looked to keep up their momentum on Thursday when they faced the Jennies of Central Missouri. The teams first win streak would not come easy as Central Missouri entered the day with a perfect 5-0 record and in first place in the league.

The game began with both sides looking to push the tempo with varying degrees of success. Each team made quick passes with lots of movement, but the shots were not falling for Washburn early on, shooting just under 32% in the quarter. Central Missouri was able to take advantage thanks to four first quarter threes from Charley Bovaird giving the Jennies a 20-14 lead after ten minutes.

“We were trying to zone it up and take away the perimeter (…) but a shooter like that doesn’t need much time and she stroked it,” said Washburn Head Coach Ron McHenry.

Each side slowed down the pace in the second quarter and the methodical offense of Central Missouri was able to take over the game early on. In the minutes before halftime their defense locked, allowing Washburn to only score eight points in the quarter, including only two in the final 4:30. By halftime, Central Missouri was able to extend their lead to 16 points, leading 22-38.

Coming out of halftime Washburn was able to get back to their first quarter offense, pushing the pace when they could. Central Missouri began moving the ball inside when they could and Washburn responded well, holding the Jennies to only four minutes in the first five minutes of action.

A basket from sophomore Abby Oliver Washburn was able to cut the lead down to eight just over halfway through the quarter. Once starters returned for Central Oklahoma, they were able to regain control of the game leading 38-52 as the game moved to the fourth quarter.

The offensive struggles returned for Washburn in the fourth quarter as they were held scoreless for the first six minutes of the half. The defense was still active for the Ichabod’s, forcing Central Missouri to commit 20 turnovers in the game.

The lack of offense, particularly outside shooting, was the problem for Washburn as they finished the game with only two three pointers. Junior Nuria Barrientos was the only Ichabod to reach double figures, finishing with 14 points. These struggles ultimately led to the Ichabod’s 45-67 defeat as Washburn fell to 2-4 on the season.

“That’s why scoring was hard, because we didn’t have many easy baskets, and the shots we had we couldn’t knock down,” said McHenry.
After their Saturday matchup against Lincoln University of Missouri was postponed the next time the Ichabod’s will see the floor is January 2 when they travel to take on Northeastern State University.