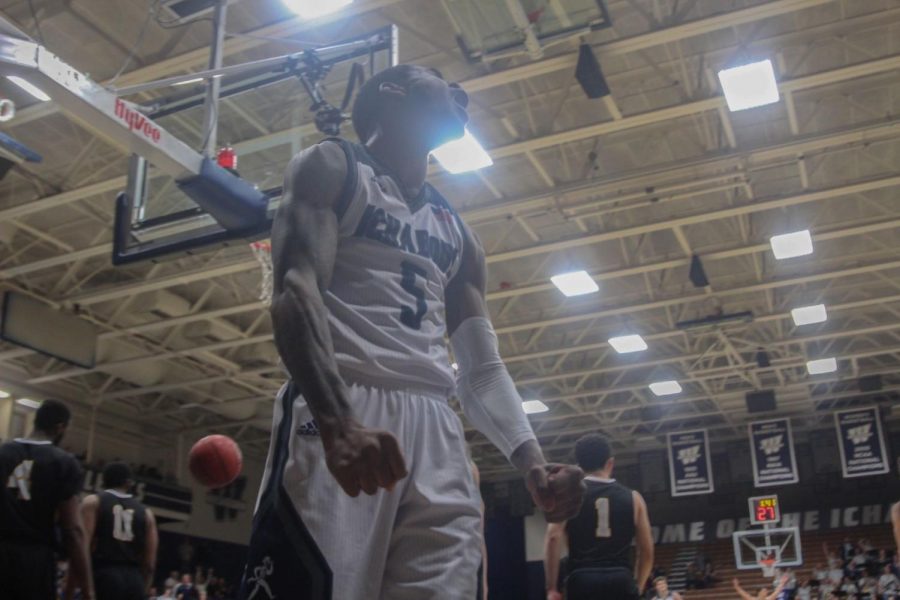 Fired up: Javion Blake shows his emotions to the crowd. The Ichabods defeated Fort Hays State on Saturday, Jan. 19.

Following the women’s team, men’s basketball took on the Fort Hays State Tigers in the NCAA Game of the Week on Saturday. The two rivals last played on March 3, 2018, where the Ichabods came out on top handling Fort Hays State, 77-53. This battle was no different as the Ichabods defended the home turf, 80-73.

After halftime, the Ichabods’ lead grew as senior forward David Salach knocked down a layup and sophomore forward Will McKee nailed a three-point shot.

The Ichabod defense held the Tigers scoreless for the first two minutes of the half until they made one free-throw.

With 15:20 to go in the second half, the Tigers drove down to the paint where, freshman forward Sevon Witt committed a flagrant foul that caused him to be ejected from the game.

For Fort Hays State, that was the key moment to help them get back in the game. The Tigers went on a 16-5 run to retake the lead with 11:05 to go. From there, it seemed as if all of the momentum that the Ichabods had built was gone. The Tigers continued to add to their lead. With 6:47 left in the game, the Ichabods were losing 63-58.

Down 67-61, the Ichabods stole the ball and with it regained the momentum that helped them get back to a tie. A little bit later, Salach backed down his man and was fouled on his shot. He made the ensuing free-throw to bring the Ichabods within one point. On the next play, McKee stole the ball which led to, sophomore guard Tyler Geiman passing the ball to senior guard Javion Blake. Blake took the ball right to the hoop to give the Ichabods a 68-67 lead.

With 33 seconds left in the game, the Ichabods used a 10-5 run to take a 78-72 lead. The Tigers tried to mount a comeback at the end of the game, but it was all for nothing as the Ichabods cleanly ended the game winning 80-73 over the in-state rival Fort Hays State.

Even though there was a blizzard on Friday, the Ichabod fans showed up to see their team play. As an athlete, Salach was happy to see the fans come support the team against the Tigers.

“It was a fun game. It was great to see the fans come out to support us. Even with the icy roads and bad weather conditions, they still came to help us out,” Salach said.

Making a comeback is always a great feeling for a team, and it’s even better when it’s against a long-time rival. The Ichabods were happy with the night’s results.

“Two good teams, battling it out. They threw some punches and we kind of got wavered in the second half,” Blake said. “The veterans got together, and we showed the underclassman that this is what it is like in the MIAA. On any night anyone can get beat but tonight we were lucky enough to pull off the win.”

The Ichabods will travel to Joplin, Missouri on Wednesday, January 23 to face off with the Missouri Southern State Lions. The next time the Ichabods play at home will be on Thursday, January 31 against the Blue Tigers from Lincoln University.