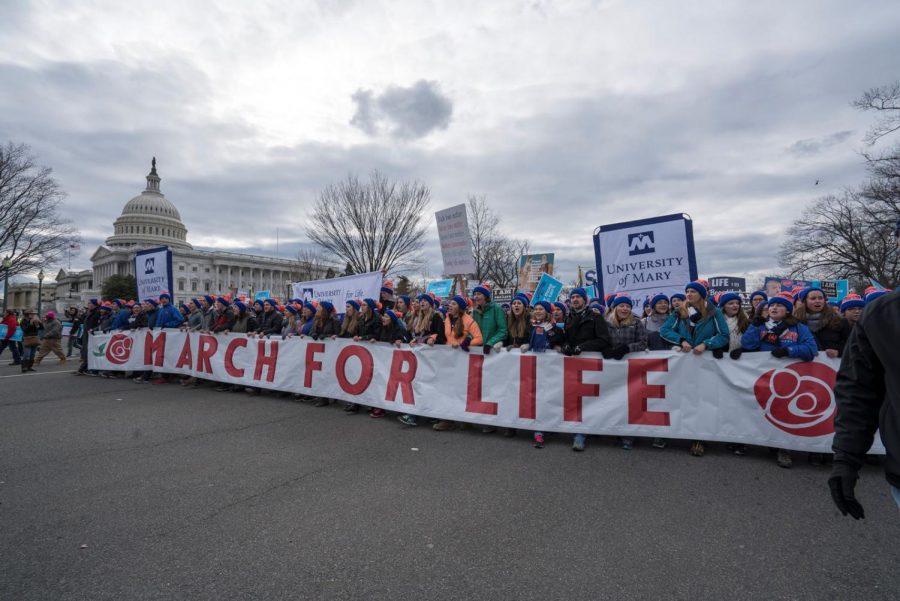 March for Life: Supporters of the Pro-Life movement gather to march in Washington D.C. There were nearly 100,000 demonstrators.

The annual pro-life march made its way through Topeka last Tuesday as over 2,000 proponents of the anti-abortion movement gathered there for prayer and to listen to several speakers who support the movement. The march traveled from TPAC to the capitol building’s north side where they continued inside to listen to the speakers who had come to support the movement. The march traveled through the streets despite freezing rain and winds that threatened the marcher’s safety as their route took them closer to the Capitol and through the downtown area. But despite such terrible conditions outside, the march wasn’t canceled and continued as planned.

The march began as supporters of the pro-life movement and students from Catholic schools around Topeka gathered at TPAC for mass before beginning their march. They marched through the freezing city streets to the Capitol building where, inside, booths had been set up displaying pro-life informational brochures and pictures of babies in the womb. The lower levels of the Capitol building were crowded and packed wall-to-wall with students wearing hoodies and coats displaying their school’s regalia on them. The student groups were also treated to guided tours through the Capitol, learning about the history of the building and Kansas before heading up to the main floor where the rally would conclude.

The main floor of the Capitol was crowded with a mostly adult audience that consisted of lawmakers, camera crews from local news stations and others who supported the movement. Several speakers took the podium, flanked by members of the Knights of Columbus, to give their speeches in support of ending the practice of dismemberment abortions in Kansas. Dan Hawkins, the Kansas House Majority Leader, spoke at length to the gathering about his position on abortion in Kansas.

“An abortion amendment to the Kansas Constitution is essential regardless of how the Supreme Court views a state law banning a common second trimester abortion procedure,” Hawkins said. “Kansas should vote to throttle the judicial impediment to restricting abortion because children are dying.”

Mary Kay Culp, the leader of Kansans for Life, spoke about the uphill battle that the Pro-Life movement would be facing in the coming years due to Governor Kelly’s administration.

“It won’t be good because we know from the past that she’s voted against Pro-Life legislature. She was one of the nine senators to vote against the heinous dismemberment ban so we can expect her to push the same plans again now that she is the Governor,” Culp said. “All Americans have a right to life, liberty, and the pursuit of happiness.”

The pro-life march in Kansas mirrors the main rally that happens every year that attracts tens of thousands of Americans to our nation’s capital in Washington D.C. To date, the topic of abortion rights remains one of the most heated arguments in America.