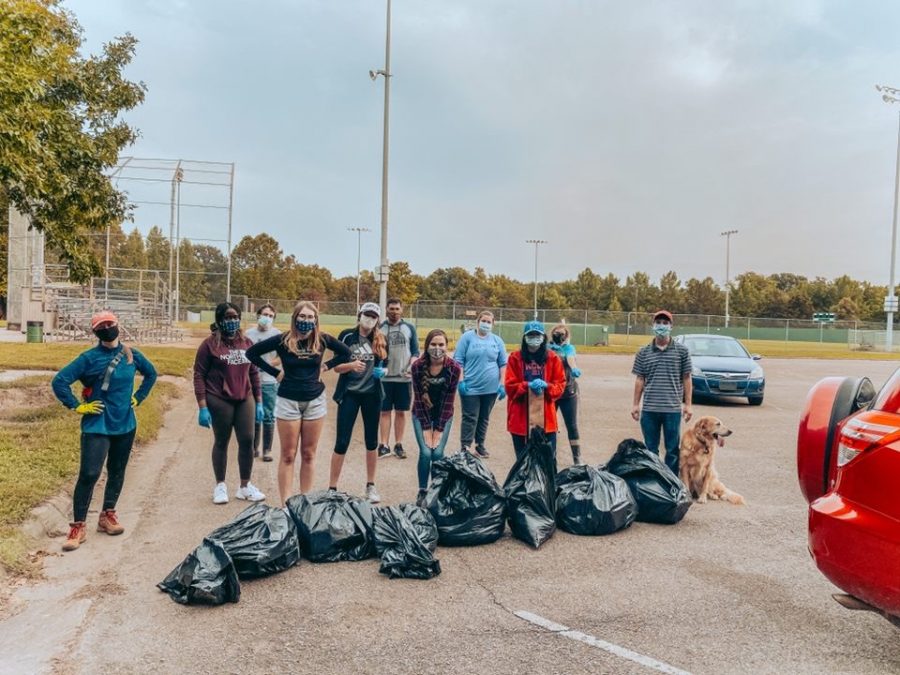 Cleanup bods: The Biology Bods worked hard to ensure a clean community. After a long day of picking up trash, the members of the Biology club were able to admire their hard work.

Many of the clubs and organizations on campus have overcome the struggles of this year, especially the biology club. Amidst a semester of social distancing and masks, the Washburn Biology Club was able to plan and host many activities throughout the semester.

With Dr. Benjamin Reed as the club’s advisor, Aubrey Gauntt as the president, Sam Wagner as the vice president, Kallie Rogers as the treasurer, Julia Eilert as the secretary and Abby Fette and Abby Watkins as the historians, the club had a successful semester in light of recent events.

At the beginning of the semester, the weather was warmer and club members decided it would be best to hold activities outdoors. These outdoor activities ranged from scientific discussions to trail clean-ups.

One of the events the club organized was radio telemetry at Karlyle Woods. They learned to locate turtles by using a signal and transmitter to ping their location. While they were there they also did a trail clean-up of the nearby forest.

The woods are especially important because it is owned by Washburn and dedicated for research purposes.

Karlyle Woods was their first of many clean-ups in the community. The club was also able to reduce litter at Shunga Creek and improve the appearance of this local attraction.

Before it got colder, members of the biology club had participated in a tulip planting project that was held as a local community service event.

The club’s most anticipated event was their raffle fundraiser. This raffle included merchandise from several local businesses and there were various baskets of prizes that could be won. This was the club’s second time running the fundraiser raffle.

The raffle was advertised on campus and social media alongside the biology club t-shirt fundraiser. Shirts came in several different colors and the design was made by members of the club.

Both of these fundraisers were deemed successful by the club overall.

Dr. Benjamin Reed stated, “The biology club provided a great avenue for students to continue to engage safely with one another during the pandemic in a non-academic focused way. The club provided opportunities for students to interact in-person or over Zoom about biology related topics and to network with another.”

Abby Fette, a historian of the biology club, said “Although this year was very unusual, we just tried to make the most out of what we could do!”

Dr. Reed also commented, “The club plans on returning safely in the spring and we will continue to meet in-person or over Zoom to plan, coordinate, and carry-out pandemic-safe activities such as hiking, trail maintenance, litter reduction, Zoo visitations, field demos, etc.

There is still more to come for the biology club and they are continuing to brainstorm for the future. For more information on the events or biology club, follow their Instagram!

“I hope any interested student (major or not) considers joining the biology club to meet an awesome group of highly motivated students interested in having fun while simultaneously building their resumes/CV’s,” said Dr. Reed.