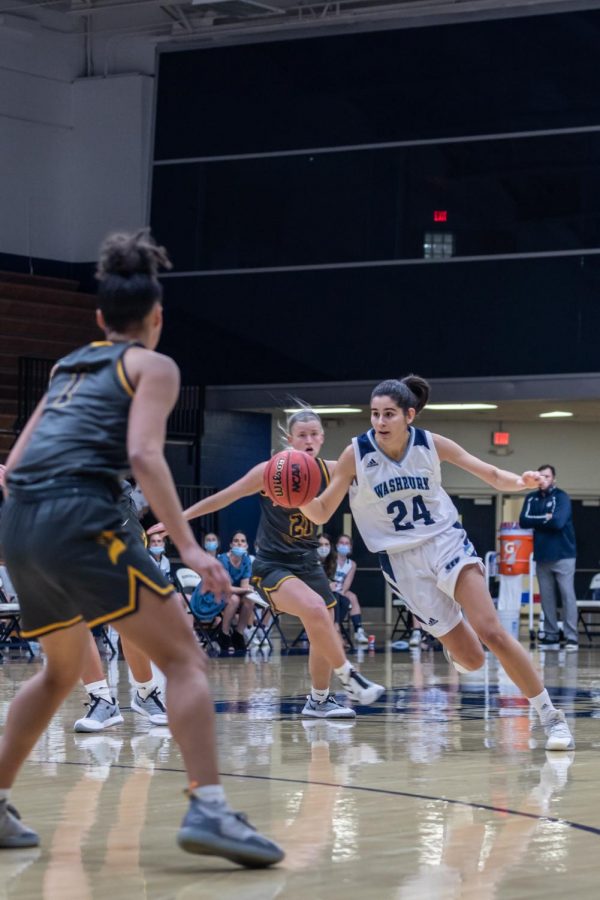 Can't stop this: Washburn’s junior guard Nuria Barrientos driving the ball to the basket. Barrientos had a total of 11 rebounds 2 steals and 1 assist in this week's game against Central Oklahoma.

After an unfortunate start to the season that resulted in a postponed game and two losses, the Washburn University Women’s basketball team looked to notch their first win of the season against the University of Central Oklahoma Bronchos. The game also serves as the home opener for the Ichabod’s and a tough one at that as Central Oklahoma entered the game with a perfect 2-0 record.

The game opened with each side trading blows from deep, and Washburn looking to push to pace whenever possible. The size of Central Oklahoma and the speed of Washburn battled back and forth and the score reflected it with a 20-20 tie at the end of the first quarter.

In the second quarter, the Bronchos went to their leading scorer on the season, Kelsey Johnson, who was hitting from inside and out leading all scorers with 19 at the half. Washburn’s swarming of the passing lanes led to some easy baskets to keep the game close though they still went into the half trailing 33-37.

The pace began to pick up in the third quarter and a variety of zones used by Central Oklahoma resulted in more passing and outside shooting from Washburn, as the Bronchos continued to go inside.

“I thought we really did a nice job sharing the ball. We got 18 assists which is good for us and I thought all of them were really ones that meant ‘I’m going to get this shot for you,’” said Head Coach Ron McHenry.

This strategy paid off as Washburn continued to cause turnovers and got hot from outside, taking a 50-49 lead after a Hannah Willey three with under three minutes to go in the quarter.
Washburn continued that scoring run for the remainder of the quarter led by guards Hunter Bentley and Nuria Barrientos who led Washburn with 14 each at the end of three. The late surge gave Washburn a 59-49 lead going into the fourth quarter.

“We started getting more stops like we were in the first quarter and then we were executing really well. We weren’t just running the plays, really just taking it into the basket and not just going into their defense,” said Bentley who finished the game with 19 points and 15 rebounds.

The final period began for both sides, with more outside shooting and a balanced scoring attack from Washburn as Central Oklahoma continued to go inside to Kelsey Johnson who ended with a game high 31 points. Offensive rebounding helped Washburn control the clock which proved helpful as late game turnovers allowed Central Oklahoma to make a late charge before ultimately falling 80-70.

Coach McHenry believed that getting the first win out of the way was important for the confidence of the team going forward after starting the season with two losses.

“It was good to get that, we needed it, because we had played well at stretches in both of our games,” said McHenry.

The Ichabod’s will look to even up their record when they face Newman University on Saturday, Dec. 5 in Lee Arena.

Edited by Matthew L. Self and Abbie Barth