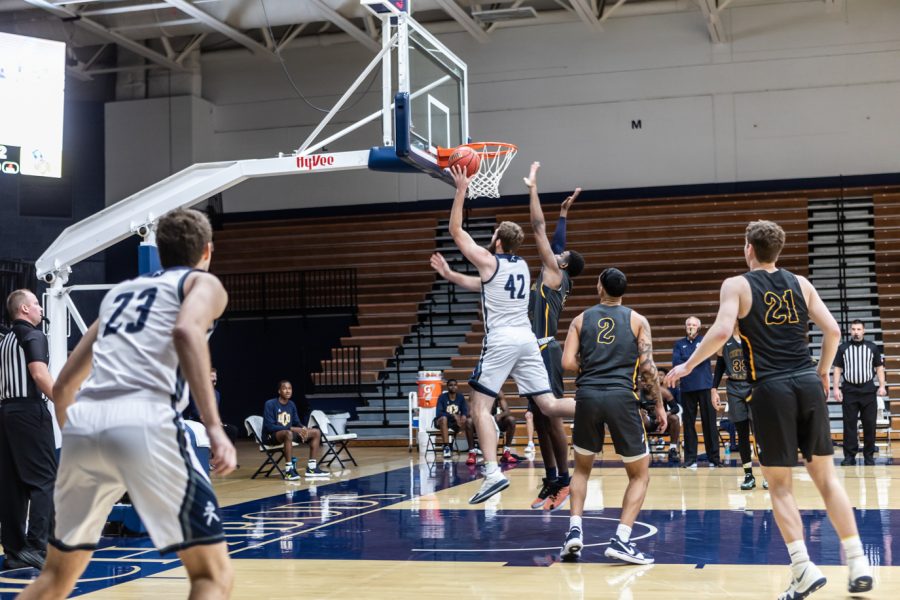 Getting fired up: Washburn’s Junior forward Jonny Clausing took it to the basket against Central Oklahoma. Clausing had a total of one block and two assists during Monday’s game.

Ichabods beat the Bronchos on Monday 81-71.

Following an amazing opening week of play, the Washburn University Men’s basketball team looked to keep their perfect record alive in their first home game of the season as they hosted the University of Central Oklahoma Bronchos.

At the opposite end of the spectrum, the Bronchos entered the game winless at 0-2 looking for a victory before heading back home.

Central Oklahoma took control at the start of the game thanks to strong inside play and using unique zones on defense as they led for the first 13:30 of the game. Washburn was able to battle back and take the lead following a 12-0 run thanks to a flurry of outside shooting by their guards. Washburn was able to hold onto that lead, going into halftime with a 37-34 lead.

The Bronchos responded by starting the second half on a 9-4 run as each side focused on getting the ball inside. Each side traded blows with the Ichabod’s gaining an edge close behind three straight three pointers from Tyler Nelson following the under twelve timeout. Those threes accounted for nine of the 23 points Nelson would finish with, on an uber-efficient 7-8 from deep.

Central Oklahoma was able to stay in the game thanks to a strong inside play from Isaiah Wade who finished the game with 18 points and 12 rebounds. Coach Brett Ballard knew that he would be a challenge to contain.

“We tried to take advantage when he was out, but I like the way we kept fighting and battling and obviously our guards took and made some big shots,” Ballard said.

Washburn was finally able to pull away in the final 90 seconds when Tyler Geiman was able to hit a deep three as the shot clock was winding down. The very next possession Geiman stole the ball and took it all the way to give him 18 points and two steals for the game and give Washburn a 76-65 lead with 1:17 to go.

Following some exchanging of free throws Washburn was able to hold on for an 81-71 win and advance to 3-0 on the season while dropping Central Oklahoma to 0-3.

Next up for the Ichabods, they will travel to Lawrence for an exhibition game with Kansas University. Junior forward Jonny Clausing played in the last game against Kansas in 2018 logging 15 minutes. His expectations for the team in the next game are to play hard, have fun, and get the most out of the experience.

Following that, the mens team’s next MIAA opponent will come on Dec. 5 when they host Newman University. That game will start at 3 p.m. in Lee Arena and the women’s team will host the University of Central Oklahoma on Dec. 3 at 6 p.m. in Lee Arena. You can watch those games on the MIAA website by clicking HERE. To get up to date scores you can go to the Scores and Schedules section of our website.