Topeka Symphony Orchestra performs ‘Who am I, and Where am I Going?’ 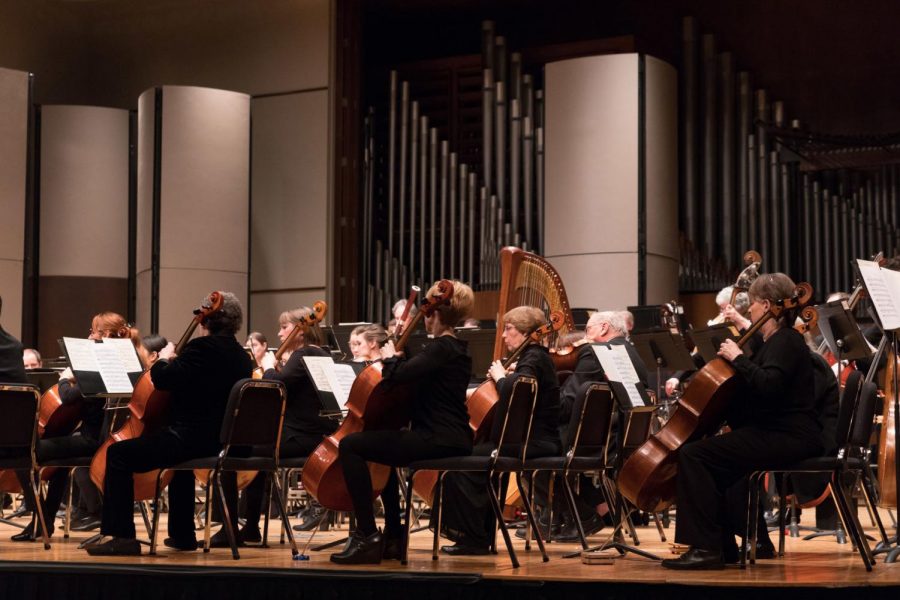 Responses via music: The Topeka Symphony Orchestra holds a series of concerts asking "The Big Questions." The concert “Who am I, and Where am I Going?” was Saturday, Jan. 19 at White Concert Hall.

The Topeka Symphony Orchestra presented “Who am I, and where am I going?” at 7:30 p.m. Jan. 19 at White Concert Hall in Washburn University.

In the concert, Topeka Symphony Orchestra posed giant philosophical questions, and artists and composers responded through classical and popular music. It explored big issues about life and death, fate and destiny, art and inspiration and love and marriage.

Jennifer Forni joined the Topeka Symphony Orchestra to perform in the concert about identity.

“For a small town to have a symphony orchestra [at] this quality is really good, really special,” said Washburn University President Jerry Farley. “I can’t sing like that at all. She has beautiful voice.”

The concert began with the prelude from the opera “Hansel and Gretel.” The tale showcased the concert’s questions, “Who am I, and where am I going?” After that, Forni joined the orchestra to perform “Knoxville: Summer of 1915” by Samuel Barber. It’s a reflective meditation on childhood, nostalgia and self-awareness. Finally, Forni performed the Fourth Symphony by Gustav Mahler after intermission. It mused on joy and innocence, and it explored deeper and darker sides about life and death.

Forni, a soprano, was a special guest at the concert. Forni received a Bachelor of Fine Arts in Music in Vocal Performance at the Oberlin Conservatory of Music with the Evelyn Puddy Oliver Scholarship. She continued her studies at the University of Maryland, College Park, where she received a masters of opera. During this time, she was personally selected by Marilyn Horne to represent the university in The Song Continues master class series at Carnegie Hall.

Forni is a former member of the Portland Opera Studio. In recent years, she has returned to Portland Opera for such roles such as Tatyana in their brand-new production of “Eugene Onegin.”

In this summer, Forni will return to Portland to sing the “Chants d’ Auvergne” in the Oregon Music Festival.

The Topeka Symphony is going to ask “The Big Questions” this year, including “Who am I?” “Where am I going?” “What happens after death?” “What is our destiny?” “What is the meaning of life?”

The concert conversation was at 6:30 p.m. Jan. 19 at Bradbury Thompson Alumni Center at Washburn University.

“I really enjoy the concert,” said Topeka resident Darlene Mahler. “I went to the pre-concert talk, and they talked a lot about the individual pieces and how to tie that to “Who am I, and where am I going?”

Kyle Wiley Pickett is the music director and conductor of “The Big Questions” series. Before the concert, Pickett spoke about the performance and the history behind the music.

The Topeka Symphony encourages and cultivates appreciation and support for fine music in north Kansas by presenting performances of high quality and by providing educational and performance opportunities for youth.

For more information about Topeka Symphony Orchestra, visit the website at topekasymphony.org.