The Sneegas family becomes Washburn’s 2020 family of the year 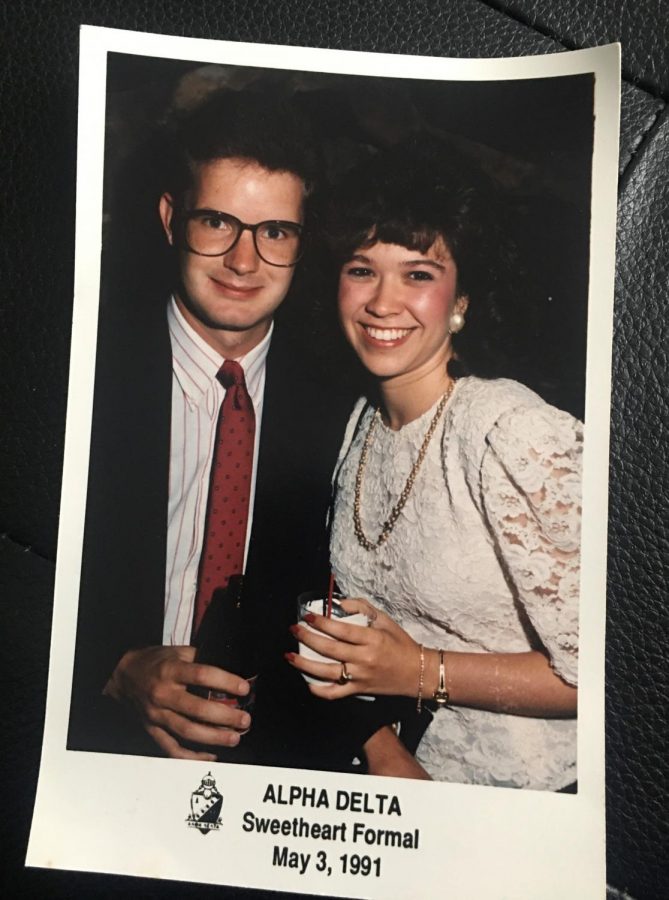 Throwback to 1991: This is a picture of Kristi and Brendan at an Alpha Delta formal. They certainly appear to be college sweethearts.

COVID-19 has taken away a lot from the Washburn community; football, volleyball, classes, but it can’t take away the Family of the Year.

The award is usually given out on Washburn University’s Family Day during the football game, but this year, they had to improvise. On September 26th at the Topeka Zoo & Conservation Center, the Sneegas Family, Washburn alumni Brenden and Kristi Sneegas with their daughter Kati who is a current Washburn student were awarded with the 2020 Family of the Year award.

Brendan and Kristi Sneegas were students in the early 90’s. They both were very involved on campus, Brendan was a trumpet player, a member of the fraternity Alpha Delta, the Delta Gamma’s house boy, a member of the Social Work Association, an elected officer for Student Government, worked in the Office of Student Affairs, as well as participated in intramurals while Kristi was a photographer for the Washburn Review and the Kaw Yearbook and was involved in study groups for nursing. Brendan graduated in May of 1992 and Kristi finished up in the winter of 1992.

“I swear I could not stop thinking about her smile,” explains Brendan Sneegas.

He flipped through the yearbooks trying to find her, but since she was a freshman, she wasn’t in them yet. Once he got back he discovered what dorm she lived in, asked her out, and the rest is history.

Brendan and Kristi said once they were done with Washburn, they would leave Topeka and not come back, that is until their daughter Kati had soccer tournaments in Topeka. They brought Kati to their alma mater.

“We drove back through the campus, and could not believe what had happened in 25-30 years later it was a completely different campus and Kati truly fell in love with it,” explained Brendan.

“When it was my turn to kind of choose where I wanted to end up for my education and for soccer, it was always in the back of my mind and then honestly everything just lined up,” Kati explained. “And it just felt like home.”

Kati is just as involved as her parents were, if not more. She is a senior at Washburn University majoring in Applied Studies in family and human services with a minor in Criminal Justice. She was a peer educator for three years, she is in the Criminal Justice Association and the co-president of the Student Athlete Advisory Committee, as well as a soccer player on the Washburn University Women’s Soccer team.

Once Brendan and Kristi started coming around for Kati’s athletic activities, they also fell back in love with Washburn University; Brendan explains that Kati led them back. They are members of the alumni association and really enjoy attending the alumni events in Kansas City.

“It’s fun to listen to their stories and get to know them,” said Kati.

Having jobs that require them to care for others is what both Brendan and Kristi may not bring in the biggest income, but it has the biggest effects on their hearts which is worth more than any amount. Since they both worked with patients, Brendan explained that sometimes he worked to see a patient in the morning that Kristi would take care of later that night. He enjoyed putting his daughter in this environment of helping others.

When they found out they were being named the 2020 Family of the Year, they were ecstatic. Kati said that she is more happy for her parents because, “they deserve every recognition they can get”.

Brendan explains that receiving this award is in a way an honor of how they live their lives; putting others before themselves and always doing something nice for someone else.

“Instead of income, you get something like this and you feel like you’re a millionaire,” says Brendan.

Brendan and Kristi will continue to stay close to the Washburn Community after Kati graduates by attending games here and there.

Kati “can’t imagine her life without Washburn” and will remain close after she graduates by attending soccer games and keeping in touch with Human Services staff.

Kati finishes off by saying that the award should really be called the Brendan and Kristi award.