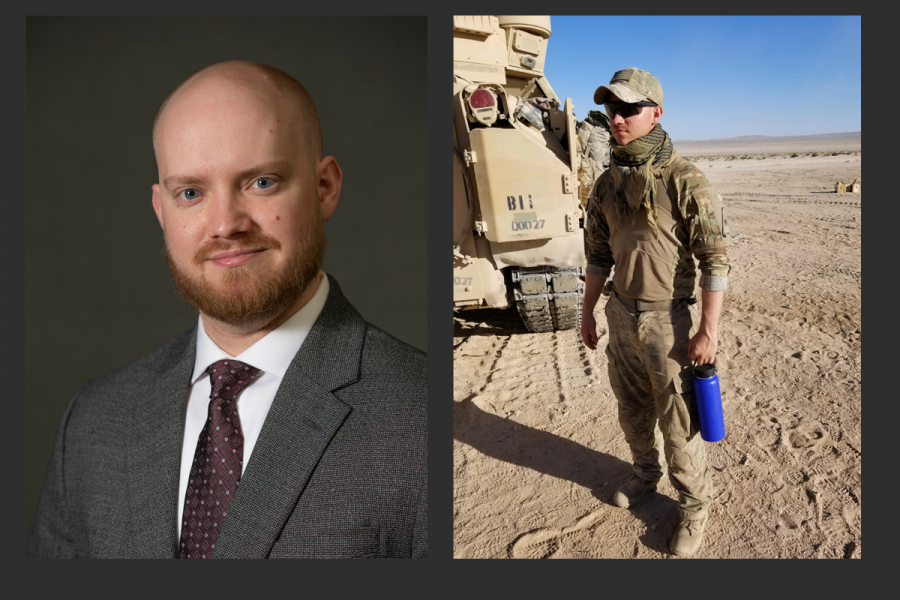 The photo on the right is Spencer Michell at Fort Irwin in California around 2018.

Sometimes students find themselves questioning where college might take them. After spending two years at Kansas State University, Spencer Mitchell was trying to figure out what his next move should be.

A calling to serve a greater purpose during his time away from college lead him to enlist in the United States Army.

The experience allowed Mitchell, a former Army sergeant, to traveled the world while serving from 2014 to 2019. He was based out of Fort Bliss, Texas, and worked hard to ensure that the soldiers under his leadership thrived in their environment.

After leaving the service, Mitchell decided to move back to Kansas and attend Washburn University for his undergraduate degree with hopes to continue his education through law school, and perhaps even practicing as an attorney for the United States Army.

“There are certain aspects of being in the Army that I really miss,” said Mitchell. “Becoming a JAG attorney is a viable option to continue to pursue my personal career goals while also giving me back some of those things that I miss. I wouldn’t say that it is my primary goal after law school, but it is an option.”

Mitchell worked hard during his military service to communicate and maintain his relationships with family and friends who were back home while he was away. He made lasting connections with many soldiers from his time serving alongside them.

“Spending every waking moment with them, such as exercising and sleeping 16 inches apart, allows you to get know them unlike in the civilian world where you don’t have that opportunity,” Mitchell said.

Mitchell honed his leadership skills during his service, first, as section leader and later as a squad leader. He helped his soldiers grow while keeping them in line. Often Mitchell compared his leadership style to being the older brother to his soldiers, praising them when they hit milestones and accomplishments and being stern when they made a mistake or broke the rules.

“I had to act like a dad or a strict big brother, although I was 25,” Mitchell said.

Mitchell was quick on his feet and able to handle the tasks he was given quickly and correctly as ordered to him by his higher-ups.

“He is a very intelligent person,” said Josh Ball, a fellow soldier. “And, he was intelligent on the job.”

When deployed to places like Ethiopia, Djibouti or South Korea, Mitchell always knew how to make the best of the situation even when he was lying on a cot five feet away from the next soldier. Those moments while deployed, Mitchell said, were the most enjoyable part for him while in the military.

Currently, Mitchell is a senior at Washburn University pursuing a degree in public administration with the hopes of attending Washburn Law School after graduation. He loves Topeka, Washburn, and still living somewhat close to home. He is originally from Wakefield, Kansas.

Being in the Army made it difficult for Mitchell to communicate with friends and family back home, so now that he is home, he’s able to work on those relationships and keep in close contact with them. His friends, Andrew Parker and Ball, who served with him, still talk to him almost daily.

Ball and Mitchell enjoy catching up on life and having a good laugh about how things used to be, and Parker calls Mitchell whenever he needs some advice. Parker said that Mitchell is always willing to listen to him.

As time has passed after the military, the transition to a civilian and a student has become easier for Mitchell. Originally, it was challenging as he was used to having such a strict schedule and way of life, but now he is learning to enjoy the time he has and live a regular civilian life. Overall, Mitchell is enjoying the life of a regular college student and is excited to see what his future holds.

Mitchell’s experience in the military had some great times but also posed some challenges for him, but he made the best of the situation and emerged with two promotions, which showed him that his hard work and dedication paid off. Mitchell’s time in the military allowed him to find his passion for his future career as a military attorney.