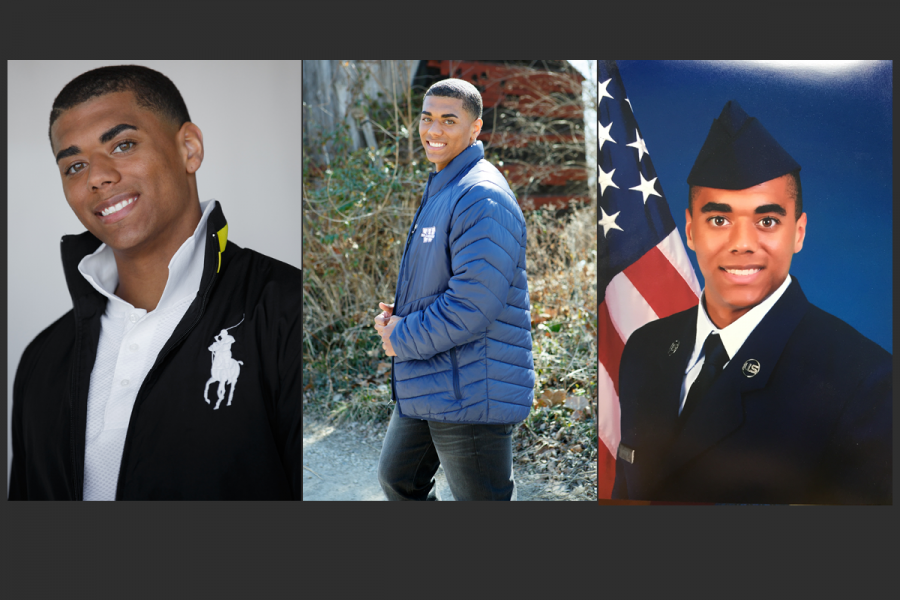 “When you press Ctrl+T on your keyboard, it opens a new tab or new page,” said Traevonne Greene. “This is my new page, a fresh start where I take control of my life, and where I chase my dreams.”

These words can be found on Greene’s social media platforms, including Instagram and YouTube, for his growing brand, Control T.

Control T is all about taking control in life and snatching every opportunity in front of you. As a member of the U.S. Air Force, actor, model, athlete and avid student, Greene has certainly lived up to his brand.

In 2015, Greene began at Northwest Kansas Technical College to study medical assisting and received an associate’s degree in Applied Science.

After a year of work, Greene traveled to Dallas, Texas, to attend Paul Quinn College. However, he still didn’t know exactly what goals he had in mind for the future and found himself turning to the Kansas Air National Guard in May of 2018.

“It paid to go to school, and also get skills in exchange for serving my country,” Greene said. “It’s a win-win, you can’t really lose. It’s not just a normal job. There’s something behind it, and everybody needs our help in different areas. It just feels more meaningful and impactful.”

Since starting in the Air National Guard and also attending Washburn University as a computer science major, Greene has been working hard to balance school, work, football and basketball with opportunities to move toward a career in acting or other media.

Though his schedule stays packed, Greene said that being in the military has helped him stay focused by providing many opportunities to refine his skills. Grants and funding for his service have also allowed him to continue pursuing a college education, which he said he would be unable to do debt free otherwise.

Greene enjoys attending Washburn in his hometown of Topeka, as it has allowed him to spend time with his mother and grandmother. He has also spent time getting to know his father and four siblings, who he met and began bonding with about two years ago. Though separated for a long time, they have been able to build strong relationships with each other, despite living in different states.

Lately, Greene has been active in his role as an airman with the 190th Air Refueling Wing under Health Services Administrator Ana Tavares.

“He’s definitely a hard worker,” Tavares said. “He never says no to any sort of task that we’ve ever assigned him. He’s always more than willing to tackle whatever, even if it means coming in super early in the morning to check temperatures at the gate. It’s definitely things that are outside of his wheelhouse, but I think that just goes to show the kind of person he is and the work ethic he has.”

Greene’s first, and most recent mission, provided assistance in the wake of the COVID-19 pandemic. The team traveled to nursing homes throughout the state of Kansas with N95 masks in tow and provided fittings for health care professionals and patients to ensure enough supplies were available and used efficiently to care for COVID-19 patients.

“When we did that, we really helped the community out, and it felt like we were doing a good service that was needed,” Greene said. “The nursing facilities were so grateful that we were in there doing that for them and the patients. Everybody loved seeing us. It meant a lot, and it felt good doing that.”

The mission he went on during the pandemic was Tavares’ third time serving Kansas during a natural disaster, and she said that Greene’s service is a great example for what it means to serve in the Air National Guard, especially here in Kansas.

“Traevonne is a good example of what it truly means to be a citizen airman,” Tavares said. “He’s a true testament of what it means to serve in the National Guard.”

Greene is also involved in the Veterans Day Committee, which had originally planned for a parade and event on campus prior to COVID-19. He also is a part of the Washburn University Student Veteran and Military Connected Organization on campus. Before the pandemic, Greene visited the room a lot to provide peer support and resources for veterans on campus.

“He knows how to pick people up when they’re feeling low,” said Sammy Aquino, one of Greene’s close friends. “He knows how to motivate somebody. He’s always there to listen to me and make sure that I’m on a straight line. He motivates me to be a better person.”

Today, Greene is focused on finding opportunities to build a career in acting, modeling or even professional sports. Although he is not quite sure where the future will lead, he is active on social media and on his YouTube channel as an advocate for taking control of life.

As an avid student and active member of the military, Washburn athletics and Washburn student organizations, Greene certainly lives up to his message. Every choice he has made in the last few years has been one step closer toward achieving what he really wants out of life. Soon, the Washburn community may be able to see Greene’s name on a bigger platform.

Shelby Hanson is a student in MM202 Creative Media Writing with Kristen Grimmer, assistant professor of mass media. This story was edited by Ellie Walker.