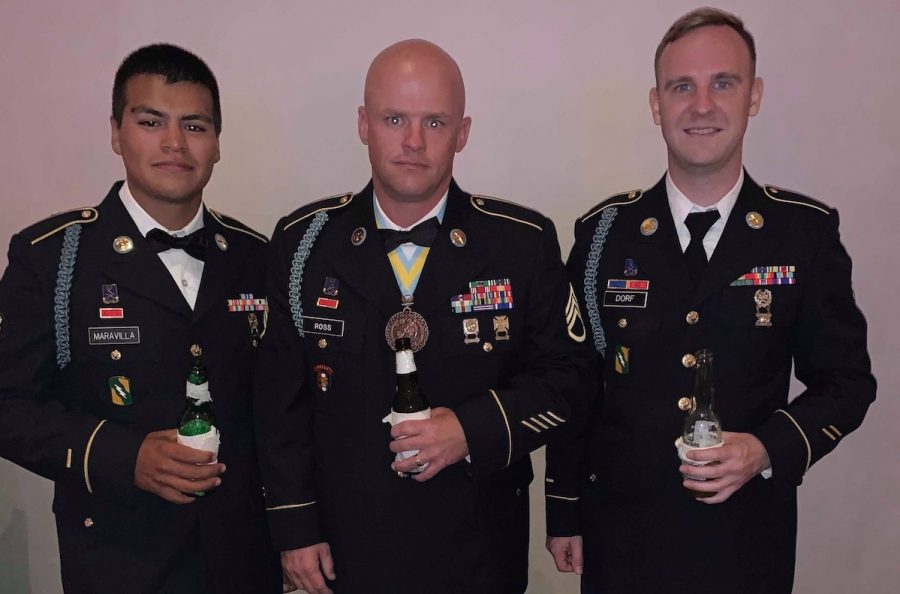 In July of 2019, this yellow ribbon is to celebrate the return of deployment and reflect on our experiences. From left: Ruben Maravilla, SSG Johnny Ross and SPC Trenton Dorf.

Ruben Maravilla is not ready to step away from the men and women who have become an important part of his life.

“I get excited for drill. Not for the work, but for the people and friends I see once a month,” said Maravilla, who says the experiences of living and eating together has formed a lasting bond. “This is a bond that is earned. Something only we understand. I’m not willing to give that up yet. In fact, I’m willing to go a few more years with few showers in between. Just to have something to talk about with those guys. The bond is stronger than blood. “

Maravilla shared that a highlight for him in boot camp was that he was able to get in shape because of all the physical training required.

“My least favorite part of boot camp was the 17 to 19-year-olds who were undisciplined and were not team players,” Maravilla said.

This type of attitude makes it harder for everyone else in boot camp because the point of it is to build team cohesion skills and self-discipline regarding the military.

Additionally, Maravilla said that he did split training, which is where he went to boot camp in his junior year of high school and then went back to school and completed his senior year. After graduating from Rolla Junior/ Senior High in Rolla, Kansas, he then went on to complete Advanced Individual Training, which is normally done concurrently following completion of basic training.

Maravilla said his advice for others is, “Don’t do split training, wait until you are 18 and out of high school to do all the training at once.”

Maravilla’s current job in the Kansas Army National Guard is infantry, and from 2018 to 2019 he was deployed to Kuwait.

While in Kuwait, Maravilla was deployed with Sergeant First Class Christopher Crotts and Staff Sergeant Johnny Ross, but they were attached to different units during the duration of their deployment. However, they both are currently stationed with him at his permanent duty station.

Maravilla also just signed a re-enlistment contract to do another six years in service.

“I feel like I haven’t done my job yet and have not served to the full extent,” Maravilla said.

Maravilla said that his reasons for joining the military are because he and his brother, Roy Guerrero, had a pact that they would join because they grew up watching “Brothers in Arms” and “The Patriot.”

However, the family was informed his brother had a medical condition that prevented him from being able to join the military. Maravilla decided to go because he still maintained interest, but also for his brother’s honor and to make him proud.

Afterward, Maravilla’s initial plan when joining the military was to join the infantry and be a military police officer.

“I also wanted to join the Air Force to become a pilot and fly Black Hawk helicopters because that has always been a dream of mine,” Maravilla said.

During Maravilla’s time serving, he has acquired and maintained leadership skills, according to non-commissioned officers he currently serves with.

Crotts, a non-commissioned officer who serves with Maravilla, reiterated his respect for the soldier.

“SPC Maravilla has been a very good soldier and shows extreme potential for further leadership positions, which we have recommended him for,” Crotts said.

“We [Crotts and Ross] have both put him in for an Army Achievement Medal because he went above and beyond the call of duty during the unit’s 2020 annual training,” Ross said.

Both Crotts and Ross feel that Maravilla’s career in the Army displays a high-level of promise.

“Maravilla is dependable, and in my 16 years of serving, he is one of the best soldiers I have had,” Crotts said. “He is what the Army needs, and I can say with confidence, that he will go far in his military career.”

Ross discussed Maravilla’s progression and promotional advancement, which is accompanied by more leadership responsibilities. He is currently waiting on a date to attend the Warrior Leader Course.

“SPC Maravilla has completed all prerequisites but has not attended WLC,” Ross said.

At 23 years old, while attending college, Maravilla has also maintained employment at Starbucks for the past three years in Topeka, Kansas.  He is currently finishing his last year of college pursuing his criminal justice degree.

“My goal after college is to apply to be a highway patrol officer because this is something that I have wanted to do in terms of using my degree,” Maravilla said.

“Both the military and police, in theory, are services to the people that we expect the best out of,” said Maravilla. “I want to do my part in serving my nation, both in the military and as a civilian.”

Maravilla plans to graduate in the spring of 2021 from Washburn University to begin his future endeavors.