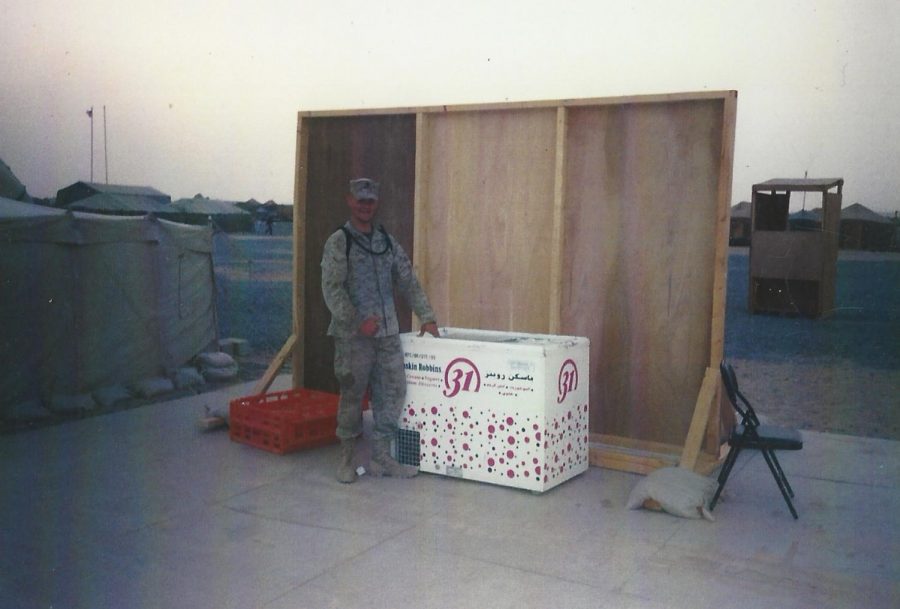 Thomas Davie, a 40-year-old resident of Topeka, has dedicated his life to helping others. After serving in the United States Marine Corps for five years, he values skills such as hard work and persistence. As a former Marine, his discipline provides stability for himself and his family.

Davie loves his children and education, and this is the driving force that pushes him to succeed. He has two sons, Tavaris Davie, 16 and Deidric Voigt, 21.

Davie served in the Marine Corps from 2000-2005. The idea of serving in the military was introduced to Davie uniquely, through cartoons. At a young age, he watched Bugs Bunny, which persuaded him to learn more about military life. This cartoon was relatively educational and inspiring as Davie knew the Marine Corps honor song, the “Marines’ Hymn,” even before he knew what a Marine was.

Davie chose the Marines, knowing it would challenge him mentally and physically; he wanted to rise to the occasion. Before Davie retired, he held the lance corporal rank. Davie learned the lance corporal requirements daily, applying technical training, while also developing leadership skills.

Davie’s experience serving in the military was truly unique as he formed the deepest and most genuine friendships with individuals who later became like family.

Davie met many people from all over the country, coming from all backgrounds and developed strong bonds with them and their extended families.

“If you don’t have a work ethic, you or someone else can get hurt,” Davie said.

Davie would go the extra mile to ensure his colleagues were safe, and he believes that a strong work ethic goes hand in hand with mental toughness.

In the military, it is crucial to exemplify mental toughness through discipline, patience, and sacrifice. Davie pushed through mental and physical fatigue daily. Mental toughness was crucial to his transition to military life because when he signed up for the military, he signed up to follow orders without question. It was pivotal for Davie to be mentally sound while not entirely having control himself.

While work ethic and mental toughness are crucial, the competitiveness within his “military fraternity” is what kept the comradery going. Because Davie served with 50-60 Marines, the environment was extremely competitive.

“You don’t want to be seen as a liability or seen as a weaker link, so you will do anything to be better than the next guy,” Davie said.

Self-growth occurred daily as Davie and his unit trained each other without knowing they were training each other.

Davie left military life after an injury on his second tour. His injury affected his hearing and night vision, which caused a liability to himself and everyone serving with him.

The transition from combat to civilian life was extremely challenging for Davie. In the military, Davie’s life was fast-paced as he was always on the go. Civilian life became hard to relate to because of how serious military life is.

Davie said that trauma and PTSD “sticks with you for life.”

Davie said he believes the importance of therapy as physiological health is just as important as physical health. He has found his coping mechanism in his love for baking. Because baking takes precision, it forces him to take a breath and slow down.

“No matter how fast you go, the cake still has to bake for 40 minutes,” Davie said.

Davie continues to use work ethic, mental toughness, and competitiveness in his daily life.  He is a full-time student at Washburn University, while simultaneously taking care of his kids and working as a personal care assistant.

“I choose Health Service Administration because I want to help other veterans on their path to recovery,” said Davie. “I understand how difficult the transition back to civilian life can be, and I want to assist them on their paths.”

“Thomas strives to never turn in anything late and always works to the best of his ability,” said Chris Bowers, Washburn’s military transition coordinator.

Davie loves his job as a personal care assistant, as he takes pride in making a difference in his clients’ everyday lives.

“Thomas is very busy with home life and school but is still heavily focused on his academics and has a model work ethic,” Murphy said.

While serving in the military comes with an abundance of challenges, Davie has become a better, stronger man because of it. He said he uses his work ethic, mental toughness and competitiveness to be the best dad and student possible.

Hannah Willey is a student in MM202 Creative Media Writing with Kristen Grimmer, assistant professor of mass media. This story was edited by Sarah Buchanan and Savannah Workman.