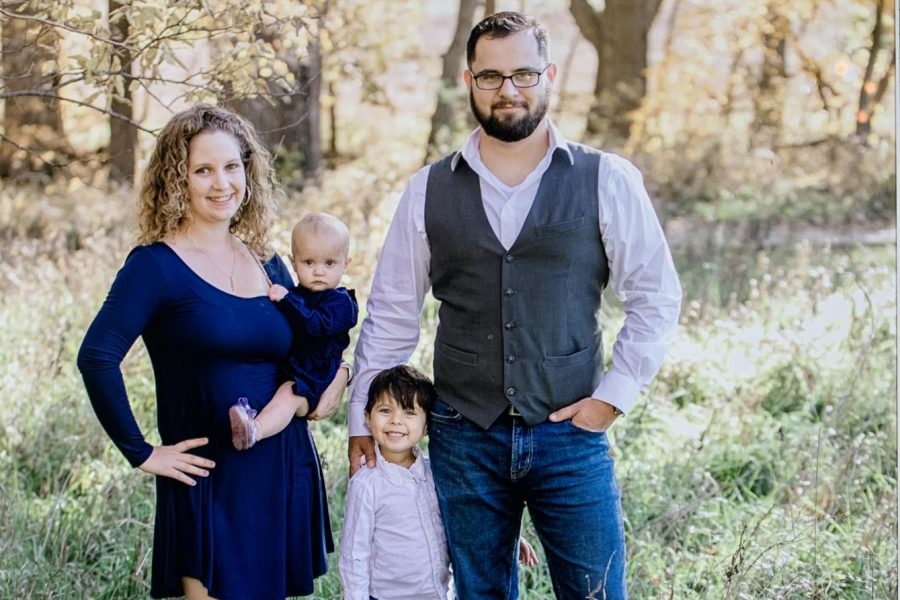 This photo of the Kelly family was taken in 2018. Bradley and Helen Kelly have two children, Jake, 5, and Avery, 2

Soldier uses military past to build future of service

He goes to class, works, and spends his days with his wife of 7 years, Helen, their two children, Jake, 5, and Avery, 2, and dog, Tita.

Kelly is typical to every other student on campus with one major exception, Kelly spent a majority of his adulthood serving in the United States Army.

Serving as an active member in the Army has shaped Kelly into the person he is today. He found his love for travel and experiencing new cultures, developed an incredible work ethic, learned to be a leader and established his passion for social work during his service.

The Army enhanced all of these aspects of his life and gave him opportunities that he never even imagined when joining straight out of high school in 2008. Kelly served for 10 years before he was released on a medical discharge.

Kelly said that his choice to join the military wasn’t really a hard one.

“I was past the point of writing letters to universities, and I took the ASVAB [Armed Services Vocational Aptitude Battery] test, so I thought why not?” Kelly said.

Kelly said that he had found his love of experiencing new cultures through his time as an active service member. Traveling the world and viewing different landmarks and sights was a large perk for him, but his favorite part of the military was experiencing the different ways of life all around the world in places where he also got to assist soldiers with their careers and personal lives.

Although there are plenty of perks for joining the military, it can be a complete culture shock because of all the different changes. Kelly said that he knew nothing about the military, like the verbiages, ranks, etc., before he went in to serve.

Kelly believes that the military is like a family in a way because of the time commitment and energy being put into each branch of service. Kelly gained many relationships because he had to change duties so often, which led him to meet many different people throughout his time in action. Kelly also said that there are also relationships among smaller entities where soldiers must build bridges to accomplish more within the branch.

The military matured Kelly and gave him the professional skills to help him accomplish his tasks. Due to his particular duties, he said he is more understanding of logistics, operations and working as a team. He gained interpersonal skills because he developed relationships with other soldiers and learned to take a more objective point of view when looking at situations.

Currently, Kelly is a full-time student at Washburn, where he studies social work, and he said he believes his success in school is tied to the military instilling in him a strict work ethic.

One of Kelly’s professors, Scott Sainato, assistant professor of social work, enjoyed having Kelly in his class and getting to know him.

“Mr. Kelly exemplifies what it means to be a social worker,” Sainato said. “His commitment to his education, his classmates and his professionalism goes unmatched. During his time here at Washburn as a social work major, he has taken on leadership roles within the Social Work student group and been a source of support and encouragement for his classmates. His professionalism and ethics are highly regarded by social work faculty.”

Beth O’Neill, another one of Kelly’s social work professors, also believes that Kelly is a credit to the department.

“Kelly’s care and concern for humanity is also apparent, and I know that he is going to be an excellent social worker, upholding the values and ethics that we hold true in the profession,” O’Neill said. “His professionalism, life experience and thoughtfulness make him an asset in the classroom and to the community he lives and works in.”

Kelly worked hard for 10 years while in the military, and he said he believes his life shows that anything is possible and that there is no age limit to attend a university and earn a bachelor’s degree. Throughout his journey, the military helped him through his process every step of the way.

Katie Hampton is a student in MM202 Creative Media Writing with Kristen Grimmer, assistant professor of mass media. This story was edited by Kyle Manthe.