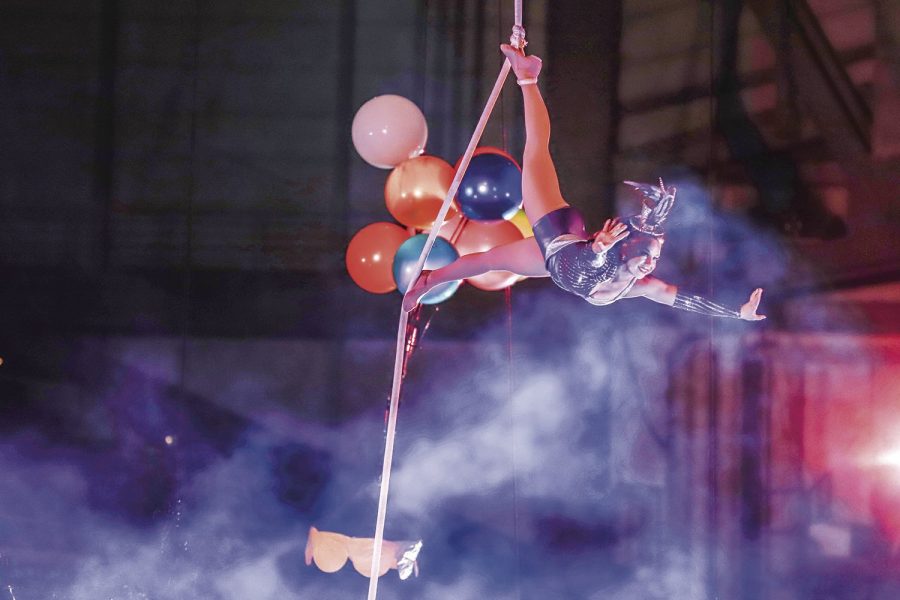 Flying high: The flying Cortes have been entertaining circus audience for generations . They performed high flying acrobatics at the Arab Shrine Circus.

The weather during the performances was cold and snowy, but the Expocentre was warm and many people endured the weather to enjoy the hot acts.

The circus featured six exciting performances, including The Flying Cortes’, The FMX Motorcycle Jumpers, an elephant show, juggling acts, tigers and a lion show along with twists and rings performances.

The event was family friendly and it offered many activities such as elephant rides, face painting, a toy booth and autographs from the performers.

Janiene Harris went to the circus on Friday night with her family.

“It’s a lot of fun and we are excited to be here,” said Harris. “This is the first time my kids [have] come to the circus. They are loving it.”

Jeff Zeiler is the director of the circus. He was the assistant director for the past seven years.

“It will be at least approximately 1000 people there tonight,” said Zeiler. “I hope tomorrow will be better.”

Gretchen Giffin attended the circus with her family. Her son had a poster of Johnny Rocket in hand with autographs. They just met Rocket and took photos with him after waiting in a long line at the intermission.

“It’s wonderful. It’s a great experience for our kids, for sure,” said Giffin. “I like Johnny Rocket because I saw him eating a hot dog with the dog eating it. He’s a good entertainer.”

Johnny Rocket was one of the crowds favorites and at one point he performed with a dog. He was having a picnic, and a dog was hiding in a box. When he put a hot dog on a plate and put it on the floor, the dog came out to eat it. The dog ate many hot dogs and Rocket didn’t even notice there was a dog, so he changed several places to have his meal. His act brought much joy to the audience.

Zeiler started to set the stage for the circus about a week ahead. He prepared the toy booth and the band to make sure people would have a good time there.

“It’s different [Being the director of the circus]. It’s challenging,” said Zeiler. “It’s on your shoulder to make sure things get done.”

The Arab Shrine Circus donated tickets to the community before the show to help children in the community who might not be able to afford to attend.

For more information of the Arab Shrine Circus, go to http://arabshrinecircus.com/index.html.