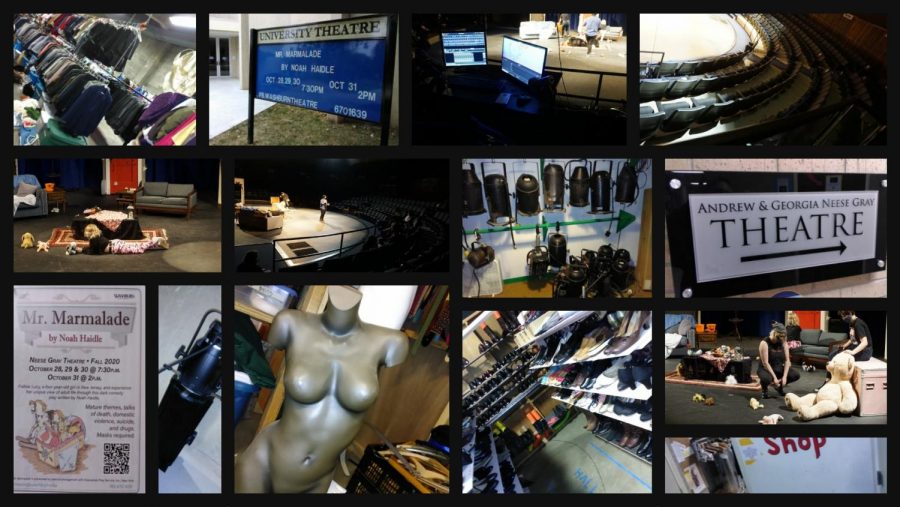 The Theatre: Mr Marmalade is in the house. It took a lot of work from various areas of expertise to make it happen.

Oct. 28 is the premiere of Mr. Marmalade, written by Noah Haidle, a graduate of Princeton University and The Juilliard School. It first appeared in California in 2004 as a dark comedy. Very dark, some might say. While researching the script, I was surprised to read so much controversy over it. It was judged by many critics as an appaling mix of shocking topics, as if they had never been exposed to any domestic violence, death, drug abuse, or suicide in their lifetime.
Mr. Marmalade is an interesting story about four-year-old Lucy, who gets pretty lonely and upset after being neglected by everyone around her. Even her imaginary friends are unreliable and abusive. The play challenges the imagination by featuring adults who are cast as children. These children take on the roles of the parents.
It has been called a creative and dark picture of single-parent families in crisis. I say it displays pretty common parts of life that most people know about. It is disturbing to imagine a four or five-year-old boy slitting his wrists to commit suicide. I’ll admit that. It doesn’t happen in the play, but one of the young characters, Larry, reveals that as being true of the details of his life.
It is a challenge for actors to play children characters who use dialogue full of mature subject matter. It is also difficult to portray invisible characters in a convincing way. To prepare for and perform in a play during the current restrictions on physical contact has been one more challenge to face.
I talked with the director of the current Washburn production, scholarship recipient Bella Martinez-Haskins. She is an enthusiastic senior who seems fearless in the face of difficulty. I watched as she directed the crew in rehearsal. They were in good spirits and confident leading into a week of public performances. I asked Martinez-Haskins about these difficulties.
“I’ve been fortunate enough to get a really great cast and great tech people to work with. They’ve made it really easy,” she said.
She stated that the actors do a great job handling the tough topics. They perform some of the more difficult scenes in a comedic way, while respectively adhering to the script. She expects their performance to elicit deep emotional connections with the audience.
In scene two, four-year-old Lucy pretends to be on the phone with Mr. Marmalade while her babysitter Emily watches TV. Lucy tells him that her babysitter has a boyfriend. She pauses to ask Emily if she has had sex with him yet. Not waiting for an answer, she says into the phone, “She’s totally avoiding the question. Yeah, I bet she has too. She doesn’t look like a virgin.”
Soon after, Lucy discovers that one of her imaginary friends, in a fit of anger, has given the other a black eye. She wants to protect the victim, and tells him there is no excuse for such behavior, and threatens to call the police if she sees it happen again. Adults can learn things from any character here, no matter their age.
In scene three, one character does drugs and offers some to Lucy. She refuses to play with him because he is drunk and high. He gets mad and gets up to leave as his briefcase spills out at least three things a little girl should never see. He tries to apologize as Lucy tells him she doesn’t want to see him anymore. She states that she doesn’t care about what fell from the briefcase. She says it’s because he neglects her…and is violent. “I deserve better than you,” she says.
If the audience can see past a distracting first layer, they will see the importance of the message. In this day and age, we are probably desensitized enough from the things we see, that it shouldn’t be a problem. Anyone with an open mind and a heart for learning will get the message. The message is: anything you can draw from it that can affect your life in a positive way. Martinez-Haskins believes people will connect with parts of the story in various ways.
“We are doing a really good job of bringing out the topics in a relatable way…with issues that, for some people who have experienced it, could be traumatic or triggering,” she said.
There may be some who have a hard time watching, especially if they are in a current abusive relationship.
“There’s a whole scene with a big fight where it definitely is a lot,” said Martinez-Haskins.
She told me that she is 100% certain the shows will be great, even though they only have had one month to prepare.
There is a new lighting designer in the theatre department named Sam Meyer. She is a graduate of Lansing High School and has had experience running lights there. She has already used her skills to solve a problem by repositioning some instruments. The theatre has new software installed. They periodically update the setup to make things technically relevant. Communication between director and lighting designer has been fluent, which is not always the case in the business. Effective communication between them is essential to produce an accurate representation of a play’s theme.
Mr. Marmalade will be shown at the Neese Gray Theatre Oct. 28, 29 and 30 at 7:30 p.m. and Oct. 31 at 2 p.m. It will be performed live for a capacity of 42 and can be watched elsewhere in streaming video format. Either way, you need a ticket that can be obtained here.
Please follow the rule of safe six. Masks are mandatory.
More information: (785) 608 – 2787

Edited by: Matthew L. Self and Leah Jamison