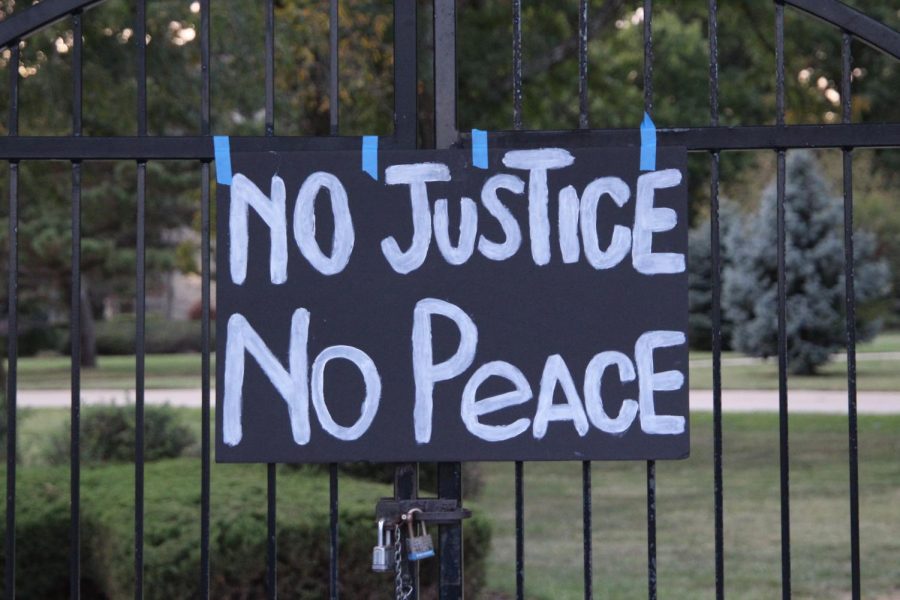 Truth: This is a slogan of the Black Lives Matter movement. It means that there cannot be any justice without any peace and vice versa.

Her voice rang across the football field and reverberated into the crowd sitting in the stands. Some participants mouthed the words with her, while many put their hands over their heart.

At 6 p.m. Oct. 2, roughly 150 people attended this event according to registration data. The max capacity for the rally was capped at 500 people, according to Eric Grospitch, vice president of Student Life. Washburn Student Government Association had planned the rally for August, but rescheduled due to COVID-19 concerns.

According to Smith, who is also the WSGA president, WSGA pledges its official support to underrepresented groups on campus, while also advocating for the BLM movement in Topeka.

“I am so proud to say that WSGA will not tolerate any racism or white supremacy,” said Smith. “We will support ‘Black Lives Matter.’ We will lift the voices of our black friends and not cover them.”

Cedrick Henderson-Smith, a recent graduate in criminal justice, spoke first into the crowd of supporters by sharing his experience. He plans to join the Topeka Police Academy on Oct. 19.

Senior Ayawna Singleton, member of Alpha Kappa Alpha Inc., was the next speaker following Henderson-Smith. Singleton explained what it feels like to be a Black woman on campus.

“As a Black woman on this campus, I feel like I am often seen as just Black,” said Singleton. “I can’t take my Blackness off. I feel like I can’t breathe. I’m expected to fight for change in every space I walk into. You feel like you can’t change the world, but you can change your world.”

“The underrepresented students here at Washburn felt like they needed their voices to be heard,” said Collier. “In holding this rally, their hope was to bring light to the injustices that are occurring in our world today.”

PJay Carter, director of the Black Lives Matter chapter in Topeka, Kansas, spoke at the rally in support of Washburn students. Carter called for change and stated that the outcome is determined by who people choose to vote for and policies that support minorities.

“It’s a beautiful thing for folks to show up, say ‘Black lives matter’ and share posts,” said Carter. “But the real work is going to be done with the power of this vote. We need to help others, lift each other up.”

At one point during the rally, students heard a statement from Topeka mayor, Michelle de la Isla, via a recorded statement.
“Since we started having these conversations, in the wake of George Floyd’s death,” said de la Isla, “we all started talking about how important it is that we have meaningful conversations about the reality that we are seeing online and across our country.”

Henderson-Smith was at first, nervous to speak in front of Washburn students, but later reflected on the event as a whole.

“I feel like [the WSGA] did the best that they could with the circumstances they had,” said Henderson-Smith. “I felt like it could have been better. I know a lot of people were discouraged that we were not going to have it [the rally] at all.”
Henderson-Smith thought it was a positive experience overall by speaking as a supporter of underrepresented groups that make up Washburn’s population. Those who attended this event, all shared a moment of silence for the lives lost.
To watch this event live, click here.