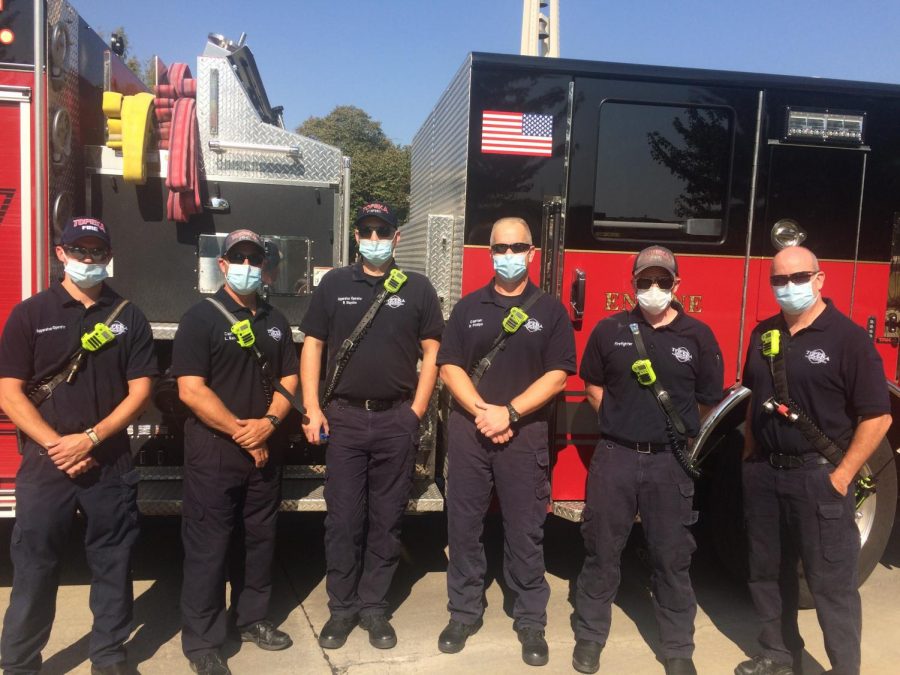 Firefighting professionals: Veterans of the TFD pose in front of one of their trucks. These are the men who have come running whenever there was an emergency on campus.

The Topeka Fire Department, in association with numerous Washburn organizations, held a fire prevention and recruitment effort from 11:00 a.m. to 1:00 p.m.on Oct. 7 in front of Yager Stadium.

The event was centered on raising awareness for fire safety in dorm rooms and apartment complexes. The TFD sent two fire crews along with other emergency personnel to inform students about both fire safety and opportunities to join their ranks.

“It’s a great career. You get to go out in the community,” said Driver/Operator Blake Singleton. “There’s always something different and there’s never a dull moment with this job.”

Fire safety is a key issue for Washburn University as the TFD is often called to campus in response to smoke alarms from kitchen fires. There have been a few non-emergencies such as steamy showers.

Complacency was something mentioned more than once to students who showed up for the event. They warned attendees of the dangers they are often faced with. The fires are not as dangerous as the smoke, according to firefighter Richard Moran.

“Don’t be complacent when a fire alarm goes off thinking nothing’s wrong,” said Moran. “We’ve had a fire in the past at the Living Learning Center, several years ago, when the elevator was on fire and kids were still just sleeping away. It’s not the fire that’s gonna hurt them, it’s the smoke.”

The lesson did not end there, as Singleton backed up Moran’s points.

“Try not to be complacent when the smoke alarms go off, even if it becomes habitual, because that one time could be the time when it’s an actual emergency,” said Singleton.

More information on fire safety policies at Washburn can be found here: https://washburn.edu/student-life/health-safety/safety-planning/fire-and-life-safety-guidlines.html

In addition to warning college students of the dangers posed by fires and the smoke emitted by them, they also helped students become more familiar with how to fight a fire in a dorm room. Public Education Officer Alan Stahl was on hand to show students how to fight a stove fire with a fire extinguisher. They used a model of a kitchen in a trailer.

Bods grabbed food and drinks after the demonstration, snapped a selfie with the TFD mascot, and listened to some classic country and rock music from The Sprinkler Brothers. A booth was present for students to sign up to vote.

The firefighters shared what made their job so unique and exciting. According to Captain Lance Bailey, the job provides endless opportunities to connect with the community.

“I still remember the first day when I became a fireman in Manhattan, and I still have that feeling of enjoyment,” said Bailey. “There’s always something different when you’re helping people.”

Students interested in becoming a firefighter can book a ride-along with the TFD and find more information on the career here: https://www.topeka.org/tfd/