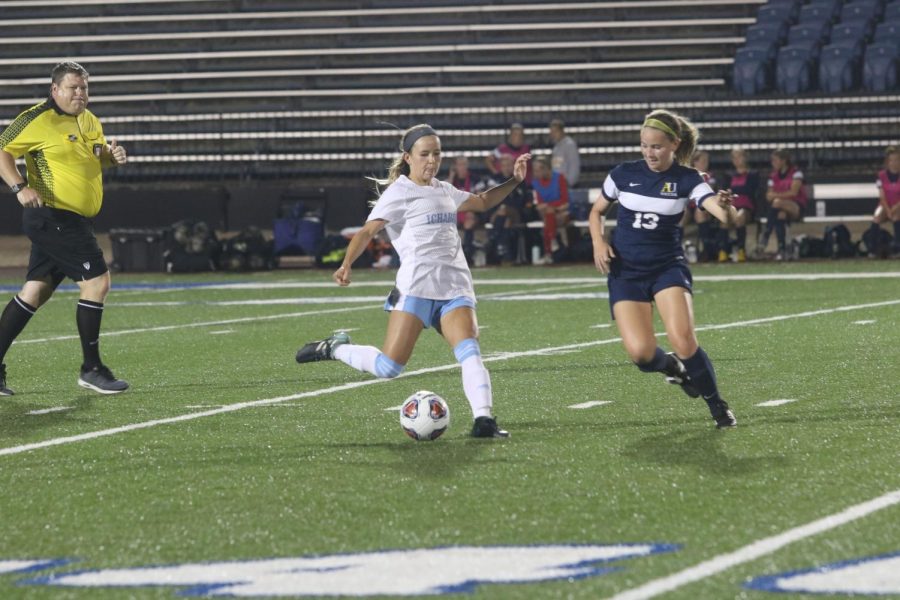 How often do we find something so interesting that we continue doing it for almost two decades? Tera Lynch, midfielder on Washburn’s women’s soccer team, found her interest in soccer when she was three and has been playing ever since.

“God it’s been 18 years,” said Tera Lynch. “I did whatever my older brother did. He was five, I was three, and as I grew up, I started liking it even more.”

Lynch’s brother Blake is now a place kicker for the K-State football team.
This is Lynch’s fourth year at Washburn. She is happy to have contributed to the team thus far.

“Every year we have gotten better,” said Lynch. “Sometimes records get better, sometimes they don’t, but we always keep trying.”

Lynch is a senior majoring in psychology. She said that managing sports and studies has not been too difficult for her.

“The professors here at Washburn are really supportive,” said Lynch. “Whenever we are away for a game and cannot take an exam on time, they are helpful and understand that we are student athletes and have responsibilities.”

While getting academic support from many professors at Washburn, her mother also shows her support and pride for her daughter’s accomplishments.

“She used to cut whichever poster I was in, and save it. She had a room full of those,” said Lynch.

“That’s the highest you can reach. Last summer when they won the World Cup, I felt very proud and sort of inspired,” Lynch said.

Coach Phillips has been the head coach of the women’s soccer team since 2017, the same year Lynch joined the team.

“He reminds me of my high school coach,” Lynch said. “The relationship he has built with all the players, on and off the field, I think is really important.”

“She is a fantastic player; she has always been. One of the greatest improvements she has made over the years though, is her leadership ability. She’s got to continue being the leader for the team,” said Phillips about Lynch.

While Philips says that she has a little sarcastic, humorous personality, she is also very capable of holding serious conversations, as well.

“I think when she scored two goals against Central Oklahoma, there was a turning point in her career. It gave her the confidence to take the challenge and express her skills,” Phillips added.

Lynch’s teammates praised her character on and off the field and mentioned how important she is to the team.

“Tera is a key component to our team, not only from an athletic standpoint, but also with the energy and enthusiasm she brings to anything we do. She’s an amazing teammate and even in crazy times like these, she’s always finding ways to gets us all together and bonding as a team,” said Jenna Shortridge, a defender on the women’s soccer team.

Another defender, Kati Sneegas, says that Lynch had a similar impact on her.

“She continuously pushes me and the team to be better and work harder. Washburn is lucky to have her,” she said.

While talking about the changes caused by the recent coronavirus pandemic in her life, Lynch mentioned that it had a dual effect on her.

“We student athletes are used to being busy. So, changing my routine has been a little difficult. But at the same time, it has given us time to spend on ourselves and has been better on our bodies,” said Lynch.

As Tera is approaching her final year with the Ichabods, she is hopeful to continue her athletics after her college career. Having played soccer for so long and gaining plenty of experience, Tera absolutely loves the sport.

“I will have to find things to keep the competitive spirit alive,” she said. “I cannot imagine not having sports as a part of my life.”
Edited by Joelle Conway, Abbie Barth