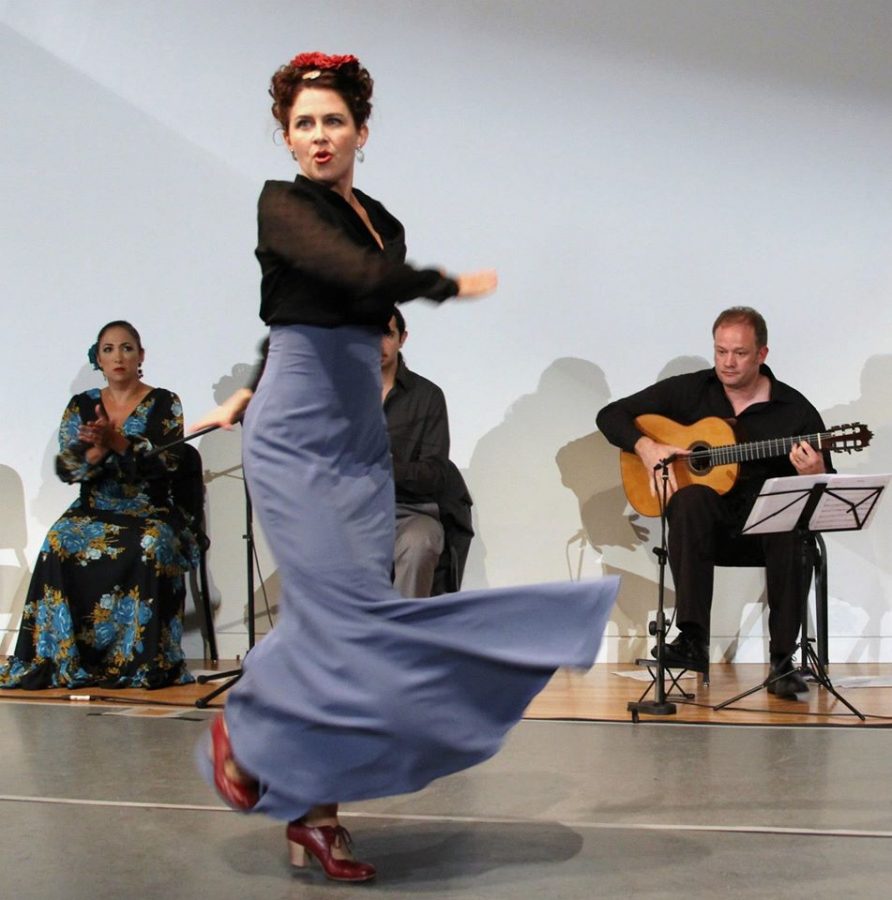 Swirling and Spinning: Melinda Hedgecorth performs a traditional Flamenco dance. Other members of the band play accompanying music or sing, adding to the spectacle.

Washburn University has the pleasure of welcoming our special guest “Siento y vivo Flamenco ” October 2 at 5:30 PM. The music and dance group will be hosting a live show on our practice football fields behind the Henderson Learning Center and the Mabee Library. This outdoor performance is open to all Washburn students as long as they bring their school ID and maintain proper social distancing protocols.

“This is the first time we have hosted this event at Washburn,” said Tina Williams, Study Abroad Program Coordinator. “The idea came to me over the summer. I thought, ‘it’s going to be a long time before I can send Washburn students out into the world. Perhaps, I should try to bring the culture to our campus.’”

Siento y vivo Flamenco, which stands for “I live and I feel Flamenco”, is a group specializing in the unique combination of song, dance and instrumental guitar music known as “Flamenco”. A fast tempo accompanied by vivid dance moves and rich vocals, are signatures of the style. Each performance differs from the next. Variety is a large part of what defines this form.

Flamenco originated in Andalusia, a large autonomous region of hills, rivers and farmland bordering Spain’s southern coast. A group of gypsies migrated from Rajasthan in northwestern India between the 9th and 14th centuries bringing tambourines, bells, and wooden castanets, the sound known today as Flamenco. After several centuries, people of different cultures had traveled to Spain and added their own flavor to the music.

Flamenco has made its way around the world being performed in groups such as Siento y vivo Flamenco, who are based in Kansas City. The organization is headed by Melinda Hedgecorth who will be bringing the band to Washburn University next month to give the campus a taste of Spanish culture.

Hedgecorth’s experience with Flamenco dancing goes back to her days as a dance major at the University of Missouri-Kansas City. She transitioned from being a child who was learning ballet to an adult who was open to learning more exotic forms of dance and performance.

“It’s so complex and stimulating, in so many ways,” said Hedgecorth. “It’s another world that you can disappear into. When I first started, I had no idea how deep the well was, that there were so many elements attached to it.”

After experiencing Flamenco firsthand in its original country of Spain, Hedgecorth felt a sudden urge to know more about this new style. She was exposed to more varieties after she moved to Seattle, enrolled in classes, and engaged in deeper study.

“In the early 2000s, I went to Spain for my first time,” said Hedgecorth. “I would stay between 1 and 3 months every year in Spain, and soon, I stopped taking classes in Seattle. I would study… when I wasn’t in Spain. I later got the opportunity to get a work visa, and I ended up staying 14 years. I just recently moved back to Kansas City two years ago.”

Since returning to the states, Hedgecorth has joined multiple Flamenco-based groups, who have their own styles. They often swap members with one another to increase the variety and sound of each. The group that will be coming to Washburn consists of guitarist Beau Bledsoe, violinist Coleen Dieker, guitarist Michael McClintock also on palmas, and Hedgecorth as the dancer.

“Flamenco is: being vulnerable, and completely taking in the music provided to you… internalizing it, and letting it come out of you in an honest way…” said Hedgecorth.
Her role as the dancer, or Baile, fulfills a significant part of the complex Flamenco performance.

Due to the complexity of Flamenco, especially where the language gap is concerned, it is difficult for those foreign to Spain to truly claim mastery over this art form. But the group coming to Washburn has become proficient.

Hedgecorth will pass on what she has learned to some lucky Washburn students prior to her performance on October 2. The day before, she will be holding a workshop to teach some students about the basics of Flamenco.

For those interested in learning more about Flamenco, be sure to watch the video included above, or visit this website: https://www.britannica.com/art/flamenco

Students interested in witnessing this event are welcome to park their cars in lots 8 and R, by Henderson and the Mabee library. Students can also stand and watch from a distance, if they so choose, as long as they maintain social distancing and wear masks. This event is not open to outside guests. Washburn is being cautious and is following protocol that states we should greatly limit the amount of visitors because of the risks involved.