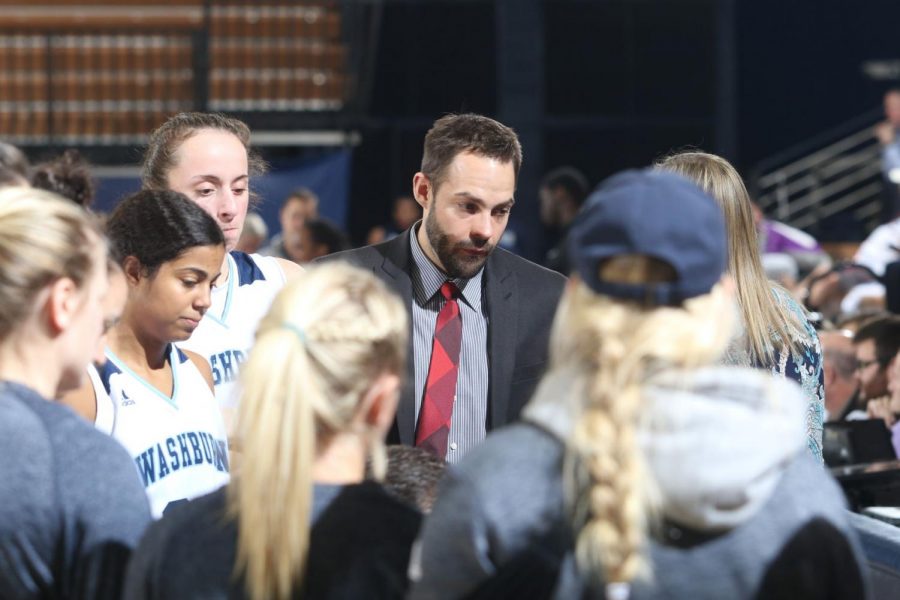 Leader: Todd Stutzman listens in on a timeout and helps coach his team. Stutzman spent time in Tennessee and Texas and is happy to be coaching closer to home.

Ron McHenry has the most wins than any other coach in Washburn women’s basketball history. McHenry has had numerous good assistant coaches along the way and that is no different now with Todd Stutzman.

Stutzman is entering year number four with Washburn and with just three total coaches on the staff, Stutzman plays a big role. Along with assisting for the women’s team, he is currently leading the junior varsity team as well.

Stutzman is from the small Kansas town of Hesston where he played high school basketball but chose not to continue playing in college. He decided to attend KU instead where he would graduate with a degree in liberal arts and sciences and a minor in business.

It was during this time at KU that Stutzman decided he couldn’t live without basketball anymore.

“I went to KU and missed being around it,” said Stutzman. “So, I started being a manager for the women’s basketball team there and I was a practice player and just got back around the game that way and decided to stick with it then.”

After graduating from KU, he spent a year as a graduate assistant with Memphis. As a grad assistant he had several responsibilities including cutting, editing and exchanging film, scouting reports, helping with practice and assisting with day-to-day operations within the program.

Stutzman’s first big gig came with Stephen F. Austin’s women’s basketball program. There he served as the director of operations where he said he did a little bit of everything. Everything included coordinating team travel, practice times, game scheduling, financial planning and overseeing the video team.

Brandon Schneider was the head coach Stutzman worked under at Stephen F. Austin and is now the head women’s coach at KU. He was involved with the MIAA as a coach at Emporia State and that is how Stutzman became aware of the job opening at Washburn.

“As soon as I saw this position was open I knew I wanted to go after it and get closer to home and really get on to the assistant side of things,” said Stutzman.

Though he liked his director role, he is enjoying assistant coaching much more.

“It is safe to say [that he likes assistant coaching more],” said Stutzman. “I have much more one track duties here than I did there.”

Stutzman is a people person which is what he enjoys most about coaching. He enjoys the relations with the players. It gives him great joy to look back and see that he had an impact on young student-athletes lives.

And like many athletes he enjoys the opportunity to still be competitive and put scouting reports together and then go out and see the players put it all together and have success.

He even likes to compete with himself in his time off when he spends hours on the golf course. Stutzman loves to spend days out on the course during the summer.

Because of his passion for golf he hopes to someday attend the prestigious Masters golf tournament in Augusta, Georgia.

When not on the course Stutzman enjoys taking his dog for walks. He says that she takes up a lot of his time outside of coaching.

The relationships Stutzman builds with his players are important to him and junior Sam Mallonee is one of those players effected by his personality.

“He pushed me to achieve things I thought I couldn’t,” said Mallonee. “I could go and talk to him if need be, whether it was about school or basketball it didn’t matter. Not only did he show me how to be a leader on the court but off the court as well.”

The time and effort that Stutzman has put in is paying dividends now as the Ichabods are lurking near the top of the conference standings. They will look to continue their success when they go to battle with Northeastern State on Valentine’s Day, Thursday, Feb. 14 at 5:30 p.m. in Lee Arena.