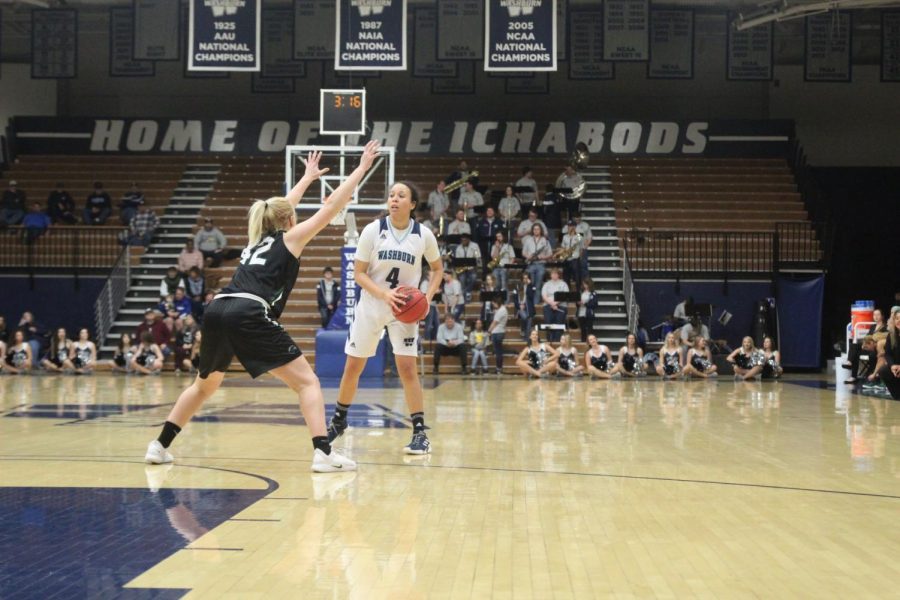 Spread the offense: Senior forward Taylor Blue looks for the open teammate to pass the ball. The Ichabods beat the Northeastern State RiverHawks, 73-60.

On Valentine’s Day the women’s basketball team battled the RiverHawks from Northeastern State. Before the game started, the Ichabods stood at 16-4 with the second-best record in the MIAA.

The second quarter started with a bang as the RiverHawks drained their first shot of the quarter, but the Ichabods answered back and in a big way. The Ichabods went on to rattle off nine straight points to retake the lead. The RiverHawks would not back down from the fight going on their own little run. They led 26-24. Then the game turned into a dog fight. Both teams had to fight for every point they received. At the end of the half, the Ichabods grabbed a 33-30 lead.

Just like the first half, the third quarter was a battle. The Ichabods extended their lead to five, but the RiverHawks would not let it get any larger. The RiverHawks stayed with the Ichabods by shooting 3-5 from three-point range. The Ichabods were able to keep Northeastern State from gaining any serious momentum. By the end of the quarter, the RiverHawks had cut into the Ichabod lead but were never able to take the lead.

The win pushes the Ichabod record to 17-4 on the year. For the senior forward, Nicole Murugarren, the game went according to plan.

“The game is 40 minutes and at the end of the first quarter we were down by one I think, but we don’t have to freak out or think about it. We still have 30 more minutes to play. We trust each other and we played really well,” Murugarren said.

Even though they did not start out well, senior forward Taylor Blue knew to keep playing and it would all work out.

“I’ve played many games where the start wasn’t great, so you have to finish strong every game. We knew we had the game. We just had to stay patient. The clock was on our side the whole game. We just had to keep pushing and go strong on mainly defense making sure they don’t score. It was kind of back and forth every possession,” Blue said.