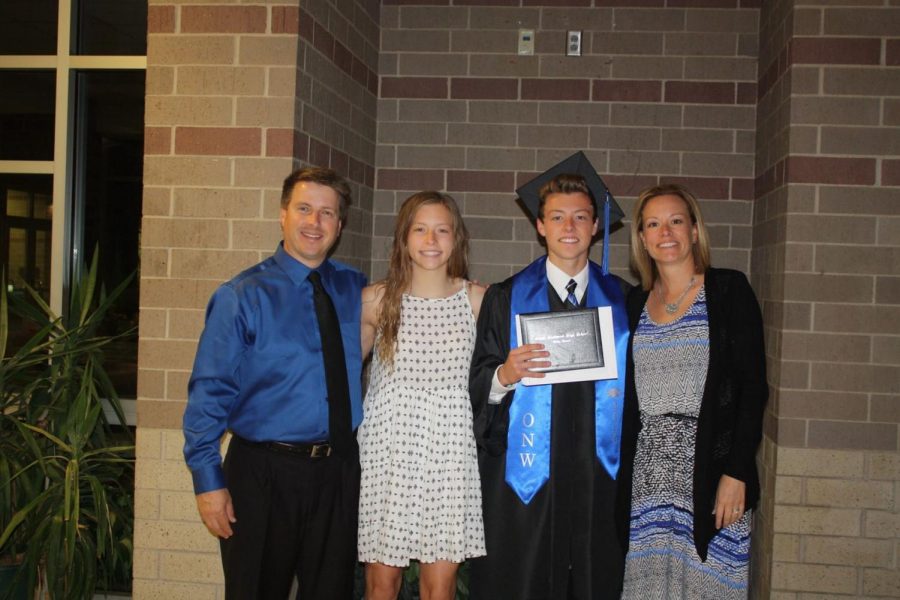 Looking for a win: Rachael Mayberry stands with her family at her brother Carter's graduation. Mayberry is part of a pole vault team that is ranked second in Division II right now.

“Coach [Rick] Attig is the coach that’s taught me everything from the ground up about pole vault,” said sophomore pole vaulter Rachel Mayberry. “So, if I had the option to come here [to Washburn] and do four more years with him when I already know he’s going to teach me to be the best I can be then that was the school for me.”

Mayberry may have chosen Washburn for her connections to the coaching staff, but her love of the school has only grown from there. She’s become a valued member of the track and field team, made close friends and followed her passions in the classroom.

This season Mayberry has set herself up well for national qualifying. She currently has an NCAA provisional mark of 3.86 meters. Mayberry and the rest of her pole vaulting squad are currently ranked second in Division II.

In the classroom, Mayberry is majoring in forensic investigation with high hopes for a future career path.

Ever since she was young, Mayberry has enjoyed watching crime shows on TV. She said that the worst crimes are the most interesting.

“I’ve always been such a curious person,” said Mayberry. “So, when I watch the show, or [if] anything happens in my town, I always want to be in the know and I want to be involved. I don’t really get grossed out by the gruesome things.”

As a busy athlete, eating and Netflix are high on her list of spare time activities. Mayberry said her all-time favorite food is pizza, but she is currently trying to eat healthier during the season. Instead, she and her teammates enjoy making smoothie bowls with fruit.

Although Mayberry always planned on attending a larger college, the small campus feel of Washburn has turned out to be a blessing in disguise. She loves being able to know so many people on campus and has been able to become closer with her friends.

Mayberry is from Olathe, Kansas, where she attended high school at Olathe Northwest. Her parents are Brent and Marilyn Mayberry. Her mother is a paraprofessional and works with special needs children, which Mayberry said she enjoys doing. Her father works at UMB in downtown Kansas City as a software engineer. She has one brother, Carter, who is a senior at the University of Kansas.

Recently, Mayberry had the opportunity to attend the New England Patriots vs. Chiefs game in the AFC championship because her dad is friends with KC offensive coordinator Eric Bieniemy. She experienced hanging out with Bieniemy’s family during the game and talked with the players’ families as well. Had the Chiefs won the game, Mayberry said she was going to be able to go out on the field afterwards.

Mayberry will be shooting for championships of her own this year after qualifying for indoor nationals last year.

Her fellow pole vault teammate, Natalie Lanman, has recognized her hard work and loves to see her succeed.

“Rachael has been working incredibly hard to make her return to indoor nationals,” said Lanman. “She really brings her A-game in practice, like she would a meet because she wants to keep on her upward trend and really be able to give it her all at conference and nationals.

Next up, Mayberry and her team will be at the Nebraska Tune-Up Friday, Feb. 15 in Lincoln, Nebraska.