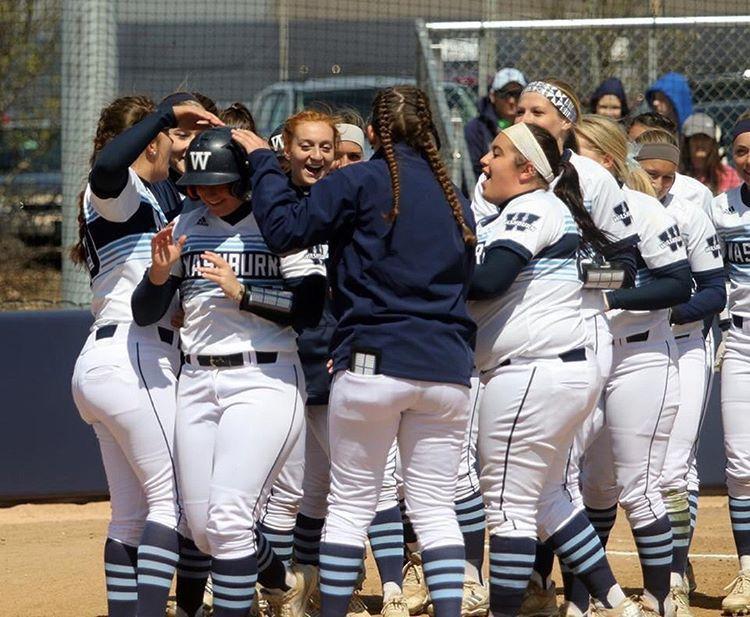 We are a team: The softball team surrounds home plate to celebrate senior Savannah Moore after she hit a home run. Moore was an all-MIAA third baseman.

One of the largest contributing factors to Washburn athletics programs is the talent located here in Topeka. Many of the greatest athletes to have ever played for Washburn originated from Topeka. One of the stars on this year’s softball team also comes from Topeka, her name is Savannah Moore.

“I grew up here, I’m from Washburn Rural and I played for [Brenda] Holaday for a while. I am the oldest of my family. My brother and sister both went to Washburn Rural. My brother is here at Washburn, my sister is a senior and is coming to play softball here next year. I will be gone, but it will be really good for her to get into this program, I am really excited to keep this family here,” Moore said.

The will and the drive to succeed were born into Moore. Head softball coach, Brenda Holaday believes that the game that Moore loves allows her to bring out the best in her.

“Savannah played for me in high school, club ball and at WU. She has very natural leadership qualities in that she is responsible, cares about the success of the team, extremely disciplined, never hesitates to do the tough things in regard to leading her teammates and above all, she is highly competitive. She is a tremendous player and a better person,” Holaday said.

Coming to Washburn after high school, Moore was a part of a couple of teams that had lost more games than they had won. So, when they won the MIAA Conference title last year, it was special.

“Winning the conference, the past few years Washburn hasn’t been very good at softball so the fact that we were able to bring in a new coach and a bunch of new players to really make this program to really make it what it should be so that was really great,” Moore said.

Even though they had one of the best seasons in program history last year, Moore wants this year’s team to be even better than last years.

“I know we have a big team goal that last year we had the highest fielding percentage in the nation and we definitely want to do that again and at least be in the top three. We want to make it back to the conference tournament and this year we don’t want to make it to just the regional tournament, we want to make it to the super regional, so taking that next step for the program,” Moore said.

Softball is not the only part of Moore’s life. When she has the free time, Moore likes to relax and unwind. One of the ways she does that is by reading. Some of the books that she reads allows her to be able to think.

“I really like doing yoga, and I really like reading, I am a big book worm. I have a lot of favorite books, but one I really like is called The Kind Worth Killing by Peter Swanson. It gets you thinking a lot. I like books that make me think,” said Moore.

In the future, there are two projects on Moore’s bucket list.

“I would love to go skydiving. I would really love to travel to Europe anywhere in Europe I love Europe, but I am actually doing that this summer after the softball season. I am really excited for that,” Moore said.

For the majority of all collegiate athletes, college is the last time they have the opportunity to play the sport that they love. Moore will be ready when her time as an Ichabod comes to an end.

“I graduated college last year with my undergrad degree, so I am currently playing my last year and I will graduate again in May so I’m pretty proud of that. I want to graduate with my master’s degree. Then I want to get a job in the surrounding area, not necessarily Kansas City, I have been looking a lot at Oklahoma City lately and I really want to do marketing or event planning for weddings, so I would like to be a wedding planner,” Moore said.