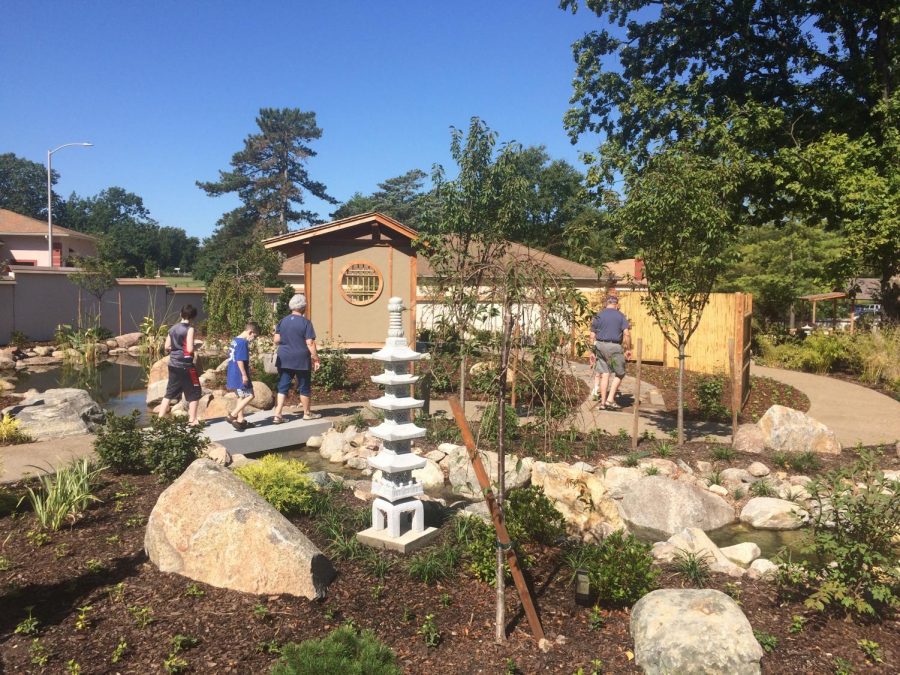 Winding Trails: The first zoo guests to enter the garden begin to make their way through the area. They gazed upon the greenery with wonder in their eyes.

The Topeka Zoo was proud to announce the long-awaited opening of Kay’s Garden last week on August 27th. The new Japanese-inspired garden brings an added layer of beauty to an already attractive part of Topeka. Attendees can find both peace and serenity beneath the shade of elder oak trees. They can relax among the vibrant shrubbery or next to the gentle streams of water running through the garden.

The creation of this new garden began in 2018 when an official ground-breaking ceremony took place. The planning for the massive undertaking began as far back as 2012. As the years passed, the Zoo took the relatively simple, initial designs for the area and expanded on them. Eventually, they hired a Japanese garden master to help fulfill this new vision.

The garden’s namesake is Kansas Supreme Court Chief Justice Kay McFarland, who helped get the project off the ground back in 2012. She served on Kansas’ Supreme Court from 1935 to 2015 and is credited with many historic accomplishments including breaking down gender barriers in the state. She was the first woman to be elected to a judgeship in Shawnee County, the first to be appointed to the state Supreme Court and the first to hold the title of chief justice.

McFarland’s many generous donations to the Topeka Zoo eventually culminated in the realization of her dream. Her vision was to install a koi pond with a bridge over it and a garden area. After her passing, the trustees of the Kay E. McFarland Living Trust fund, Howard and Elaine Schwartz, and numerous other donors, made sure that the project kept moving forward.

The Japanese Consuls were guided on a tour of the zoo while others continued to file in. In the meantime, guests were encouraged to take origami cranes from a nearby table and sign their names into a guest book. Every guest was instructed to write a wish on the wings of their crane and to hang it on nearby bamboo shoots along the road that leads to the garden’s entrance. Origami cranes are meant to symbolize hope when they are strung up in this manner. It comes from a tradition dating back to the aftermath of the atomic bombings of Japan, where a thousand such cranes were put up in a similar fashion.

Guests were also treated to an exciting performance by the band Three Trails Taiko (Drum). Using traditional Japanese drums, this volunteer group put on an impressive display for all those in attendance. The fast paced drummers played with such force that this reporter could feel more than hear the effects of their efforts.

“We are docents for the zoo. Our job today is to guard the drums for the band,” said Jolene Garcia alongside her husband Jim. “I think this is a wonderful new addition to the zoo. It adds a great deal of beauty to the zoo, and is just the first of many new projects and improvements that the zoo will be making.”

At 10:00 AM, the proceedings for the opening of the garden began in earnest as Zoo Director Brendan Wiley delivered a moving speech.

“It’s probably worth thinking, for a moment, about the situation our world is in today,” said Wiley. “Those news stories that we’re seeing. While this garden tells a story of life’s journey, of love in a family, it’s also a symbol of hope and change.”

His speech was followed by some short remarks from Pat Colley.

Next up to the mic were Elaine and Howard Schwartz. To celebrate this momentous occasion, the Schwartz family came dressed in traditional Japanese robes referred to as Kimono. They were joined in front of the crowd by a couple of their grandchildren who also sported Japanese attire.

“The chief took many paths which led to great things,” said Ms. Schwartz. “Just as the paths in this garden all lead to greater sights and places of reflection. She wanted a garden for individual contemplation and serene thoughts. She envisioned people sitting and reading in her garden, finding tranquility to still their minds and hearts.”

Following the Schwartz family was our city’s mayor, Michelle Del la Isla, who gave a rousing speech on the legacy and memory of Kay McFarland.

“What a day to celebrate the opportunity of peace,” said Mayor Del La Isla. “To know that a person from our community decided to leave a legacy… What is your legacy going to be? I want all of you, as you walk through this beautiful garden, to ponder on that.”

Next the garden’s grand designer stepped forward to speak a few words. He expressed his appreciation for everyone in attendance and softly apologized for his English being “so-so”, as he put it.

“After I was invited to the project two years ago, I spent my time meditating and thinking about what this garden is meant to be. I have carried this image to today,1 and now I can finally share my vision with you.”

The Consul General of Chicago rounded up the speeches for the morning, and commented on the beauty that the new garden will bring to Topeka. He was then joined at the podium by members of the Schwartz family, the mayor, Wiley, Colley and one another Japanese dignitary.

The official ribbon cutting ceremony for the garden was very different from any previous event. Instead of simply cutting a piece of cloth to signify that the garden was now open, the special guests held a more traditional ceremonial experience that has its roots in Japanese legend.

The Consul General of Japan in Chicago explained that the ceremony, which involved the special guests using wooden mallets to crack open a barrel of sake, comes from an ancient Tokugawa tradition, in which the cracking open a barrel of sake was meant to signify good fortune to come.

The barrel used in the opening ceremony, however, was purely decorative. Much to the disappointment of all, a Japanese beverage did not spill out.

With the ceremony concluded, guests were allowed into the garden. They were led to its entrance by Wiley, who told a story about Morimoto. He told about how the garden master had placed a large boulder near the entrance for the purpose of laying aside one’s grievances and stress. This is done before entering the place of reflection and peace, so that one doesn’t carry such weight with them in a place of beauty.

“I had the pleasure of coming through and meeting Koji, and getting a tour of the garden while it was still under construction and, honestly, it built a lot of anticipation in me, as I couldn’t wait for this place to open,” said City Council member Mike Padia. “Gage Park is such a gem to Topeka. This elevates Topeka as a prime destination for visitors from around the world.”

The garden itself is expansive. It covers 2.5 acres of space and contains the zig-zag bridge, the koi pond and a large event center, which is home to a miniature museum dedicated to Kay McFarland.

Every twist and turn of the garden paths reveal new sights and sounds, hidden works of art that are not visible at first glance. Shrubs and budding plants dot the space around the paths, and peek out from their mulch and gravel beds. Elder oak trees that are more than a hundred years old provide copious amounts of shade to guests as they explore this new area.

“It’s beautiful and peaceful. I love the water features. They are very calming and soothing,” said Jaren Turby, a visitor to the garden, who brought her two grandchildren.

As the guests made their way through the newly opened garden, they couldn’t help but to take photos, and point out their favorite parts. Three Trails Taiko moved their drums into the garden to play and set the mood.

“It is beautiful,” said Heather Westin. “It feels like there’s a calming breeze coming through here more than out there. It’s very strange. We love it.”

Impressive. Tranquil. Breathtaking. All are good words to describe the garden and the beauty it brings to Gage Park. Another word comes to mind: timeless. This garden has an aspect of eternity within it that speaks volumes to all who enter. It has been cultivated in such a way that it will be here for many years to come.

“Every rock has been intentionally placed,” said Morimoto. “Every element serves a purpose.”

The garden is open for any who are looking to find some peace during the hustle and bustle of everyday life. I strongly encourage anyone who seeks relief from the stress of college: Take the time to lay your worries aside, and enjoy the serenity of the master Morimoto’s work.