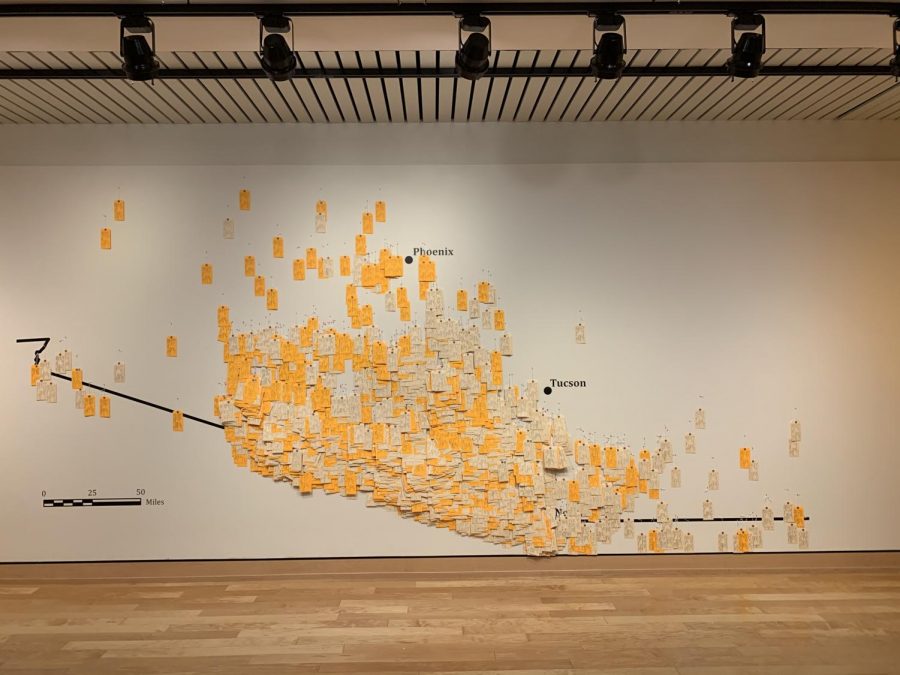 The toe tags on the wall: This is a picture of the exhibit. Toe tags on a map are displayed to show the lives that were lost on the journey.

“Hostile Terrain 94” is an exhibit at the Mulvane Art Museum on Washburn’s campus. The exhibit was started by the Undocumented Migration Project and it displays more than 4,000 toe tags to represent the individuals who risked their lives for a chance at a better one from 1994 to 2019.

In 1994, the U.S. Border Patrol closed off easily accessible ports-of-entry to limit the number of undocumented migrants flooding into the United States. This left the areas of “hostile terrain” as the only way to cross the border. These paths have been traveled since the mid-1990s, resulting in the foot traffic of more than six million people.

The exhibit displays a partial map of the U.S. and Mexico border in Arizona, where the migration took place. Tan and orange toe tags that represent individuals who died on the journey fill the wall. The tan toe tags represent people who have been identified, and the orange toe tags represent unidentified remains. The toe tags are placed in the specific spot on the map where the remains were found. The toe tag gives information on the name of the remains. It displays the name, age, sex, date reported, cause of death, body condition and the geographical coordinates of where the remains were found.

After getting a closer look at the toe tags, you can see how widely the causes of death range as well as the ages. Some examples of causes of death are: blunt force trauma, hypothermia, exposure, asphyxia, drowning, gunshot wound, and undetermined. Undetermined is the most common cause of death. Ages range from 15 years old to 58 years old.
“It was just really sad to look at,” explained sophomore Silicia Moreno, as she looked at the toe tags.

Members of the community have taken part in making this exhibit come to life. Community members filled out all 4,000 of the toe tags to make the exhibit possible. Attached to some of the toe tags, is a QR code that can be scanned with a smartphone to give more background information about the person.
“ It will pull up information on that particular person, who they were,” explains Connie Gibbons, director of Mulvane Art Museum. “ There are some photographs of the people who started to get a sense of who these people were.”

This exhibit is on display at the museum to show people how difficult the journey is. Millions of people go on it just for the chance at a better life.
“I would recommend it,” explains Moreno, “just so people can get a perspective on the situation.”
Gibbons hopes that the entire community will take time to see the exhibit, so that they can grasp the truth of this situation, not just in the Washburn community, but in all of Topeka.
“It’s out of sight, out of mind,” Gibbons explains. “You have to recognize that what is happening is real; these people are real.”

The “Hostile Terrain 94” exhibit will be at the Mulvane Art Museum until November 3rd.