Brad Eidenmueller: From Germany to Washburn 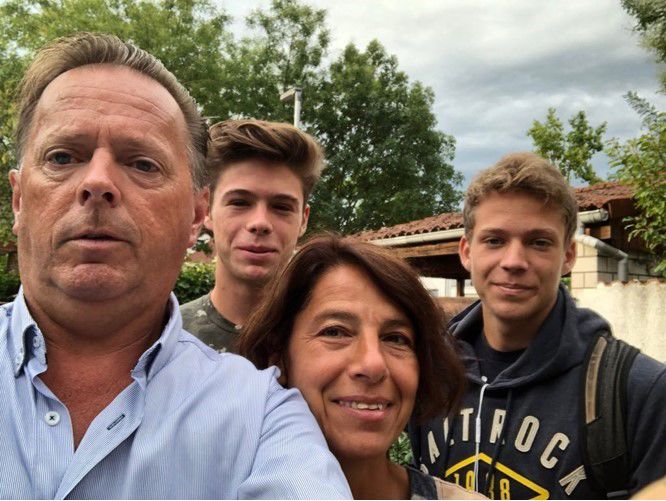 Tennis titan: Brad Eidenmueller stands with his parents and younger brother. Eidenmuller's mother was a huge influence on jump starting his career in tennis.

The Washburn men’s tennis team has started the season strong, winning four of their first six matches, and most recently sweeping Dallas Baptist University. Among the strong starts has been sophomore Bradley Eidenmueller.

His parents are Chris Lye and Vera Eidenmueller. Both of them work for the same company, his father as a project manager and his mother as a SAP analyst. He also has a 16-year-old brother.

Eidenmueller began playing tennis around the age of six while also playing several other sports. As he grew up, he decided he needed to pick either tennis or soccer, and because he wasn’t the most fond of his soccer team, he chose to stick with tennis.

His tennis career has a different dynamic than that of a high school student in the U.S. In Europe, school and sports are two separate entities.

“It’s different,” said Eidenmueller. “It’s more like private clubs and private owners. There are university teams, but you don’t get paid [tuition] or anything like that you just do it for your personal enjoyment.”

The move for Eidenmueller to come to the U.S. centered mostly around his tennis career. He wanted the opportunity to play tennis in college, and making that happen back in Germany would have been a much bigger challenge.

For starters, Eidenmueller wouldn’t have received scholarship money and would have to pay for school out of pocket. He also said that the university’s academic programs are so challenging that being able to fit tennis into his studies would have been nearly impossible.

Washburn University caught Eidenmueller’s attention for a few different reasons and he decided this would be the best fit to further his academic and tennis career.

“They made me a good offer,” said Eidenmueller. “They have a good tennis program, I think we’re ranked in the top 25 for Division II as well so that’s pretty solid.”

Once he arrived on campus, he grew fond of Washburn and the environment.

“I definitely like the campus a lot,” said Eidenmueller. “It looks really nice and all the classrooms are cool. I like the professors a lot. It’s not the biggest university, which I like, so you know most of the professors, [and] if you need help you can ask them. I like that a lot about Washburn.”

“He is more than just my teammate,” said Dicu. “He is more like my brother. No matter what happens we got each other’s back. Brad is the type of person you can count on, no matter the circumstances.”

Eidenmueller is studying in the kinesiology department as a sports management major. He is also minoring in business in hopes of becoming a sports club manager. He prefers a career in tennis, but would be excited to work with any sport.

Eidenmueller is extremely committed to his studies and spends many hours doing homework.

“Getting my homework done is something I almost have to call a hobby because I do it so much,” said Eidenmueller.

Aside from homework, Eidenmueller spends the rest of his time hanging out with his buddies on the team, playing soccer and basketball at the SRWC.

All of his focus will be on tennis when he and his teammates return to the court at 1 p.m. Saturday, March 2 to host Newman University.