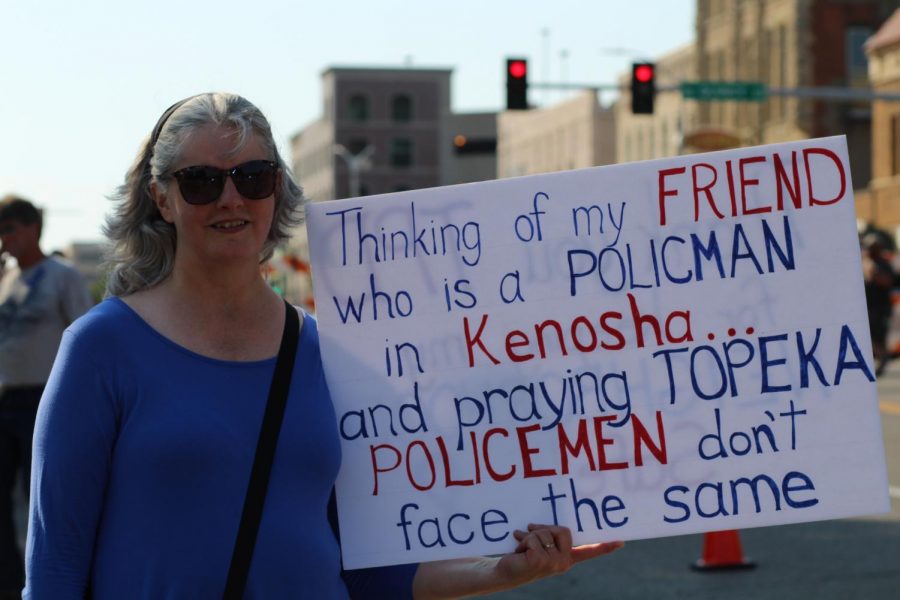 Community member Karen Pope holds a message at her side at TPAC to show support for local policemen.

At the center, lies Chartell Grissom, a junior majoring in Public Administration and a LinC Bonner scholar, standing in the middle of “Back the Blue” rallyers, holding a “No justice, no peace” poster.

From this experience, Grissom learns a lot from her community and about herself.

Grissom accounts her feelings of nervousness as she walks up to the event with her two trusted friends: Marcus Miller and Tyler Frazier, Sophomore majoring in Biology. As soon as she walked out into the open area where crowds were chanting. A speaker at the top of the steps, chants as well.

“I walked in through the open area and a man came up to me,” said Grissom. “He just started chanting in my face: ‘Black the Blue!’ He definitely was not social distancing. I haven’t experienced that at an event. I was shocked, honestly. He walked straight up to me and got in my face and did not think about restricting for COVID or anything about personal space as a person.”

From this experience, Chartell realizes this division in her community. A division of core values is being put to the test, arguing which side is better.

“It was sad to see the division that day,” said Grissom. “I love people, all people. I was sad because at the end of this, we go home and we are all people. I’m going to see one of these people at the grocery store. These are the values they really hold in their heart and they are okay with that.”

There is a common theme that ties each side together: wanting to be heard and felt as lives are lost on each side.

“To me there is a lot of miscommunication,” said Grissom. “I feel like a lot of people who support Blue Lives Matter feel that they want to be heard too. I can understand the feeling of wanting to be heard.”

“To me, that is just a one-street-way mindedness. This is not us against them. That is not how it should be.”

In her eyes, Grissom views the Black Lives Matter movement as standing for what the statement says. Grissom accounts to a time when black lives were treated as if they did not matter.

“Even if the black person isn’t innocent of a crime and is guilty of a crime,” said Grissom,” shooting them is not the answer. You can’t ignore the inequality of the way that they treat black people as compared to their white counterparts.”

The Black Lives Matter movement spread across the country, founded on July 13, 2013, according to blacklivesmatter.com. Shortly after, the Blue Lives matter gained traction on Dec 20, 2014, according to archive.bluelivesmatter.blue.

“There’s been a major pushback on that because it felt as if Blue Lives Matter came to counterprotest and say: ‘Well, don’t forget about us.’ In my mind, it doesn’t mean that police officers don’t matter. It’s saying that black people are treated as if they don’t matter. So they need to be shown that they do.”

“I have had two kids graduate from Washburn and I feel much safer having police officers on campus for the protection of all the students,” said Pope. “Our country was founded on law and order. We need to maintain that.”

Pope supports the police who put themselves in the line of fire everyday. When most people turn away and run, police sprint towards the flames.

“I do believe that black lives matter,” said Pope. “Every life matters. But the Black Lives Matter group has not helped any black kids in dangerous neighborhoods. Their message is kind of hollow to me because they are not really supporting black lives. They are just promoting a political agenda.”

When both sides feel misrepresented, a chemical combustion takes place, leaving both sides separate but distinct lines in history.

Both sides are deeply rooted in their beliefs and values and yet they share a common feeling of grief over lost lives, the sting of not being understood, and an understanding of all people striving toward a common good.

“At the end of it all,” said Grissom, “I believe that love is going to win.”