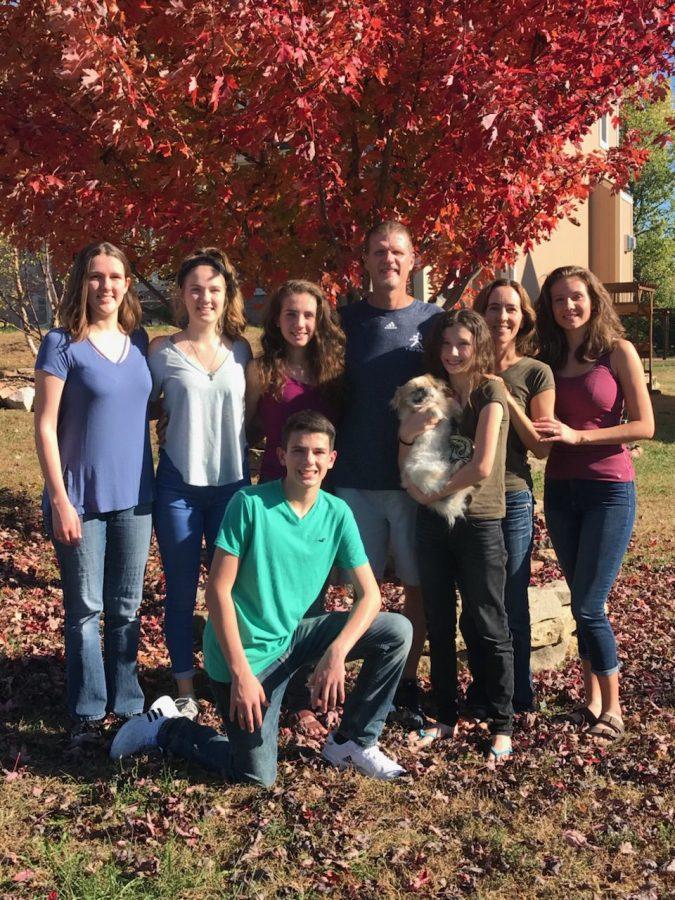 It may be cold outside, but it has been a hot start for the Washburn women’s tennis team. They began the spring season with a perfect 5-0 record.

Junior Madison Lysaught has been contributing to the early season success.

Lysaught is from Topeka and attended high school at Shawnee Heights. She is the eldest of six children in the Lysaught family, which includes four sisters, Mallory, Madeline, Miriam and Melanie, and one brother, John.

“About half of them [play tennis],” Lysaught said. “And then we also have some musicians in the house, so it’s kind of a mixture of different talents.”

Lysaught is the daughter of Alisa and Lance Lysaught and is fortunate to experience a different dynamic with her father as her college tennis coach.

While playing in high school, Lysaught strived for success all four years, including making four trips to the state tournament. She placed 13th at state participating in doubles competition in her freshman year. For the next three years, she competed in the singles competition and improved her placing from 11th to winning fourth her senior year.

“My goal was to perform better than I did the last year,” Lysaught said. “Even if I didn’t feel like I did the best I could, it was still a good feeling knowing I placed higher. Then that last year, placing fourth, I felt really proud.”

Over the years, the coach-player relationship Lysaught has with her father has evolved. Her father was her coach at a young age when she first started playing, but the dynamics of the situation were difficult for her.

“Emotionally, I wasn’t in a place where that was good for me and it was difficult,” Lysaught said.

Around the age of 14, Lysaught quit playing tennis but returned after a few years. She looks at this break as a positive in her career. The decision to return to the game was hers, not her father’s.

Upon her arrival to the Washburn tennis team, her father began coaching her again. Lysaught says it took some time to adjust to it and that it wasn’t easy, but she now has a healthy relationship with her father and is happy to be playing at Washburn.

It may have seemed like a slam dunk that Lysaught would attend Washburn and play tennis, but it was really more of a coincidence that she ended up playing for her father.

“I wasn’t one of those people that wanted to go far from home,” Lysaught said. “Washburn has a really nice campus, they’ve put a lot of work and money into growing, so it was close to home and affordable for me, regardless of the fact that my dad is the coach here. I want to play tennis and I wanted to work to become good enough to be on the team. Now I’m here.”

This is Lysaught’s third year at Washburn and she enjoys the school for more than her tennis career. In particular, the close knit dynamic between the students and the faculty stands out to her.

“I think Washburn’s unique in the students to faculty relationship,” Lysaught said. “There’s a lot of faculty there to help out the students and they really put in that effort to have a one-on-one relationship. They really care and want to help, so I think the support from the faculty and staff is really amazing.”

Those faculty members are helping Lysaught succeed in her pursuit of working in the kinesiology field. She is currently majoring in exercise physiology and is exploring what specific direction she wants to take.

Lysaught is taking a field experience class this semester that allows her to job shadow different sports chiropractors, strength and conditioning coaches and trainers in hopes of helping her find out what she is most interested in.

Between the workload of her school work and her passion for tennis, Lysaught doesn’t have an enormous amount of time for anything extra.

Her main free time activities include hanging out with her family, cooking, doing yoga and traveling when she can. She says even if she simply travels somewhere else in Kansas to hang out with her friends, it’s better than nothing.

When it’s not tennis season, Lysaught doesn’t let her guard down. She never leaves tennis mode and continues to play throughout the summer to keep her game sharp for the upcoming season.

“She certainly is one of the most improved players on the team currently. A lot of that I most definitely attribute to the hard work and hours she puts on court, especially in the off-season. Hands down, she continues to put more and more time into trying to get better for herself and for the team,” said Czapinski. “I look at her as one of those college players that when they graduate she’s going to have no regrets about her college career.”

The women’s tennis team will open their home schedule at 6 p.m. Friday, Feb. 22 when they host the Air Force Academy at the Topeka Country Club.