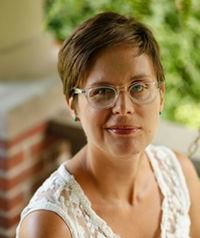 Brown Bag body shame: Louise Krug talks about body shaming during her Brown Bag Lecture. The lecture included personal stories and encouraged others to share their own experiences.

Assistant Professor Louise Krug began her Brown Bag lecture with a story. She informed the audience that she had once been at a yoga class when someone inquired about whether or not she was pregnant. She wasn’t. She then posted about her experience on Facebook, prompting others, mostly women, to share their own similar experiences.

Krug used this event as an opportunity to write about gender and how body shaming is often involved. Within her story, she mentioned Brené Brown, who is a researcher and social worker at the University of Houston Graduate College of Social Work. Brown is known for her research on the mentalities of vulnerability, courage, worthiness and shame. These topics are often considered hot button issues because there are many people who can relate to them. Due to Brown’s research, Krug has taken several paths to integrate what she learned from Brown and included it with her community experiences.

The lecture made the audience think and consider their reactions to a question like this, whether they were male or female, and how they would feel about said question.

“One thing that really surprised me is that people didn’t respond as I thought they would to the anonymity of the Poll Everywhere site I had created,” Krug said. “They seemed to prefer their name attached to body shaming stories.”

Perhaps this is due to the sympathy that can arise from sharing such stories. Perhaps not maliciously, but more because it includes them in the situations that they are witnessing. Body shaming itself is a terrible thing, but everyone does it. It happens quite often with children who don’t truly understand their brain-to-mouth filter, although plenty of adults and teenagers do it as well.

This is part of human nature. Seeing others come forward seems to help motivate people to include their own stories. The #MeToo movement is a big indicator of this. Seeing someone post about something that has happened to them without fear is a big motivator for others. It encourages people who might feel that their situations or scenarios aren’t important enough.

This need for understanding truly is remarkable. It encourages vulnerability and begets validation. Telling your story prompts others to take notice and console you, which leads to their stories, and in turn vulnerability begets vulnerability.

Throughout Krug’s Poll Everywhere responses, there were some who didn’t share equal vulnerability. Some people posted very painful and intense stories that couldn’t or shouldn’t be shared with everyone while others posted silly stories that weren’t truly in the original spirit of the post. This made it seem as if the stories being told were nothing more than little snippets that should be shared with everyone.

With vulnerability, sharing with others is good, but there is a time and place to joke. Krug’s lecture truly expressed this concept.

Rebecca Lewis, mass media major, has experienced body shaming. She was interested to hear what Krug had to say.

“Body shaming is something that I have witnessed and had done to me often in the past so going to this made me realize how common it is,” Lewis said. “It isn’t something that should be taken lightly, but then again, it shouldn’t be taken too heavily if it becomes less of a problem.”