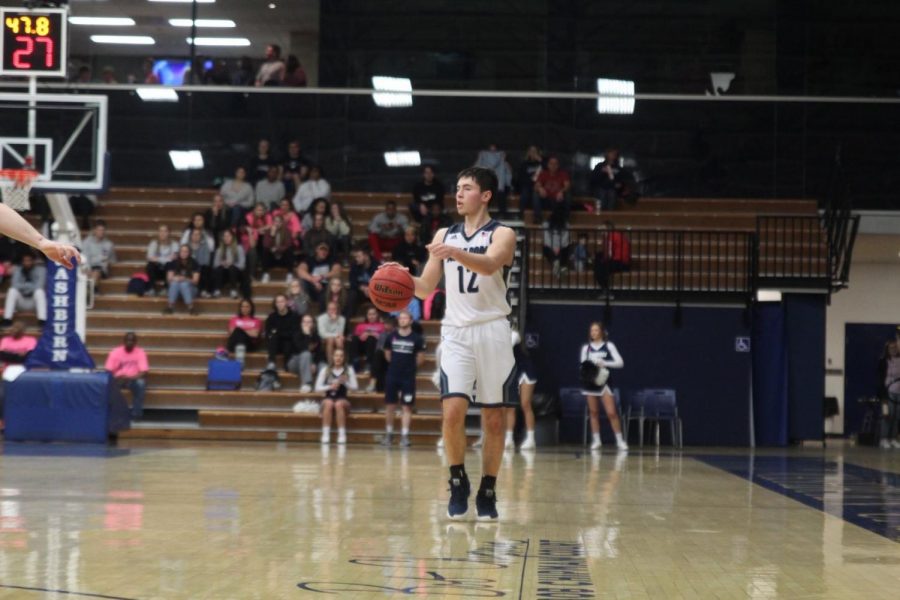 Tyler Geiman directs the offense as he brings the ball up the court. Geiman, playing point guard, was the key to the offense according to Sevon Witt.

The toughness of the Washburn Ichabods was apparent at Lee Arena on Saturday, Feb. 2. This aggressiveness helped guide them to a bounce back win after losing last Thursday. Lindenwood took the early lead, but once Washburn caught up to them, they would never relinquish that lead and the Bods went on to win 84-77.

Early on, the emphasis was to get the ball down low and work the offense through seniors David Salach and Tyas Martin.

Washburn’s first eight points came from that combination, but it was the Lions gaining the early advantage 11-9.

No lead was safe throughout the first half, as no one led by more than four. It was a back and forth battle that saw Washburn take its first lead on a three-point ball from senior Javion Blake that made the score 19-16.

The game took a more distinct turn when Lindenwood was called for a foul, and that same player was immediately called for technical foul on top of it.

Four consecutive free throws ensued with Blake making a pair and freshman Sevon Witt hitting the other two. That gave Washburn a 27-25 advantage.

The three-pointer helped guide the Ichabods to the half as freshman guard Jalen Lewis found the bottom of the net from deep. Sophomore guard Tyler Geiman followed suit with his own three with 30 seconds remaining in the half and Washburn took a 35-32 lead to the halftime locker room.

Blake seemed to find some traction on offense on his way into the locker room for half time, because he came out hot to start the third quarter. The old Bods theme of defense sparking offense seemed to show itself in this game.

Blake said, “We’re a defense first team, so I think getting that energy on defense and getting those stops we were able to run out on offense, get into fast breaks and get those easy transition buckets.”

The defense certainly turned the tide of the game because Washburn was able to push the lead up to double digits just three minutes into the second half when they led 47-37.

A balanced offensive attack kept the lead intact and every time Lindenwood would challenge to get back into the game Washburn would make a play to keep them at an arms-length away.

With around four minutes left to play, the Lions started to make a final push. This forced Lindenwood to foul and Washburn put the game away at the free throw line to secure an 84-77 win.

The MIAA is a tough conference from top to bottom so nearly every game is close which is something the team is always aware of.

“Just stay composed,” said Blake. “Being a senior and being through this battle of the MIAA before I just try to show leadership and not show the young guys how to get rattled.”

The win gets Washburn back on track and headed in the right direction after a tough loss on Thursday.

Witt said, “Toughness, competitiveness. Everybody competes from one to fifteen. Even the bench, the bench is competing on the bench and that’s crazy. I haven’t ever played with a group of guys like this.”

Washburn now sits at 15-5 overall and 8-3 in the always tough MIAA. The Ichabods will be back in action against Central Missouri at 7:30 p.m. Wednesday, Feb. 6 in Warrensburg, Missouri.