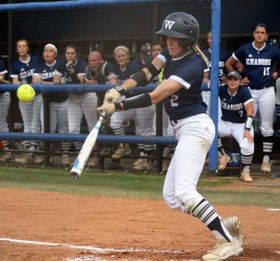 Run hard, turn left: Senior softball player Samantha Stallbaumer turns and prepares to run after hitting the ball in a game. Stallbaumer started her second season at Washburn with a batting average over .450.

Samantha Stallbaumer, a senior from Haven, Kansas, started playing softball before she was 8 years old. She played at Haven High School, and after graduating, she began her college softball career at Oklahoma City University.

After competing at the NAIA level of collegiate athletics for two years and being part of two national championship wins, she determined that she wanted to move back closer to family and friends. Stallbaumer decided she would challenge herself by moving to a NCAA Division II school, either Washburn University or Pittsburg State University in Pittsburg, Kansas, and she ultimately chose Washburn.

“I chose Washburn because I like the area better and I also thought it would be a good opportunity,” Stallbaumer said.

Now in her second year at Washburn, Stallbaumer has enjoyed the relationships she has been able to make with the other softball players and how they have pushed her every day to get better. During the 2018 season, Stallbaumer led the Mid-America Intercollegiate Athletic Association with 74 hits, leading her to receiving first team all-MIAA honors.  She had a .392 batting average, started all 52 games and stole 31 bases out of 32 attempts. This season Stallbaumer is pushing herself to be an even better player.

“I want to bat over .4 and also have the most steals in the conference,” Stallbaumer said. “And a huge goal that I would like to have is getting conference player of the year.”

For Washburn’s head softball coach, Brenda Holaday, having the skills that Stallbaumer brings to the team is something she greatly values.

“Samantha is our starting center-fielder and so she’s kind of the captain of our outfield for sure,” Holaday said. “Defensively, she brings a great deal of experience along with a lot of speed. At the plate, she’s our leadoff hitter, so what she does there really dictates what we’re kind of able to do offensively. Additionally, she’s really grown as a leader in our program and she’s a kid who carries herself with a lot of confidence.”

Since transferring to Washburn, Stallbaumer has had to adapt to the amount of work it takes to be a college athlete at the Division II level. Through this adaption, Holaday has been able to witness the growth Stallbaumer has made.

“Even though she already had the talent, there was just a lot of molding and shaping that needed to take place,” Holaday said. “So, for me, to see the growth in her as a human being from a year ago to now has been really rewarding to see.”

Holaday looks to see Stallbaumer bring her leadership day in and day out, as it is what helps their team grow and be the best that they can be. As a coach, she appreciates how hard Stallbaumer pushes herself and how she doesn’t settle for her current abilities.

“She’s the type of kid that just can’t settle and be content with where she’s at because she’s already one of the better players on the team,” Holaday said.  “But our goal for her in her senior year is to reach her level best and be the absolute best player she’s capable of being.”

Stallbaumer is majoring in kinesiology with an emphasis in exercise physiology. After graduating from Washburn, she plans on applying to a cardiac ultrasound program.