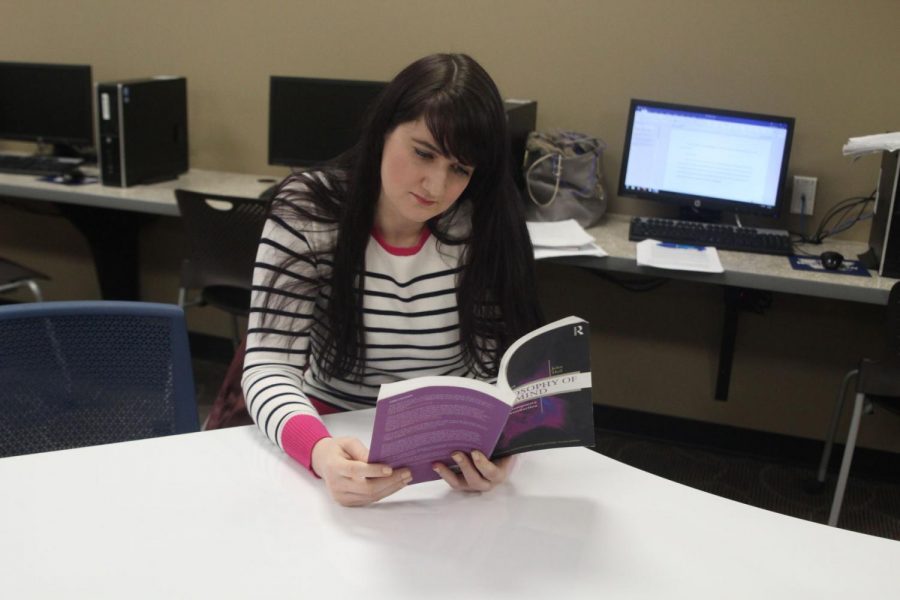 Where does knowledge come from? This is the question Rachel Alexander, a senior majoring in philosophy and economics and minoring in English, is focusing her attention on for her philosophy senior thesis. As a philosophy major, she has other burning questions about the fundamental questions of life and the universe. How can free will exist in a deterministic universe, assuming that it is deterministic? Where does morality come from if there isn’t a God? How does consciousness arise and how do we have experiences?

Alexander realizes that philosophy is seen by many as too concerned with the small details or indecisive. She thinks, however, that people don’t see the deeper implications of the questions it asks.

“You hear statements thrown around like, ‘If a tree falls in a forest, and no one is there to hear it, did it fall?’ to sum up philosophy. But people don’t really understand that philosophy is much deeper than that. It asks the deeper questions about life,” Alexander said.

Her foray into philosophy actually began by accident.

“I took a philosophy course called ‘Intro to Logic and Critical Thinking’ without knowing that it was a philosophy course. Before I took that course, I had the same attitude about philosophy that most people do now,” Alexander says. “As soon I took the course, I fell in love with it.” And that was that. She fell down the rabbit hole of knowledge and inquiry.

It’s not only about the questions involved but the way philosophers think through the questions that Alexander admires. She knows people worry about the seemingly unstable financial end that philosophy may lead to but still advocates for the subject, for her, it also teaches critical thinking skills.

“These skills help you in all aspects of your life. People who think critically can arrive at a relatively unbiased position,” Alexander said. “Taking philosophy classes has helped me with my other classes. It has made those classes easier because I can look at the issues presented in those classes with a philosophical lens, critically. Actually, the philosophy classes I’ve taken have been the hardest.”

This rigor pays off too, as philosophy students do better than most in standardized tests. This is a fact recognized by Alexander.

“If you look at GRE results, philosophy majors are the ones who constantly score the highest in [analytic] writing, verbal [reasoning], and quantitative [reasoning] sections,” Alexander said.

As for the areas she enjoys in philosophy, those are logic and ethics. She struggles with metaphysics and epistemology but believes they shed light on life’s fundamental questions. She would love it if Washburn had offered logic classes other than the three it already does. A philosophy of education course would attract her as well, as would a class exploring morality.

Philosophy has been tough for Alexander, but she is enjoying it.

“It involves a lot of reading and writing. And with philosophy, you have to re-read a text two, three times to get it. You must be continually thinking about it, folding an issue over in your mind. It’s not an easy major,” said Alexander.

But, for Alexander, the acquisition of knowledge and the building of a robust, critical mind sounds like a good deal to get out of the subject.