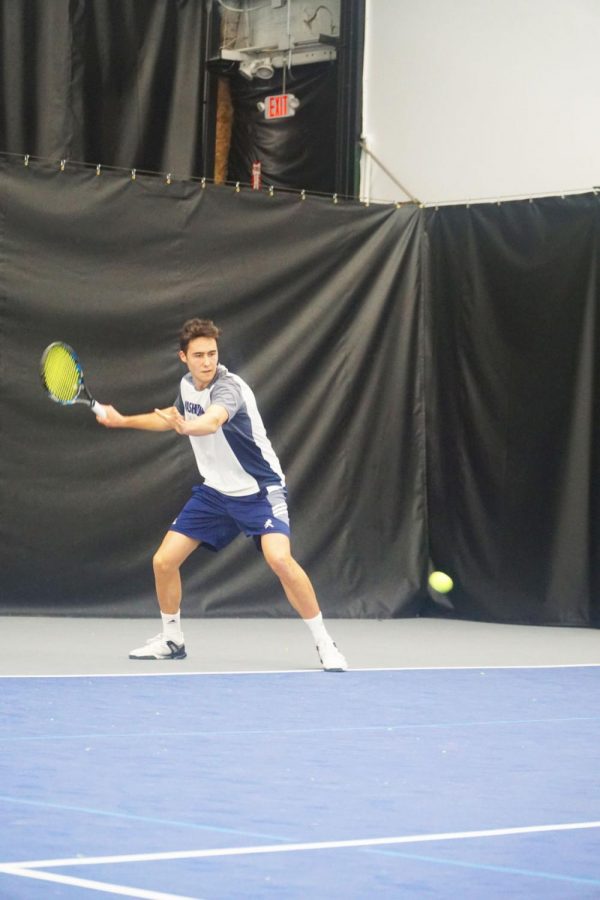 Sweeping success: Marc Roura Casi sets up to smack a forehand during his singles match against Newman University.

Men and women’s tennis crushed Newman University during their first home match of the season Saturday, March 2. The women took the Jets down 7-0 and the men came out on top, 5-2.

Freshman Svea Crohn hardly lost a game in the fifth singles spot, ending her match in 6-1, 6-0 sets. Junior Jaqueline Engelbrecht claimed the No. 1 singles victory against Newman’s Liza Gerasimova 6-1, 6-3. Sophomore Maria Soler Valverde held her ground in the No. 4 spot with a 6-1, 6-2 win.

The Ichabods only dropped one game during their doubles matches against the Jets. Senior Alexis Czapinski and junior Logan Morrissey crushed the No. 1 match 6-0. Soler Valverde and her partner, freshman Kinsey Fields, never dropped a game in the No. 3 spot with a 6-0 score. Engelbrecht and Crohn defeated the Jet’s No. 2 team 6-1.

“We came out strong in doubles,” Engelbrecht said. “That set the tone for the entire match and we were able to take care of business.”

The win against Newman puts the women at 6-1 in their season overall.

“As a team we feel great about the season,” Engelbrecht said. “We’ve had some really great wins, which has us feeling pretty confident going into conference play.”

The men dominated in doubles, winning all three matches. The No. 1 team, Haase and freshman Luke Howard, came out on top 6-2. Roura Casi and sophomore Raul Dicu also went 6-2 in the No. 2 spot. Eidenmueller and junior Chase Brill won at No. 3 with a 6-3 match.

The men went up against Newman without their usual No. 1 player, senior Alejandro Valarezo, who is currently out with an injury. Despite having a man down, the Ichabods stood their ground and played a solid match.

“It was strange coming out without our number one player, obviously,” Eidenmueller said. “But we managed pretty well.”

The victory over Newman is just the beginning for the Ichabods as they look to improve throughout the season.

“We did pretty well last year, so we’re trying to live up to that,” Eidenmueller said. “We want to prove to everyone else, but also to ourselves, that we can do it again and be even better.”