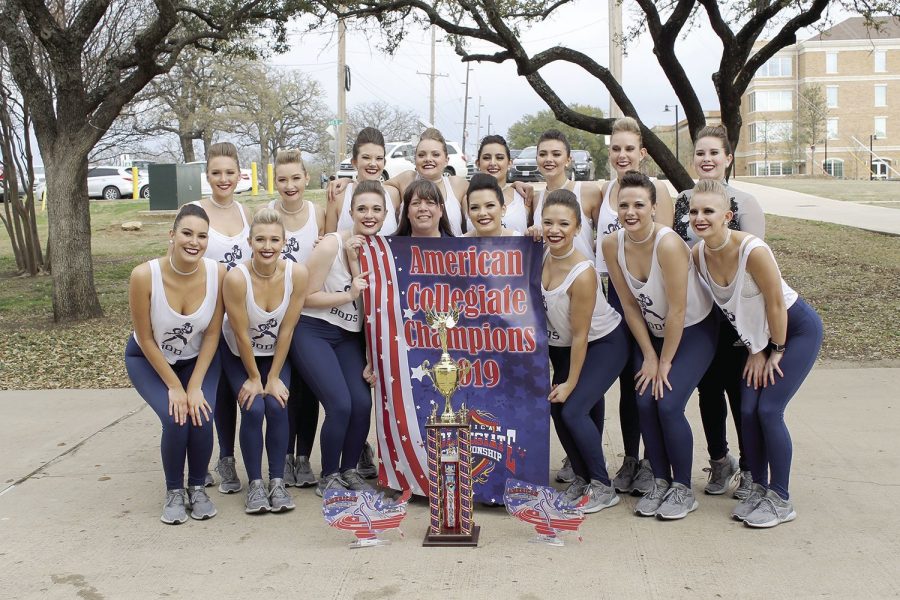 The Blues’ two routines placed them first in jazz and hip hop at the 2019 American Drill Team National Competition. The team scored a total of 288, placing them first overall for Division 2. This is the first year there was an overall category in the American Drill Team National Competition. Due to a tie in points, the 2019 national champion title is shared with another university.

Although the team dances at home football and basketball games, nationals are the Blues’ main focus during their season. Learning both routines in a total of four days, the Dancing Blues put dozens of hours into perfecting their championship dances.

“Nationals was surreal. Being my last year, it was sad, but very exciting,” said Hogan.

“Being on the floor, holding hands with everyone and hearing them call every single one of the runner-ups… We were just looking at each other shocked, waiting to hear our name,” explained Hogan. “Once they called us, we were crying and shaking and just so happy that all our hard work paid off.”

Hogan transferred from Kansas University her sophomore year of college to become a member of the Dancing Blues. She has been a Blue for three years, serving as captain two of those years.

Price has been a member of the Dancing Blues for three years. She is one of the three captains.

Hogan feels she’s grown both as a dancer and a person since becoming a Dancing Blue. “It has taught me a lot about responsibility and what it takes to be a good leader,” explains Hogan.

Now led by their former studio dance coach, the three captains, Michaela Trobough, Kassandra Hogan and Abby Price, have danced with Angie Price since they were young.

Prior to 2018, the Dancing Blues competed at nationals only every other year. After lots of fundraising and hard work, the team made it a goal to attend nationals three consecutive years.

To compete at nationals takes about $10,000. Thus, the Dancing Blues held fundraisers throughout their season to attain the funds.

“During our season, we do all kinds of fundraising to pay for nationals. We sold sponsorships, doing car washes, clinics and did a lot of other fundraising,” said Price. “We work hard. Not only in dance, but to fund our way to nationals.”

They practice three times each week during their season, which spans from July to March. Being a Dancing Blue takes dedication, responsibility and hard work. During practices, the team tackles new dances for half-time performances while also perfecting their two national routines.

“We put in hours and hours of work for those 3 minutes on the (dance) floor,” said Hogan.

During basketball season, the Dancing Blues sometimes dance 16 hours a week because of double-headers and having multiple games in a week. Hence, dancing is a part-time job itself.

All of the team members are full-time students, along with being dancers and working jobs. Although life can be busy at times for everybody, the team still maintains great chemistry, on and off the floor.

“This year’s team has a really good relationship with each other. We have such a great team dynamic,” cheerfully stated Price. “I think (it’s) probably the best one I’ve ever had on a team here at Washburn!”