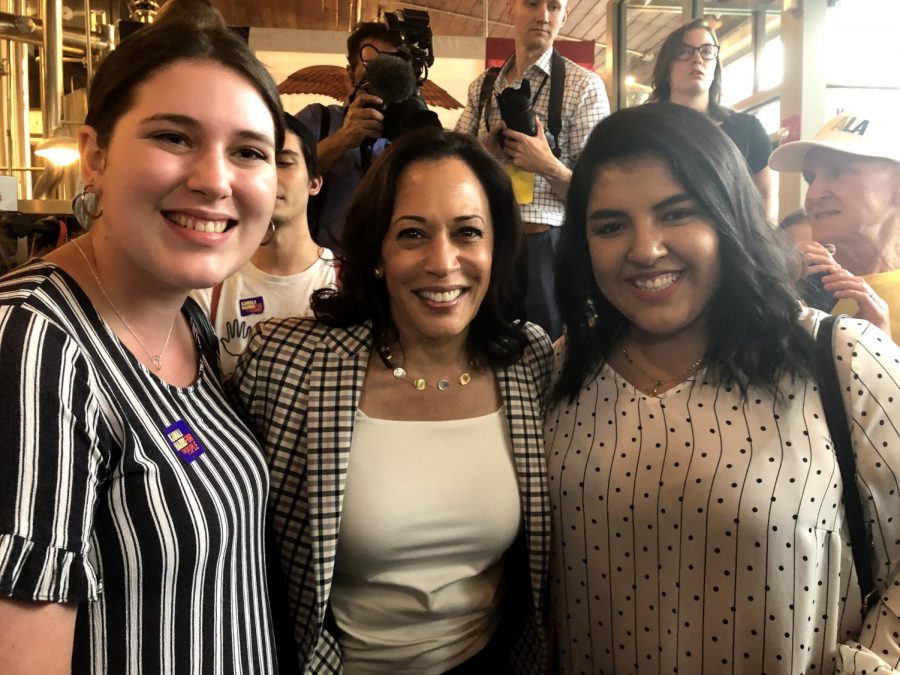 Senator Kamala Harris poses with two Washburn students during the Iowa Caucuses. She was more than willing to pose for a photo or two with her rally attendees.

The November presidential elections are just a few months away. Many things are still uncertain, such as how voters will participate and what impact the viral pandemic will have. However, one less thing is uncertain now that Presidential candidate Joe Biden has finally announced his running mate for the upcoming election: Senator Kamala Harris.

This announcement came on August 11 after months of waiting as Joe Biden had yet to pick his running mate for the November election. As pressure mounted, Biden finally chose his vice-presidential candidate who came from a short list of other suitable figures such as Elizabeth Warren, Val Demings, Stacey Abrams and Keisha Lance Bottoms.

Kamala Harris is the junior State Senator for California, a position that she has held since 2017. She was born in Oakland, California to Shyamala Gopalan and Donald J. Harris on October 20, 1964. Her heritage includes Indian from her mother’s side and African-American on her father’s side. She also attended both a Black Baptist Church and a Hindu Temple in her youth.

Harris’ background includes equal amounts of politics and law. She graduated from Howard University in 1986 with a degree in political science and economics. Later she attended the University of California, Hastings College of the Law where she graduated with a Juris Doctor in 1989 and was then admitted to the California Bar in 1990.

After graduation she would go on to hold two important positions in California law: district attorney for San Francisco (2004-2011) and Attorney General of California (2011-2017).

Prior to becoming Biden’s VP pick, Harris was a presidential candidate, participating in the Iowa Caucuses in the fall of 2019. A group of lucky Washburn students were able to get an up close and personal view of Harris while she was on the campaign trail, learning more about her views and talking points.

“It was really cool seeing her in person for the first time,” said Melissa King, a senior Political Science and Mass Media major. “She’s very engaging and has a lot of energy whenever she’s on stage.”

“I liked how she could appeal to just about anyone, especially minorities,” said Mayela Campa, a senior Political Science and French major. “Both of my parents are also immigrants, which is one thing that really attracted me to her. I also aspire to be involved in my community like she was and become involved in law studies.”

Senator Harris officially entered the race for the 2020 Democratic nomination for President on January 21, 2019. One of her primary talking points included establishing a tax-cut for families making less than $100,000 a year. She had a rural development plan that would have provided $10,000 a year in tax credits for every full-time job created in rural areas. She also proposed to invest $80 billion to provide broadband internet to every American home by 2024. Another policy she pushed for was Medicare for all.

“I am running for president to make sure there is Medicare for all,” said Senator Harris. “Not Medicare for some. And to ensure that you also get choice, because I heard some folks who say, Kamala, don’t take away my private plan.”

One of Senator Harris’ most definable qualities while she was on the campaign trail was her willingness to be a “tough fighter” when it came to dealing with her opponents, including President Donald Trump.

“We are going to have to successfully prosecute the case against four more years of Donald Trump and it will take a prosecutor to do that,” said Senator Harris. “And I think we are working with a pretty good, long, rap sheet.”

Sources agree that Kamala Harris is a strong pick for Joe Biden’s running mate in the upcoming November presidential election. Her background in criminal justice and politics combined with her affinity for minority rights and appealing healthcare policies will no doubt help to boost the Democrat party’s chances at the end of the year.