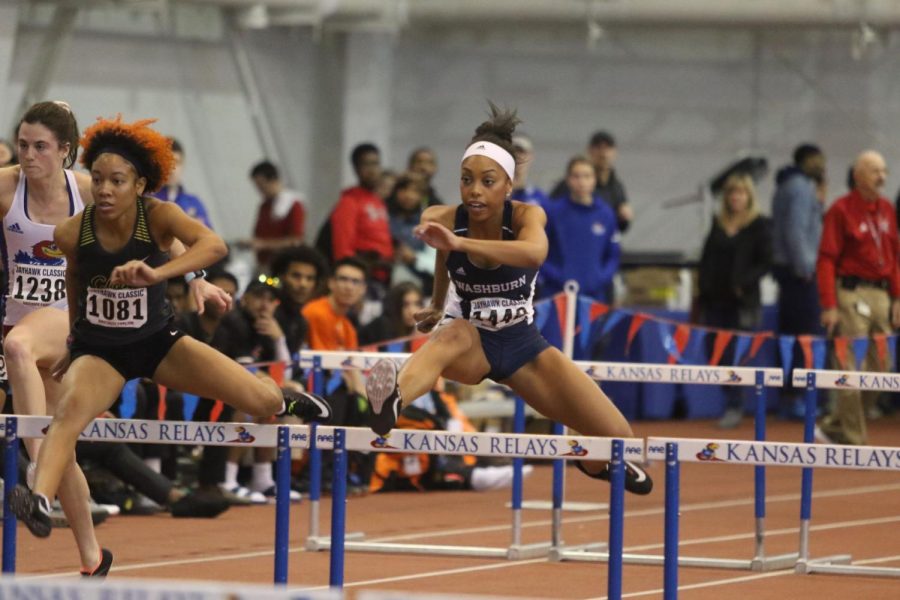 Upperclassmen: Tyjai Adams is in the midst of her third season on the Washburn track team. She is one of the few athletes who has been here for all three years of the revamped program.

The Washburn track and field teams had an extremely successful indoor season and right now are gearing up for the fast approaching outdoor season. With the program only in its third year back as a Washburn sport there aren’t many upperclassmen.

One athlete who came here three years ago and helped get the program started back up is Tyjai Adams. Adams competes in several hurdles and sprinting events on the track.

Adams made her way to Washburn with track being one of the sole influences on her decision. Her recruiting trip to Washburn was a bit different then what she encountered elsewhere.

“It was different because there wasn’t a team,” said Adams. “So, I didn’t get to meet the other girls or go to dinner with them or anything, but I really liked the campus and Coach Babb was really cool.”

Washburn was Adams’ last visit after already taking visits to Pitt State and Emporia State, but it turned out to be the best decision for her.

Adams hails from Hutchinson, Kansas where she was raised by her parents Damien and Tyrece Adams. Her father just started working at a new company similar to Boeing that builds airplane parts, while her mother works full time for Advocare which deals with vitamins and supplements.

While in high school Adams was extremely successful on the track placing at state in different hurdles events multiple times. Her claim to fame however, will be that she won the state championship in the 100m hurdles her senior year in a school-record time.

That championship came after a year’s worth of hard work and motivation after being denied a title the previous year.

“I worked really, really hard for it,” said Adams. “My junior year I got second by like a tenth of a second so that kind of fueled me and I worked all summer long and it transfered and I won.”

Upon arriving at Washburn, Adams discovered that she liked the small school feel of Washburn. She said it’s not high school size small, but that it’s small enough to where everybody pretty much knows everybody, and she enjoys that aspect of being an Ichabod.

Adams is majoring in health services administration because it’s a degree that covers a broad spectrum of job opportunities. She wants to work in a management position somewhere in the healthcare field, but ideally would like to end up in a plastic surgeon’s office.

Skin care and makeup interest Adams the most of, so she feels like she would be right at home working alongside a plastic surgeon.

When she’s not competing or doing school work, Adams is most likely at work where she is interacting with young children. She works at an early learning center called Beautiful Savior and helps out in one of the pre-school classrooms.

Between work, school and track that doesn’t allow for much spare time, but something Adams enjoys doing is traveling. She has many destinations in the US she would like to see, but she would also like to go back to Cancun, Mexico which has been her favorite place she’s been so far.

“I love to travel,” said Adams. “I would much rather spend my money on a trip or a flight than on anything materialistic.”

There won’t be much traveling in the near future however, because Adams and her teammates will be preparing to have a strong outdoor season.

With the family atmosphere on the track team all the athletes enjoy being around each other and competing together.

“Ty is always supportive of everyone and is a great leader,” said fellow sprinter Darian Hillebert. “She never ceases to make me laugh and she inspires our teammates to continue setting and achieving goals.”

The outdoor track season will get underway March 22 when both the men and women’s teams will travel to Emporia State with hopes of no snow and warmer weather.