Letter to the editor: Diversity and Seclusion? 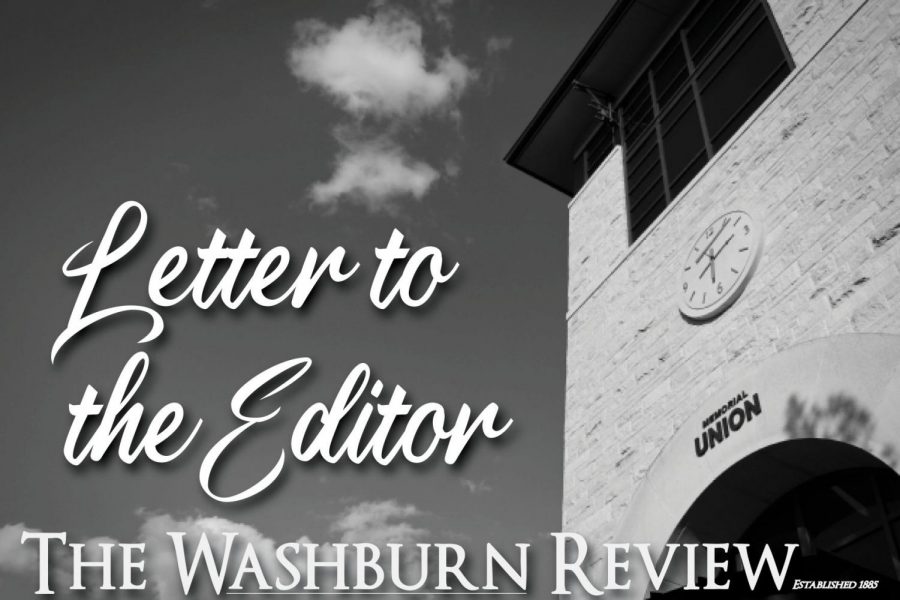 Washburn University, a university that prides itself on cultural diversity, open-mindedness, education and above all, the freedom to engage with others and learn from one another, or at least that’s what the foundation ideology of Washburn is supposed to be about.

What do we do when due to political agendas, opinions and beliefs of others are so outspoken they do not afford the same respectful courtesy for others to speak their minds and opinions on matters because that group has separate beliefs from those who claim they are entitled to more of an opinion than others because of their class?

You should ask the students who attended the enlightenment rally on Monday, March 18, 2019, with the result being people walking out because they felt the environment they were in was nothing short of, “hostile and so aggressive they thought they needed security there.”

A cultural group on campus did nothing short of show nothing but disrespect towards others in the meeting, for starters showing up late in the middle of a faculty member speaking, and then addressing the issue at hand with a hostile voice, and finally cutting others off from speaking their viewpoint.

One student in particular was singled out from the crowd when [that person] wanted to ask a question regarding a recent incident involving a student video that showed the individual quoting song lyrics that the group found “offensive.” (This video in question was actually the reason behind the rally.)

The response? The student was met with discrimination and otherwise, disdainful comments aimed at his ethnicity while he remained unpolitical and unaffected otherwise, his attempts at speaking to say that he agreed with the hostile group’s position on the manner in particular were shunned out and he and a friend left the assembly under the fear of retaliation and aggression.

This has since become too often a response that many people feel is wrong and calls for accountability measures. Or at the very minimum, a reality check.

But what can someone do when faculty members feel the group in question had the right to speak their minds without any regard for the thoughts or opinions of others?

For starters, let’s consider some basics. First, be respectful. Yes, everyone has the right to have a voice, but nobody deserves to have their voice shut out because people do not agree with what they have to say. Plus, to not show respect to others violates the Student Code of Conduct Core Values.

Second, consider your appearance. How you treat others in a debate or a conversation is a reflection of yourself as a person. If you are rude, aggressive, combative and interruptive, what does that say about your personality and character, or the people who raised you for that matter? Would your behavior make others want to be associated with your group or would they be too embarrassed?

Third, back your opinion up with facts. If you disagree with an opinion, that’s fine, but explain why you disagree and come up with an educated response other than, “I don’t agree with you because you’re [a member of a protected class].” Some of the most innovative minds come from all ethnicities.

Also, don’t raise your voice. Creating a hostile environment for others does not just make the conversations more difficult and less educated, but it violates the Student Code of Conduct Core Values regarding Collaboration and Innovation. Collaboration is working toward common goals with others in the University and the community while valuing teamwork, participation and diversity of ideas and perspectives, and innovation is encouraging, considering and supporting development of ideas by fostering individual ingenuity and creativity, and creating an environment with opportunities for growth and change.

So with that in mind, let’s consider when we have a group of students yelling and cutting other students off during a peaceful assembly to address recent grievances. Are we really reflecting our university core values? And what about the core value of accountability by not taking action against said individuals.

Now, time for a reality check.

First, employers aren’t going to offer you a “safe space.” In the real world, when someone says something that offends a person, they will most likely tell you just to let it go or get over it. We are adults. If someone says something that offends you, unless it’s preaching to advocate violence or a criminal threat, get over it. It’s just the dog-eat-dog world we live in.

Second, you are not entitled to anything. On a college campus, there are some specific protections, grants and freedoms that a student is entitled to because they fall into a specific group of students. In the real world sometimes you get offered the short end of the stick and you can take it or leave it because there are plenty of college graduates who would just be thankful to have that job.

Third, we are all the same. Take away the backgrounds, the socio-economic status, the political positions and everything that we think defines us, in the end we are all the same, flesh, bone, blood, we live, we breathe, we die. We can all lose everything we gain in an instant, and nobody should feel different just because they belong to a specific class of people.

Fourth, you will not be offered a job preference based on which group you identify with. Employers look at your level of work experience, educational background, your successes in college and your student standing at the university. If you participate in an event that can leave you with a black mark on your record, everything else won’t matter. You will only be noticed for being associated with a group that was known to “cause trouble.” Don’t believe it? You should go back to philosophy or a sociology class and ask about the effects of labeling and social control theory in society.

Fifth, the world does not conform to how you want it to be. Just because you don’t agree with how things are in the real world does not mean that it will change. If you are offered a government job but in a couple years you hate the presidential candidate, are you going to quit your career after everything you accomplished? What if you have a family to consider? How will that make you look? What are the consequences?

Lastly, our motto is “Non Nobis Solum,” not “Et Aliquamdiu.”

These are just a few things to consider from someone who has lived a while.