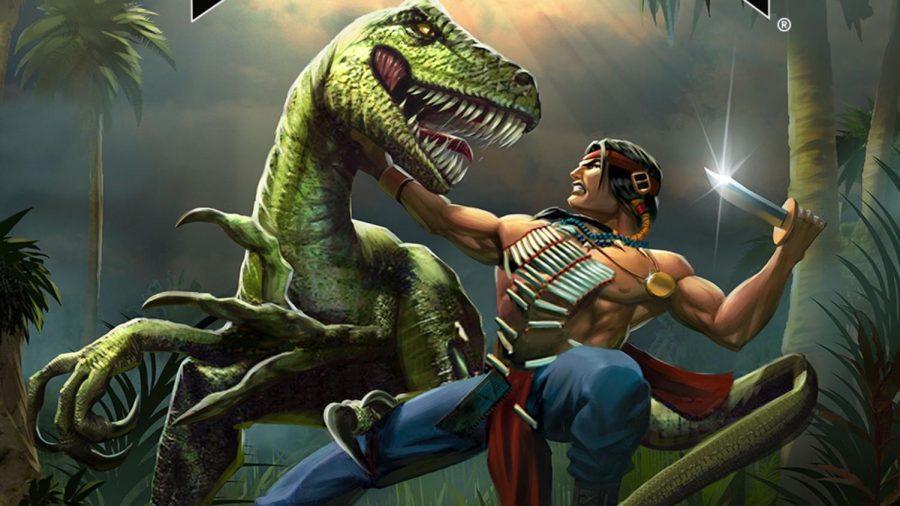 Rip & Tear:  A staple of my childhood, Turok remains a great shooter, antiquated or not. Pictured is art depicting protagonist Tal'Set, dispatching a dinosaur.

When I learned Nightdive Studios would be releasing their excellent upscaling and port of Turok and its sequel for the Nintendo Switch, I was very excited. “DOOM” was a wonderful part of the Switch library, and I was excited to see more shooters on the platform. Perhaps one of the very first games I had every played, the recently released switch port is a great excuse to play the classic FPS

“Turok: Dinosaur Hunter” developed originally by Iguana Entertainment, was originally released in 1997 for the Nintendo 64 and Windows. One of the products of the golden age of FPS games, It spawned a small franchise, with a few sequels, a prequel, then a rather weak reboot.  A few years ago, Nightdive ported both Turok and Turok 2 to windows, with other platforms following it. While not as well known as “Doom,” “Half-Life” and “Quake,” Turok is still worth a play.

In Turok you play as Tal’Set, a time-travelling warrior who must shoot through dinosaurs, hostile humans and a plethora of other strange enemies, going through a variety of jungle type areas accompanied by a matching nostalgic soundtrack. One of the biggest mechanics of the game is how you unlock levels. You must find all the keys hidden within each surprisingly expansive level, in between you shooting your way around the area.

The gunplay itself holds up incredibly well for its age. It is so fun and challenging to run around killing dinosaurs with the variety of weapons you are given. You are given a bow with exploding bolts, an auto shotgun and a diverse 12+ set of other weapons that bring me back to when my age wasn’t in the double digits.

One big feature is some platforming to mix things up on the maps. While I thought it would age terribly, the platforming doesn’t. While your jumps have to be calculated to an extent, and I fell several times, I had no problem with what easily could have been intensely annoying.

However, the game has one big underlying issue, and that is the aforementioned uber-antiquated puzzle hunt. For me, old school shooters are just about shooting things and chewing bubblegum. The maps of each level were so big they were often maze like, and I was often not in the mood or patient enough. Doom has a free pass with this as it isn’t too complicated and out-of-the way to do, but looking through an entire map just to find another key got old very quickly. In addition, I found the $20 price tag steep, but gouging is expected with Nintendo Switch games.

Overall, looking past the nostalgia, this port is great. It runs steadily 100% of the time, and the portability does the game many favors, especially using the gyro aiming the Switch has. In some ways “Turok: Dinosaur Hunter” has remained a fun fps. There really is a toss up between the great shooting and the annoying key hunt, but I was glad to play one of my favorite games and see it mostly live up to my expectations. It is unquestionable that this is a near perfect port.