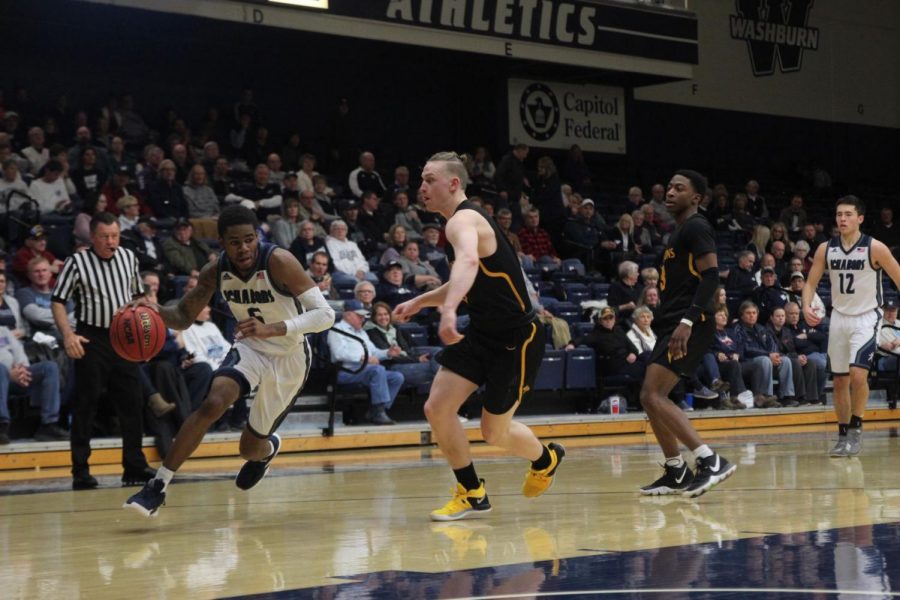 Earlier in the day, the women’s team dominated Missouri Western State from the opening tip to the final whistle on Senior Day. All five seniors for the men’s team suited up to start the Ichabods. For the seniors, Saturday went according to plan.

The first basket came at the hand of senior guard Emeka Ogbonna, who broke his career high in points with a three pointer. Ogbonna would not finish there as he gave the Ichabods a 7-0 lead early in the first half, but it was not all Washburn. The Griffons were able to cut the lead to 9-7 with 15 minutes left in the half. This changed quickly as the Ichabods would go on a 12-3 run to put them up 21-10. The Griffons would try to keep the Ichabods from extending the lead any further. Slowly, the Griffons cut the lead to four after a three pointer. One of the key ways the Griffons were able to get back in the game was through the free-throw line. Through the use of the free-throw line, the three ball and good ball movement, the Griffons grabbed their first lead of the game with 5:06 left on the clock in the first half. The Ichabods and Griffons would trade the lead multiple times before the end of the half, but the Ichabods would head into the break with 46-43 lead after sophomore guard Tyler Geiman nailed a deep three-point shot.

Out of the gates, the Ichabods looked to erase any doubt of winning. Quickly, the Ichabods raced to an 8-point lead over the Griffons early in the second half. With 12:56 left in the game, the lead doubled to 16 after a three from senior guard Javion Blake. The Griffons were not a foe that was going to shy away from a fight. They were able to shut down the Ichabod offense long enough for them to get within three points. The Ichabods were able get an 8-point lead again from the shooting of Blake along with, freshman forward Sevon Witt and senior guard Tyas Martin.

With 1:37 left in the game, the Griffons drove down and made a layup to cut the lead to 88-85. While the Griffons were cheering for making a basket, Martin raced back to catch a deep pass from Geiman to answer the Griffons while being fouled to give the Ichabods a 91-85 lead. The Ichabods would go on to defeat the Griffons 93-90 after a last second shot from the Griffons ricocheted off the front iron.

Only having a career high of two points, Saturday’s outburst of 11 was huge for Ogbonna and the Ichabods.

“My mindset was just to do everything that I can for the team. I didn’t think that I was going to come here and score everything. Overall, it is a team effort,” Ogbonna said. “I want to thank my teammates and my coaches for everything. I wanted to go out with a bang since it is my last home game.”

After defeating Missouri Western State on Senior Day, Blake was happy to grab the win and prepare for the MIAA Tournament next week.

“You wanna play in those good games. Those packed, heart racing games and that is what happened tonight,” Blake said. “I was glad that we were able to come out on top.”