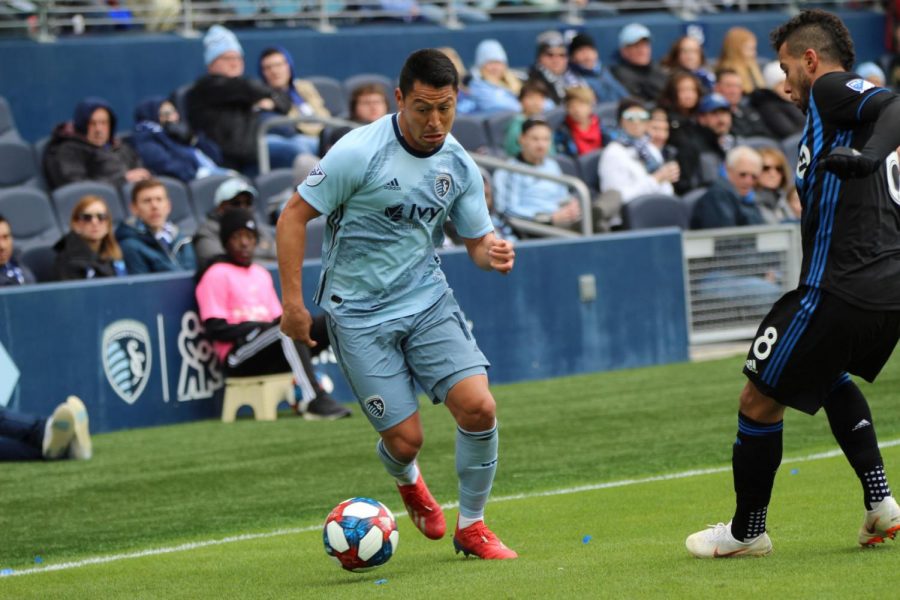 Tap n go: Midfielder, Roger Espinoza moves the ball down the sideline past the defenders to set his teammates up with a shot. Sporting KC went on to defeat Montreal Impact 7-1.

On Saturday March 30, before Sporting Kansas City played host to Montreal Impact, Mother Nature decided to switch things up and change from beautiful sunny skies to gloomy rain and snow. The weather made for colder conditions setting the stage for a wild ride in Children’s Mercy Park. We asked for a wild ride and we got a wild ride in the form of a 7-1 demolition of Montreal. No one had a larger part in the huge victory than forward, Krisztian Németh who recorded a hat trick in the match.

The first two minutes of the game set the stage for what was to come. Only 2 minutes into the game, forward Gerso Fernandes found himself behind Montreal’s backline and set himself up for a rocket for the first goal. Instead, he hit a little dinker that rolled on past the goalkeeper for the first goal of the game. The goal did not count due to Fernandes being offsides.

It did not take long for the first real goal to be scored after that. After Nemeth set up to shoot the ball, he kicked the ball into the lone defender keeping him from scoring his second goal of the year, but forward, Johnny Russell recovered the ball and fired a rocket into the top left corner of the goal.

In previous matches this year, Montreal has proven themself to be a formidable foe, even manager Peter Vermes lauded them postgame. While they were a solid team, Saturday was a day that Sporting was not going to be stopped.

Sporting would not stop there in the first half. In extra-time, Fernandes found midfielder Felipe Gutierrez streaking down the middle of the field. Gutierrez leaped in the air to send the third goal of the game over the goalkeeper’s head. Shortly after that, the whistle for halftime blew and stopped the barrage of Sporting KC. Sporting had built up a 3-0 lead to end the half.

Once the second half started, the barrage started back up again. This time it only took five minutes before Russell put away his second goal of the match.

By the end of the game, Sporting had tacked on three more goals. Two came from Nemeth and one came from 16-year old forward, Gianluca Busio, which was only the second goal of his career.

Sporting had scored a full touchdown before Montreal was finally able to tally a goal of their own with only one minute left in the game.

Once the whistle blew for the game to end Montreal’s misery, Sporting had finished off a game that saw them score more goals than half of the teams in the MLS have scored all season.

As a performance, Sporting KC played as well as they have all year. For Russell, there was not a question of if they performed their best.

“That’s probably our best[performance] of the year. I think both legs against Toluca we were brilliant. I thought throughout today, everyone was outstanding. It’s a really flattering scoreline but it could have been more, as well. It just shows how much quality we played with today,” Russell said.

Even though Busio scored a goal last year away from home, his goal today at home was definitely better a better experience in his eyes.

“It’s a great feeling. Just scoring goals is always a great feeling and especially doing it front of your home fans. It’s a really big thing for me. I’m just so happy I could put it in,” Busio said.

The next home game for Sporting will be the final leg of the CONCACAF Champions League Semi-Final round where they will take on Monterrey Thursday, April 4.