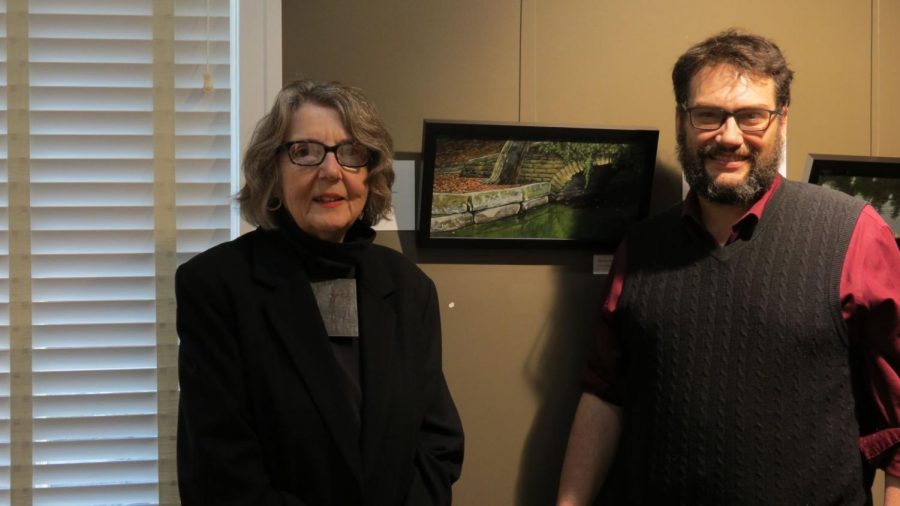 Two Ponders or not to ponders: Barbara Waterman-Peters and Dennis Etzel, Jr. pose with one of their favorite collaborations. "Two Ponders" was a collaboration from the two artists pairing poetry with paintings, sketches and photography.

If you’re looking for something to do, or even if you’re not, swing by the NOTO gallery, anytime until March 28, located at 935 North Kansas Ave, to check out “Two Ponders,” a collaborative art show featuring poetry paired with paintings, sketches and photographs. Barbara Waterman-Peters and Dennis Etzel, Jr. created the pieces together over a period of six months.

Etzel, Jr. explained how the idea came to fruition.

“So I was granted a sabbatical and …what really brought it around is just, I love working with artists and I wanted to take it to the next step and do a true collaboration, Etzel, Jr. said.

Etzel, Jr. went on to say, “I just want to thank Washburn University for doing that and giving me the semester to have time to do this.”

When it came to finding someone to collaborate with, Etzel, Jr. had no problems thinking of the right person for the job.

“I thought of Barbara… I admired her work,” Etzel, Jr. said.

The idea for the work was something the artists wanted to be Topeka centered and after meeting at Gage Park one day to discuss the project, they landed on the pond located outside of the rose garden.

Though both artists felt the location to be a bit of a cliché, they also considered the mythos and archetype and how water is sustaining and life giving.

“We wanted this to have that direction but we didn’t know where it was going,” Etzel, Jr. said. “We wanted the project to reveal itself to us.”

When Etzel, Jr. presented the idea to Waterman-Peters, she didn’t hesitate to jump in.

“I am so honored that Dennis asked me to be part of this because there are many artists in the area he could of asked,” Waterman-Peters said.

The two artists spent many days at Gage Park, some in not so warm weather, working together though doing their own thing.

“He began to write some poems and I began to do some sketches. I didn’t know where they would lead. It just evolved really,” Waterman-Peters said.

The exhibition is set up as a triptych. It shows the past, present and future.

“Time became a central piece too, like a central examination,” Etzel, Jr. said. “Time is a triptych.”

One of the main messages that comes across in the work is the importance of water and how, if not careful, any crises the world sees now pertaining to water, could become much worse and it is everyones responsibility to do their part when it comes to conservation of one of the worlds most valuable resources.