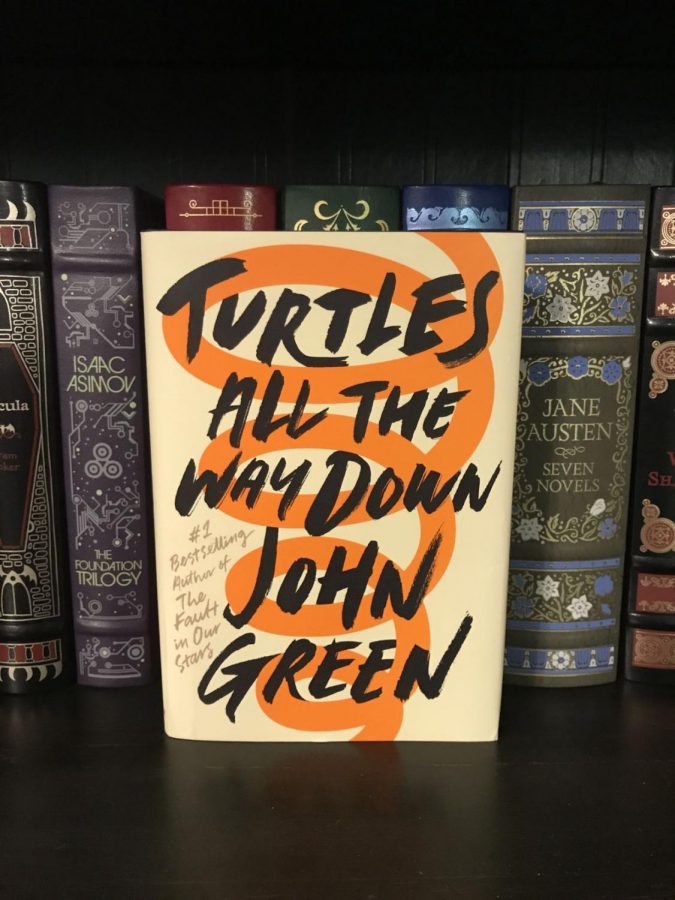 Spoiler alert: This book is not about turtles. Best-selling author John Green does a great job revealing the working minds of teenagers through action and speech, including like, the verbiage that some like, find annoying.

If you feel bad about yourself, read this book to see how much worse it could be. This novel is about Aza Holmes and her struggle with mental illness as she navigates school and relationships while dealing with a severe case of hypochondria that focuses mostly on germaphobia, or more specifically, C diff, short for Clostridium difficile, is bacterium that can cause symptoms from diarrhea to inflammation of the colon, which can be life threatening. In the midst of this unusual  teenage struggle, we find some semblance of a mystery occurring, though the adventure of this particular piece of the story is more filler and ties than driving force. Though maybe not typically done in this fashion, much of this novel speaks to many common problems and concerns for the majority of young people. It seems to be a love story on so many levels, but again, not in a typical fashion.

My first impression of this work was that it was going to be a melancholy read. A teenager, Aza, talking philosophy and biology just did not seem like something I could tolerate, but author John Green kept the science in short bursts while weaving in more commonplace moments in the teenagers’ lives. Some of the story seems written for convenience, such as the mystery revolving around the disappearance of a billionaire wanted by the FBI for fraud, to connect Aza with Davis, the man’s son. These two, who would otherwise have nothing to do with each other, are brought together again, having been friends when they were very young and Aza, along with her best friend Daisy, are interested in finding Davis’s father, not so much in the beginning to help Davis, but rather for the $100 thousand reward for information leading to the billionaires whereabouts. Other than that, most of the story stays grounded in a sense of reality.

Many writers use chance circumstances and coincidence to bring points within the story together but I believe everything should happen in a logical way unless the work is fantasy. This is one of the downfalls in the novel. Without spoiling the story, all I can say is that some minor points are not logical.

I enjoyed the book overall, even though it has a faulty premise, that of the missing billionaire. The struggle of Aza’s health issues is real enough and the steps toward recovery seem genuine. Essentially, this is her story and there is something to be taken from it. I am not sure I ever really connect with any of the characters in this book. There is a successful teenage writer  [Daisy] who has thousands of followers for her ‘Star Wars’ fan fiction that is largely wrapped around the romantic relationship between Chewbacca and Ray, a successful teenage artist, Mychel, who has a gallery showing for his art work in an underground sewage show for hipsters and older art lovers alike and then there is the billionaire’s son, Davis, living in a mansion as the legal guardian of his younger brother while somewhat regrettably living the lifestyle provided by his father. Though none of these characters seem impossible, they are not your garden-variety high school kids. Then there is Aza, a girl with mental troubles that will not help herself by following instructions of those in a position to help her, such as her psycho-therapist. Her mother, a high school math teacher, worries about her, but their relationship seems typical. In addition, Aza’s father passed away when she was four so she also deals with this loss.

Aza is the only believable character with Davis a close second. Daisy and Mychel have their moments, and I suppose their fortune in life is something teenage readers can aspire to, but it may be a little too much of a reach.

Green did an excellent job with the language in this novel. The dialogue rang true and the connotations were spot on. The setting of Indianapolis was a bit unusual for me but does well for this story.

Overall, this was a good read, but given no real solution to Aza’s problems or a satisfactory way of dealing with them, I am not quite sure what point the book is trying to make, and it seems heavy enough to want to make a point.

The inside jacket reads as if this story is going to be a mystery, but as I stated earlier, it seems a scattering of ideas more than a driving force.

If you read this as a mystery, you are sure to be disappointed, but if you read it as a non-typical love story, I think you will enjoy it. I would give this novel four out of five top hats.